TV ALERT
Remember that The Muppets will be performing with Andrea Bocelli tonight on The Jay Leno Show on NBC at 10/9c! 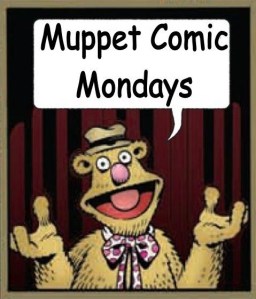 Ryan Dosier – Muppet fans have been eagerly awaiting the release of the new Muppet Peter Pan comic book written by friend of the blog Grace Randolph and drawn by, also friend of the blog, Amy Mebberson. Muppets fans everywhere hoped it would be better than the Muppets’ previous comic book fairy tale adaption, Muppet Peter Pan. Let’s find out if their hopes were fulfilled. 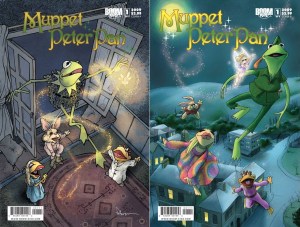 Issue #1 provides us with a back story of how Peter Pan became the green-clad, high-flying, never-aging legend he is today. Sam Eagle guides us through the plot in true Sam fashion—even interrupting the narrator (multiple times) to make the story more American.

PiggyTink (Miss Piggy) discovers Peter Pan (Kermit the Frog) abandoned by his mother (as all frogs are) in a Boston swamp (Sam’s idea) and escorts him off to Neverswamp where he never has to grow older.

Soon, we meet the Darling Children, Wendy, John, and Michael (Janice, Scooter, and Bean Bunny, respectively) who love hearing the stories of Peter Pan and reenacting them.

We then discover that Peter and PiggyTink are spying on the children in hopes of recovering Peter’s shadow from their nursery. Peter lost it one night while listening to one of Wendy’s stories.

But soon enough it is time for the Darling’s to go to bed—as ordered by their maid, Nana (Camilla), who helps them wash up and get in bed. After the children are in bed, their adopted father (Sam Eagle) enters and argues with Wendy about how she needs to grow up. This quickly perturbs Peter, who is a firm believer in never growing up.

Mr. Darling soon goes out for his “nightly voting practice run” and leaves the children under Nana’s care. This is when Peter and PiggyTink sneak into the nursery to find Peter’s shadow. 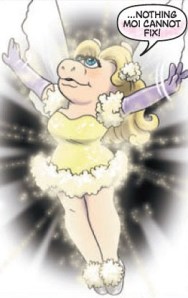 I have never been more impressed with the tone of a Muppet comic book than I was with Muppet Peter Pan. Normally, I attribute the tone to the writer of the comic, but this time I simply have to acknowledge that both Grace and Amy’s work adds to the exceptional tone of Muppet Peter Pan. Everything feels like the Muppets and nothing makes me stop and think, “Wait… (insert Muppet here) wouldn’t say/look like that!”

Kudos to both Grace and Amy for their fantastic work!

WRITING
I am thoroughly impressed with Grace Randolph’s writing of the Muppets in this book. It is absolutely fantastic and each and every one of them shines. Miss Piggy is an exceptional highlight, and Sam Eagle is absolutely perfect. Grace also gets extreme points for writing Janice, Scooter, and Bean Bunny flawlessly. For such sparsely seen characters, Grace really hits them all on the head (not literally, thankfully) and knows exactly how they each should sound.

As anyone who reads the blog knows, I consider Amy Mebberson’s artwork as close to perfect as you can get. It really shines here as we see how no character moves beyond their puppet limit—even though they’re illustrated. Amy really has a great feel for the characters movements and personalities and humors (especially Sam and Bean). It is amazing to see what she can do with Miss Piggy. Each of her characters are absolutely stunning.

Plus, she included an absolutely hilarious sight-gag with Scooter’s glasses. What more could you want?

Muppet Peter Pan has quickly become my favorite of the Muppet comic books from BOOM! Studios. I am just so completely stunned by all of the beautiful work put in by Grace and Amy and it’s a real honor to have interviewed the both of them.

Be sure to pick up your own copy of Muppet Peter Pan as soon as you can!

Kermit the Frog as Peter Pan, Miss Piggy as PiggyTink, Janice as Wendy Darling, Scooter as Michael Darling, Bean Bunny as John Darling, Sam Eagle as the Narrator and Mr. Darling, Camilla the Chicken as Nana.