“That Act Was So Bad, the Frog Could Have Booked It!”
Discovering the Best in the Muppets at Their Worst, Part 2

Justin H. Piatt – Hi, again! Remember me? I’m the one who whined last week about Muppets From Space. Well, here I am again to delve into the unusual cruelty that is…

2.    This is a kid’s movie. This is only bad in that I don’t think the movie succeeds in reaching out to a broader audience. There is a lot of great stuff that I think an older audience can appreciate, but mainly this movie’s aimed at kids, which it does well in talking to that audience. But I’m not talking to that audience, therefore, “This is a kid’s movie” gets mixed in with the bad.

3.    Gratuitous Muppet mooning… What the hey?

4.    I think a lot of people will disagree with me here, but I never liked Pilgrim. I don’t know what it is, but the character kind of annoyed me. Maybe it was the voice. Perhaps not allowing a Muppet performer do the voice detracts from the overall performance. Perhaps I just couldn’t relate to her. Maybe I wasn’t supposed to like her. Or maybe I never actually watched the movie, and that’s why I can’t come up with a good reason. Who knows?

The Good:
1.    Joe the Armadillo. … Wait… He wasn’t actually in the movie, was he? Too bad. I liked Puppety Sockman the Puppet. 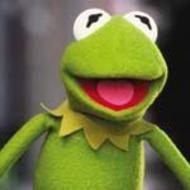 2.    Kermit taking care of his family. It makes me laugh to see Kermit trampled by his brothers and sisters, when all he’s trying to do is help out. Schadenfreude at its finest.

3.    The pet store. Bill Barretta’s performance as Roy the Frog is great opposite John Kennedy as Blotch. Steve Whitmire plays two great characters here. First, Chico, who just cracks me up, and then Jack Rabbit, who is one of the best original one-shot characters in a long time. The song “Life As a Pet” is kinda catchy. Classic Muppets at the pet store. “Oui, oui, poo-poo!”

4.    Multiplying bunnies. Alongside the road at one point, we see two bunnies watching the pet store owner’s truck drive by. The next time someone drives by, there are four bunnies. By the end, there are six. To quote Rizzo, “And this is supposed to be a kids movie!” 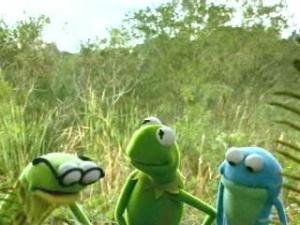 5.    Mary, Dr. Krassman’s assistant. One of the best human performances in the movie. Unlike Krassman, she goes over-the-top, but she doesn’t aggravate me because of it. She does it very well, and she’s always so happy and talkative and good-natured. … And she’s kinda cute, too.

7.    Finally, outtakes. Not only are there outtakes during the end credits, but also as a bonus feature on the DVD. We don’t see enough Muppet outtakes, and they’re always hilarious. We also get a glimpse of Steve Whitmire’s Link Hogthrob voice during these outtakes, which is great.

You may have noticed that the good in Kermit’s Swamp Years far outweighs the bad in this review. That’s not entirely the case. Dr. Krassman just takes way too much away from this movie. It would have been much, much better in my opinion if it weren’t for him. … Da bum!

One thought on “Discovering the Best in the Muppets at Their Worst, Part 2”