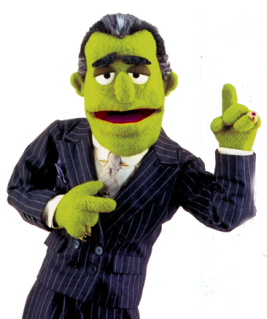 WHO IS JOHNNY FIAMA?
Johnny Fiama is a momma’s boy (and proud of it, bub!), lounge singer, crooner-esque, Tony Bennett obsessed fellow who has his own gentleman’s monkey, Sal Minella. Johnny may not look like more than a pressed suit and a diminishing singing career, but he’s so much more… isn’t he?

No, he is. Johnny is actually an extremely funny character whose humor derives from the situations he finds himself in with Sal at his side. Whether it’s performing an impromptu rendition of “Bohemian Rhapsody” after Sal spilled Mama’s famous sauce (“Mama… Sal dropped da sauce…”), fending off Sal’s advances after he’s been pierced by Cupid’s arrow, or getting a double date with the Hannah twins, Johnny and Sal are another one of those great Muppet comedy teams.

Johnny also loves his Ma more than most other things. So much so that he still lives at home with her (yeah, that’s why). While this aspect of Johnny’s character can also be laugh-out-loud funny–just see what happens when Johnny brings a girl home to meet Mama–it also provides a unique look at Johnny’s tender side. One of the most poignant moments of the entire run of Muppets Tonight! was Johnny serenading Mama with “You and Me Against the World.”

Muppets Tonight! was Johnny’s first appearance in the Muppet world. On the show he hosted his own segment called “The Johnny Fiama Show,” which parodied late night television shows. He also got to meet his idol, Tony Bennett, and even perform with him (after he stopped shaking).

Johnny has been included in each Muppet movie since Muppets Tonight! (excluding Letters to Santa) and each time he was on the screen he was hilarious. In Muppets From Space he and Sal cut Gonzo’s cake for his alien brethren, then proceeded to hassle people about doing so. They pestered Rizzo for his Christmas-light nose and assumed Kermit was drunk in It’s a Very Merry Muppet Christmas Movie. Johnny also acted as the bartender in Mrs. Bitterman’s “Dot” nightclub where he got Statler and Waldorf kicked out. 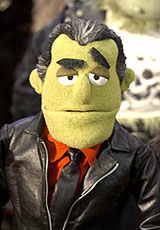 Johnny’s biggest role, however, was in The Muppets’ Wizard of Oz as the Wicked Witch of the West’s lacky. Here, Johnny had an obvious love for the Witch, calling her “Shnookums,” “Mama,” and other such pet names. He was the only one who mourned her melting (besides FooFoo).

Unfortunately, Johnny hasn’t had a speaking appearance since The Muppets’ Wizard of Oz. He and Sal did appear in the Muppet version of “Bohemian Rhapsody” in November, however. So perhaps this means we’ll start seeing more of the duo again.

Johnny was one of the first main characters performed by Bill Barretta. Bill has said that Johnny was inspired by both his father and grandfather. He was even more inspired by the character Johnny Fiama that Bill portrayed in a short film made with his brother Gene that showcases the Fiama Brothers in all of their… glory.

Where did Bill say all of these things, you ask? The Muppet Mindset, duh! (End shameless plug.)

JOHNNY FIAMA PERFORMANCES
As a singer, Johnny has performed many a musical number. Here are a few highlights:

WHY DO THE MUPPETS NEED JOHNNY FIAMA? 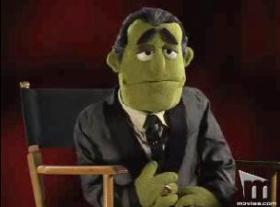 Usually I know exactly what I’m going to say for this section… but here I just don’t have a distinct answer. No, Johnny isn’t exactly an irreplaceable member of the Muppet cast, but he’s still just as important. He and Sal are a hilarious duo rivaling Gonzo and Rizzo, or Rowlf and Fozzie. He’s different from the other Muppets because he isn’t that far out there and strange… but at the same time he’s extremely similar to them. Johnny and all of the other Muppets share the same dream of singing and dancing and making people happy.

Johnny rocks. I sincerely hope that we see he and Sal more in new Muppet projects soon!