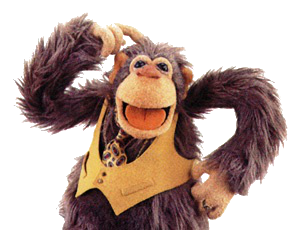 WHO IS SAL MINELLA?

Sal is, first and foremost, the first (and last) line of defense between Johnny Fiama and whoever’s tryin’ to hurt him or his Ma! Sal serves Johnny and worships him like a prince. He has been involved in many of Johnny’s musical  numbers, even appearing to act as Johnny’s manager and promoter at times. He and Johnny also appear to be very close friends, despite the unbalance of power between them.

Sal first appeared in the form we know him in today on the Billy Crystal episode of Muppets Tonight. In the episode, he argues with Bobo about Johnny’s name not being on the guest list for tonight’s episode, only to be beaten and hurled into a moving taxi by Bobo. Eventually Johnny checks his calendar and realizes that he isn’t even scheduled to be on the show that night. Thus, Johnny and Sal’s relationship was born.

In later episodes this relationship would be tested by the likes of Tony Bennett, auditors, unforgiving audiences, boneology, and more. But through it all Johnny and Sal remain close friends and, for some reason, Sal remains in Johnny’s employment.

Sal also appeared alongside Johnny in Muppets From Space, It’s a Very Merry Muppet Christmas Movie, and The Muppets’ Wizard of Oz. In the films, he cut Gonzo’s cake for Johnny, sold his moped to buy Johnny a solid-gold record player, and drove Johnny around on a flying motorcycle, respectively. Johnny and Sal also performed “Bohemian Rhapsody” on the MDA Telethon. 13 million people have not seen that performance.

The most recent appearance of both Johnny and Sal was in 2009’s “Bohemian Rhapsody” viral video.

Along with Dr. Phil van Neuter, Sal is one of the few main Muppet characters performed by Brian Henson. At MuppetFest, Brian “explained that the performers got together with a bunch of random puppets to start working out characters for Muppets Tonight. Bill picked up a puppet and started singing, as Johnny Fiama, but everybody else was fooling around with their own puppets and not paying attention. So Brian picked up a monkey and shouted, “Would you all quiet down and listen to Johnny Fiama!” and Sal was born.” (via Muppet Wiki)

WHY DO THE MUPPETS NEED SAL MINELLA?
I wouldn’t say that the Muppets as a whole need Sal, but Johnny Fiama sure does. No one can replace Sal in Johnny’s life and the two of them need each other (although Johnny sure needs Sal a lot more, but don’t tell Sal that). Without Sal, Johnny wouldn’t really be able to function, nor would he be as down-right hilarious.

Here’s hoping we see more of Johnny and Sal soon!