WHO IS DON MUSIC?

Don Music is the stressed-out piano player and songwriter on Sesame Street. He often tries to write songs, and whenever he gets stuck on a line, he expresses his frustration by banging his head on his piano. After getting help from somebody (usually Kermit the Frog), he succeeds in writing his song and gets joined by back-up singers (usually Little Chrissy and the Alphabeats) who not only show up from seemingly out of nowhere, but also manage to sing an additional verse on the spot.

Don Music has appeared in many “Sesame Street News” segments, and many of these segments follow the same basic format: Don starts by singing a familiar song only to be unable to find a suitable final word, banging his head in frustration. Kermit provides a word to end the line with but Don notes that it either doesn’t rhyme or make sense with the previous line, so Kermit offers a number of changes to each previous line until Don is satisfied with the results.

But some of the sketches vary a bit in format. When trying to write “Row Your Boat” it is actually Kermit who keeps pointing out lines that don’t rhyme or make sense, while Don comes up with most of the replacement lines. When writing “The Alphabet Song” the finished product is actually the actual song as opposed to a parody, and most of the help comes from various passersby who say words that sound like various letters of the alphabet.

But Don Music is not exclusive to the Sesame Street News segments. He once appeared as a contestant on Guy Smiley’s game show “Mystery Guest,” where he incorrectly guessed the segment’s mystery guest.

Don also portrayed the role of Thomas Jefferson in an “American Revolution” sketch, in which he has to write the Declaration of Independence, but is unable to because his quill has broken. Grover helps find him a quill, but not before providing a few things that rhyme with “quill.”

Don also makes a few cameos in Sesame Street: 20 and Still Counting. In one such cameo, he pushes a piano down a live city street while Kermit is trying to ask somebody the question of the day (“Can you tell me how to get to Sesame Street?”). Don’s answer is “Practice!” (which Kermit dismisses, as that’s the way to Carnegie Hall).

WHY DOES SESAME STREET NEED DON MUSIC?
Although he was taken off the show because kids were imitating his habit of banging his head on the piano, Don Music can be seen as a good influence just as much as he can be seen as a bad influence. Don shows that you can succeed if you keep trying (even if you keep needing help). Of course he probably also gives kids the false reality that completing  a song will automatically provide you with back-up singers. 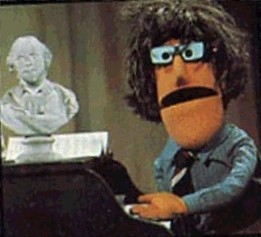