Justin H. Piatt – Do you remember long ago when it was first announced that Jason Segel would be writing the new Muppet movie? Remember his frustration over such Muppet productions as Muppets Underwater and The Muppet Western? Do you remember not remembering those movies? Well, we at the Muppet Mindset recently uncovered an unused outline for one of those films!*

Here it is, for the first time anywhere…

-A Muppet Western: The Frog, the Bear, and the Ugly-

It was New York City in 1875. Scooter narrates the tale of Kermit the Frog, Fozzie Bear, and Gonzo, three sail boat builders who decide to take their talent West. (Song: “Sailing West”) Gonzo tries to charter a ship to go West, but they decide that a train is far more traditional. (KERMIT: “Here we are in the old West!” FOZZIE: “Yay verily!” KERMIT: “Uh, a little too old, Fozzie.”)

Our next scene finds Miss Piggy performing a nightly show in a little bar out West. (Song: “Bad Little Piggy”) We soon learn that she is actually a gun slinger and stagecoach/train robber… in addition to occasional modeling gigs with Tumbleweed Photography. No one knows the true identity of Bad Little Piggy as the criminal is always masked. No one even recognizes her as a woman, despite her frequent corrections.

Kermit, Fozzie and Gonzo’s train goes right past Slipper Hill, a graveyard atop a hill. (Song: “Slipper Hill”) The song has nothing to do with the movie, but it seemed rather Westerny. Their train is soon held up by Bad Little Piggy and her cohort, Annie Sue. This is where Kermit first lays eyes on Miss Piggy. Though he has no idea who she is, he feels strangely drawn to her. The train continues on to Deadhead, the trios destination (they wanted to go to Deepinaharta, Texas, but Deadhead’s all they could afford).There they try to sell their sail boats, but to no avail. They are complete failures.

After the local sheriff has a nervous breakdown, Kermit is forced into the job. Fozzie becomes his deputy and Gonzo becomes an outlaw (there were no other positions available at the jail).

The newly appointed sheriff and his team head down to the local saloon. The place is run by Pops with Rowlf at the piano. They order a sarsaparilla and learn that Big Bad Fiama is coming to town. (Song: “The Ballad of Big Bad Fiama”) Big Bad Fiama’s looking to see a show, and he intends to “bump people off” until he does. Kermit just so happens to find a poster for Miss Piggy’s show and goes to see her in her dressing room to request her help.

In her dressing room, Kermit has the feeling he’s met Miss Piggy before. She immediately recognizes him from the robbery, but denies their ever meeting. (Song: “Did we…? Are you..?”) Kermit asks her to be in the show that they must put together, and she gladly accepts.

Kermit and the Muppets are busy putting the show together when Big Bad Fiama and his “Chinese” assistant, Sal, arrive at the saloon. Fiama acts tough, but Kermit warns him about pushing the people of Deadhead around. Fiama tries to get tough with Kermit, but Piggy defends her frog. Furious, Fiama has Sal find out all that he can about the Muppets, especially Miss Piggy.

Later that night, Annie Sue learns that Big Bad Fiama is, in fact, loaded (rich, not drunk). Excited, she tells Piggy about her plans to steal Fiama’s fortune. Miss Piggy has a moral dilemma, but ultimately decides to go through with the plan.

Sal returns to Johnny Fiama without any information about the Muppets. This is only a moment before Fiama’s other minions arrive with the captured Annie Sue and Miss Piggy. Fiama now knows the true identity of Bad Little Piggy

Kermit and the gang are rehearsing their show when Johnny returns to the saloon, gloating. He releases Piggy into the room and reveals her identity. (Song: “The Ballad of Big Bag Fiama Reprise”) Piggy tries to explain, but runs away in embarrassment.

Against the Muppets wishes, Kermit, Fozzie and Gonzo are thrown out of town by the townspeople, being blamed for bringing criminals like Piggy and Johnny to the neighborhood. They head out on the open road.

It’s late at night. Kermit, Fozzie and Gonzo are gathered around a campfire in the middle of the dessert. (Song: “Campfire Song”) Miss Piggy, who has been chasing them for quite some time, finally catches up to them. She explains everything to Kermit, telling him how she wants to change her ways. They are soon joined by the rest of the Muppets who have come to tell Kermit that Big Bad Fiama has taken over. Though Kermit is reluctant to return, Fozzie convinces him to go. The Muppets need his help. Kermit and the gang work out an elaborate plan, but end up winning Johnny over with a song and dance number. (Song: “Git Along”) They even manage to sell Johnny a sail boat.

And now you know why you never saw The Muppet Western. 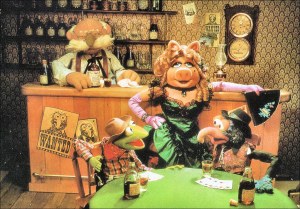 One thought on “A Muppet Mindset Movie Outline: A Muppet Western”