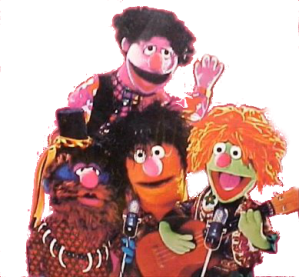 Band members…
The group is led by Little Jerry on vocals, Big Jeffy sings bass for the group, along with Chrissy (not to be confused with the leader of Chrissy and the Alphabeats) and Rockin’ Richard.

WHO ARE LITTLE JERRY AND THE MONOTONES?
Little Jerry and the Monotones are a group of hippies who sing rock and roll tunes, usually in the style of 1950’s do-wop. Many of their early songs are about different emotions, such as “Mad,” “Proud,” and “Sad.”

THE MONOTONES AND THEIR PERFORMERS

Each member of Little Jerry and the Monotones is named after their primary performer, though at times members of the group have different performers/voices (most notably in a season two sketch in which the group assists Grover in spelling the word “walk”, in which Jerry Nelson performed Big Jeffy, Fran Brill performed Little Jerry, and Caroll Spinney performed Chrissy and Rockin’ Richard), sometimes with certain members having different voices and even being referred to by the wrong name (for example, in “Mountain of Love”, the orange member refers to himself as Big Jeffy, when Big Jeffy is actually the fat blue one). Chrissy and Rockin’ Richard don’t get many solo lines in songs and often lip-sync to the wrong voices the most, making it difficult to determine which one is supposed to be Chrissy and which one is supposed to be Richard.

Big Jeffy and Chrissy are only voiced by their performers, who were songwriters for Sesame Street and not puppeteers. In a 2009 ToughPigs interview with Jerry Nelson, he said that the group was Jeff Moss’s creation, stating that Moss just liked doing the bass voice.

LITTLE JERRY AND THE MONOTONES SONGS

Two of their few non-music appearances are sketches with Grover. In one such sketch, they hold up the letters that spell “walk”, and once Grover says what it spells, they walk over Grover. In another, Grover talks about the word “exit”, as they go through the door Grover is standing in front of in the wrong direction, once again walking over Grover.

WHY DOES SESAME STREET NEED LITTLE JERRY AND THE MONOTONES?
Sesame Street has always been musical, so Sesame Street needs characters who specialize in singing. And as I write this I realize that the show hasn’t had any recurring Muppet bands or singing groups in quite a while.  Bring back Little Jerry and the Monotones!

One thought on “Weekly Muppet Wednesdays: Little Jerry & the Monotones”