James Gannon – I’m out of clever introductions this week.  On to Muppet Sherlock Holmes 3, The Red Headed League.

Jabez Wilson (Pepe the King Prawn) is the manager of an unsuccessful Prawn shop… that’s right… Prawn Shop, and had to take a job as a member of the Red Headed League. He asks for Sherlock’s expertise, not so much because he knows they’re up to something, but for the simple fact he doesn’t know what he even does. So, in the grand tradition of last issue, Holmes, Watson, and LeStrade go undercover, working at the Red Headed Leagu’es office. Their boss? Duncan Ross (Uncle Deadly in a red wig), who seems to be buddy buddy with Pepe’s small business assistant, Spaulding (Bean Bunny with NO red hair). Oh, and a slew of cameos by every red headed Muppet imaginable. And not to give too much of the ending away, but Sherlock actually COMEPTENTLY solves the case this time. To be fair, last issue wasn’t so much a mystery as to foil an extortionist. 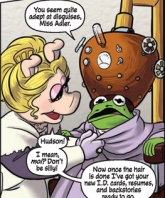 Now, I read some of the other reviews and I can safely say, I guess I’m liking this more than anyone else, but I do see the flaws in the series. I actually felt the first issue was pretty strong–the characters basically sent up every mystery cliché there is, Gonzo even accusing the butler randomly. The last two issues have been infiltration and jokes thereof, with the mystery part playing second fiddle. Sure, I’m liking a few concepts; Piggy’s character of Irene Adler somehow becomes Miss Hudson (Sherlock’s landlady/housekeeper… i.e. the woman in “this could use a woman’s touch”), all the while not doing ANY housework and helping the boys with their disguises. Gonzo’s ride through mail tubes in the mail room was a nice touch, as was the fact he was completely out of place in a routine work environment (though I think it should have gone deeper, as Sherlock’s character is that eccentric that normality would fry his mind, like Gonzo’s was).

What it comes down to is plot. When they have a story, it works. But I really think the endless gags and puns should have been cooled off a bit (they ran rampant in last issue, which seemed to have no plot at all). Muppet King Arthur had a similar format, but it worked much better there. There isn’t a true balance between shortening the story loosely and running away with it, and that might be due to the format of a new (often disconnected) story every issue. Seems like if this was a longer run (like, 8 issues or something) and every two issues was a single story, establishing something at the end of the series, it would be much stronger. It’s almost as if there’s a lost opportunity for adventure that takes a back seat to wackiness and non-stop jokery.

All the while, I’m liking Gonzo’s Sherlock, Fozzie’s Watson is okay (though, almost like his Muppet Babies personality), and Piggy has been pretty good the last two issues. The problem is with Kermit’s LeStrade. He comes off as a a third wheel, and not quite the stuffed shirt in the books. While he was refreshingly reluctant in the first issue, he seems all too much like the third Amigo instead of the “I don’t know how you did it, but you did it” type. Doesn’t even question them this issue. Sam Eagle really would have made a more apropos LeStrade, but I guess they needed Kermit somewhere in the story. Plus, I wanna see Moriarty.  They should have at least had him scheming, building up to something great in the finale through the series.

But still, much, MUCH more readable than Muppet Robin Hood–just not as strong as Muppet Snow White or Muppet King Arthur. And Amy Mebberson’s Pepe has dramatically improved this issue. She really hit that stride over the more childlike, almost Muppet Babies version of him in Muppet Peter Pan. That said, I found something interesting at a comic store yesterday, and I might just talk about it when we don’t have a review that Monday.