Greetings, Muppet fans! Guess who’s back–again! Yes, your favorite Ryan Dosier, Ryan Dosier, has returned from his much-needed vacation in Walt Disney World. How was Lisa the Intern? Did you all behave for her? I certainly hope so… she’s the only good babysitter around. Unless you want me to call that British nanny again? …That’s what I thought.

Not much happening in today’s post because I’m still tired and I have to unpack and such… but you can expect a full update on all the (few) Muppet things that were happening at Walt Disney World in the five days I was there. A preview: Not much was there, but I and a few Cast Members I spoke to were quite hopeful for what was coming with the wave from the upcoming movie.

Anyway… what is happening in this post is me reminding you to go vote in the first round of The Muppet Madness Tournament, which ends at midnight tomorrow, March 20th. There are some CRAZY close races currently–especially Alistair Cookie vs. Dr. Bob, which is currently only separated by two votes. So get over to http://muppetfans.com/tournament a vote, darn it! It’s some of the most fun in the Muppet fan world all year and The Muppet Mindset is beyond thrilled to be a part of it this year. Who am I voting for? Well… I won’t type it out but… And, to end our post, we have to show off this fantastically amazing piece of work the incredibly talented Susanne Ritchie, who is behind the Black Cat Balloon Company blog, created. Check out this AMAZING balloon representation of everyone’s favorite gargling gargoyle and bonafide Muppet Mindset mascot, Angus McGonagle: 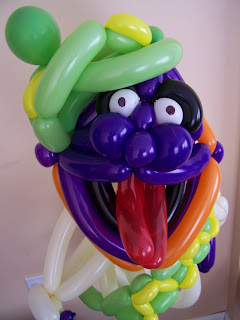 How crazy awesome is that? I MUST have one. Someone call someone about that, okay? Be sure to check out the rest of the blog for even more amazing Muppet balloon representations and we’ll see you all later here on The Muppet Mindset!