Greetings, Muppet fans! Here we are again, already time for Round 3 of The Muppet Madness Tournament 2011–or, the Regional, if you like sports or glee club competitions. The match-ups between Muppets is getting more and more intense! We now have two classic Frank Oz character variants pitted against each other… and we have Statler and Waldorf facing off against Scooter. How will it all go?! Well… once again, here are our predictions: 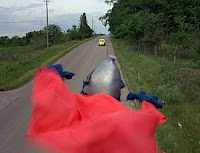 Alistair Cookie vs. Super Grover
Arguably the two most popular characters in this year’s lineup, Alistair Cookie and Super Grover have been racking up record vote numbers since Round 1. It will be extremely interesting to see if their rampant fans continue coming out in full force to support them in the Regional. But who will win? Well, I’ve been calling for a Super Grover victory of the whole tournament, so my money is on the super monster who is furry, lovable, and cute, too. I suppose this race could go either way… but I find it hard to believe that the uber fan-favorite Super Grover could be beaten by Cookie Monster’s Monsterpiece Theater character. Although, like I said last time, I’ve been wrong before!

Mr. Snuffleupagus vs. Mahna Mahna
Another hotly debated race. Snuffy and Mahna Mahna have been engaged in some of the most vocal and passionate competitions of this whole tournament. Snuffy’s pull out over Cantus last round and Mahna Mahna’s victory over the Doozers have solidified them both as heavy fan favorites. However, like always, Snuffy is heavier. I have to call a victory for Snuffy in this round. Yes, finally ready to prove he is so not imaginary by making it to the Final Four, Mr. Snuffleupagus will trounce Mahna Mahna. I’m sorry, Mahna Mahna fans… I just really don’t think he can do doo do doo it.

Rizzo the Rat vs. The Penguins
Some of these matchups… it’s like picking favorite children! (Obviously the one that runs a Muppet blog is always the favorite.) While Rizzo is one of my very favorites… the Penguins define Muppet randomness and zaniness! How will we choose?! I don’t know about you… but I’ll probably go back and forth voting for both. I suspect that most casual fans will vote for Rizzo, simply because of his history and characterization. The Penguins may be fantastic but they simply don’t have the character or wit and charm of Rizzo. Sure, they’re great for tossing around… but they can’t bat the rat and that is that. 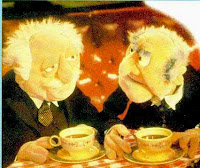 Statler and Waldorf vs. Scooter
Ladies and gentleman, the only matchup in the Regional that is completely one-sided! Unfortunately, Scooter just cannot stand up the might of Statler and Waldorf (“might” used here to mean overwhelming age). The two old geezers have the highest likelihood of going to the final round int he whole tournament. Poor Scooter just can’t take that heat… No matter how much they may hate it (even though they probably secretly love it), I’m calling yet another all out victory for Statler and Waldorf.

And there you have it, Muppet fans! I guess we’ll just have to see how it all plays out. Now… go vote! In this round only you’ll be able to vote every 8 hours instead of 12. So what are you waiting for?! Hop on over to http://muppetfans.com/tournament and make your vote count!

One thought on “The Muppet Madness Tournament 2011: Round 3”