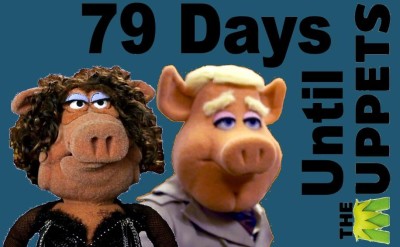 Lucas Ervin – If there’s one species that seems to have the most occupancy on The Muppet Show–both  backstage and onstage–it’s the pigs. They even seem to take up quite a few of the opening numbers over the years. There’s Miss Piggy of course, along with Link Hogthrob, Annie Sue, Dr. Strangepork, Lydia the Tattooed Lady, and even that giant weird pig that danced with Rudolph Nureyev. So I figured this week let’s enjoy some of their best numbers.

79.   Lullaby of Broadway – When Gilda Radner came on to host the show, Kermit decided to open up with what he called, “A traditional lullaby from beyond the Antarctic circle… or somewhere.” The pigs do a great job in singing the famous song from the musical 42nd Street. They’re also joined by a walrus, chicken and even the first Muppet penguin, which was built and performed by Brian Henson, Jim’s son. It’s definitely one of the musical numbers from the Show that’s been highlighted the most throughout the years, even with the broken ig.

78.   Staying Alive – For a song that’s originally sung by the Bee Gees, the pigs on the show certainly found a way to make this 70’s hit song their own during this opening number of the Helen Reddy episode. Led by Miss Piggy, the song takes place in the Palace of Versailles, where she and the pigs make the song about how they are still standing, and nothing will stand in their way… that is, until they notice the giant guillotine at the end of the number…

77.   Yakety Yak – Here’s a fun song that was done at the top of the Tony Randall episode. This song was originally sung by The Coasters, with Jerry Nelson and Louise Gold doing another fantastic song together as lead vocals. Here we have a pair of prehistoric pig parents telling their kids to clean the place up before going out. Also, I love the cherry on top of this song, which is Zoot in a snazzy leopard outfit, playing a sax that’s made out of dinosaur bone.

76.   The Pig Calypso – “Bib and napkin, knife and fork is the only way that I’ll touch pork.” Enough said.

75.   Hawaiian War Chant – Keeping with a tropical theme, when Sylvester Stallone came on to host the show, they opened with a number that expresses the sounds and language of Hawaii, singing alongside some parrots and penguins as well. Also, Animal plays a mean set of drums in this number, while the gorilla tries taking some of the singers out with coconuts. This song is actually found on The Muppet Show‘s second album and is still one of the more notable opening numbers to this day.

74.   I Get Around – Another pig number led by Miss Piggy, a Beach Boys classic was once again turned up on its head and the Muppets found a way to make this their own. I like how everyone else has skulls and crossbones on their bike, except Miss Piggy, who has a picture of Kermit on hers. In the documentary Of Muppets & Men, you can actually see the behind the scenes of this number, with the performers underneath their characters moving back and forth to make it all look realistic. This is probably the only time people ever enjoyed road hogs.

73.   In The Navy – When Roger Moore came on to host, it would be the last episode of The Muppet Show ever filmed. How fitting is it, then, that the final opening number belongs to the pigs, where they emulate what the Scandinavian recruitment process must have been like. This can also be seen on Of Muppets & Men, where all the people working on this number take all day just to complete this one number, and they only spend three days shooting an entire episode of The Muppet Show. Hey, it was well worth it.