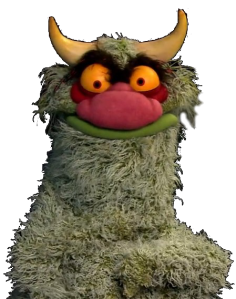 Most recent appearance…
Muppets Most Wanted (2014)

WHO IS BIG MEAN CARL?
Big Mean Carl is a huge, ravenous monster who specializes in eating other smaller creatures and partaking in numerous vocations.

Carl first appeared in 1992, performed by Dave Goelz and called Chairman Budget. It wasn’t until 1996 and Muppets Tonight, when Bill Barretta took on the massive monster, that Carl became Big and Mean. He first stormed on the scene as Carl the Big Mean Bagpipe-Eater, wherein he… ate bagpipes. Throughout the run of the show, Carl would appear as various “Big Mean” incarnations that usually involved him violently consuming or smashing something.

He also starred in the Muppets Tonight game show “Swift Wits,” hosted by Snookie Bleyer, where guests would attempt to answer a question correctly, and every incorrect answer resulted in the eating of a cute animal by none other than Carl the Big Mean Bunny. Only once did a contestant answer correctly… but, of course, Carl ate the animal anyway.

After Muppets Tonight ended, Big Mean Carl disappeared until 2008 when he acted as the boss in the control room on the Today show when the Muppets overtook the show. Later in 2008, Carl returned to a full-fledged Muppet production working in the mail room during A Muppets Christmas: Letters to Santa.

In 2009, Big Mean Carl struck it big with a role in “Bohemian Rhapsody,” where he played “the monstrosity” that eats Rizzo and the rats. This was Carl’s most important dialogue since Muppets Tonight and he uttered it well–even when his mouth was full.

April 2010 was the biggest month in Carl’s distinguished career. He starred in his own viral video, “Stand By Me,” singing the titular song and eating bunnies as he went. Carl’s video swept the internet, and everywhere people were asking the burning question: “Who the heck is Big Mean Carl?” Later in 2010, Carl appeared alongside Pepe the King Prawn in LOST Slapdown where he auditioned for the part of the Smoke Monster for the producers. 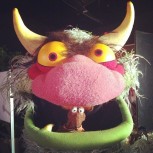 WHY DO THE MUPPETS NEED BIG MEAN CARL?

In their heyday, the Muppets were all about what Frank Oz referred to as “gentle anarchy,” meaning that every time one of them started to get sweet or sentimental, there was another one that showed up to eat them or blow them up. Big Mean Carl carries on this magnificent tradition. He is pure silliness–let’s face it, his main purpose is to eat things and shout “Thank you!!” after he has done so. Now that’s comedy. Big Mean Carl is as Muppety as they come, and his resurgence in recent years is as welcome as it was beautifully random.