Ryan Dosier – About three months ago, I made a promise to Steve Whitmire. I promised him that, once I saw The Muppets, I would write an honest review of my thought on the new film. Well, I just got home from the early Cast and Crew screening of The Muppets in the main theater of The Walt Disney Studios and I’m ready to showcase my honest opinion. And here it is:

The Muppets is everything I wanted and expected it to be. Somehow, Disney and Jason Segel and James Bobin and the Muppeteers and the entire production team, have done the impossible: they’ve made a movie that appeals to virtually everyone–Muppet fans, huge Muppet fans, casual fans, adults, kids, teenagers… everyone. But the more impressive and incredible feat is that they’ve made a truly funny, truly emotional, truly fun Muppet movie. Five years ago, I don’t know anyone who would have thought this could be done, but I am here to tell you honestly that it has been done… and it’s coming to theaters very soon.

The Muppets are the stars of this film, 100%. I was actually extremely surprised by how great both Jason Segel and Amy Adams are and how brilliantly they eased into the story. The most surprising part was that, once Kermit was back in the picture, we barely hear from either Gary or Mary until the third act and all focus shifts to Kermit and Fozzie and Rowlf and Scooter and Gonzo and Walter and Lew Zealand and Animal and Floyd… and the divine Miss Piggy. If there is any doubt in your mind about whether the Muppets are the stars of this film, squash it immediately. I am here to tell you that no one shines more than Kermit, no one has more laughs than Fozzie, no one carries more weight (don’t hit me) and emotion than Miss Piggy, and no one will give you shivers like Walter. This is a Muppet movie with Jason Segel in it, not a Jason Segel movie with Muppets in it.

That’s not to say, however, that the human co-stars aren’t fantastic–because they really, really are. Jason Segel’s character, Gary, was one of my favorites. The song “Man or Muppet,” a brilliant duet between Gary and Walter, that comes before the big Muppet telethon was one of the true, honest highlights of the film. The song was incredibly catchy and warmed my heart to no end, and mostly because the great acting of Jason Segel and Peter Linz as Walter. One of the most touching scenes in the movie comes just before the big climax when Gary and Walter are talking backstage. It will endear Jason Segel in your heart forever (as if that hasn’t already happened). 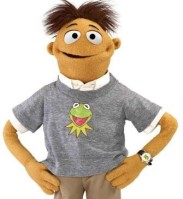 If you have any doubts about Walter… stop having them. Watler is pitch perfect in absolutely every scene. His story and his journey is incredible. Why is Walter such a big Muppet fan? Because he’s different, and watching the Muppets made him feel accepted and showed him that everyone is special and deserves to show it. The way he talks to Kermit or Gonzo is the way you or I would talk to Kermit or Gonzo… a dedicated fan who would do anything–yes, even being thrown into an electric fence–to bring his heroes back together. There’s a moment, at Kermit’s house, when Kermit is down and lost, and the things Walter says to the Frog will make you honestly wonder if they broke into your brain to write the dialogue. Peter Linz has brought to life an amazing, enduring, and wonderful character. People–myself included–were swarming him after the screening to congratulate him on a truly perfect new character.

Speaking of the Frog, I know this is going out on a huge limb, but Kermit in The Muppets ranks alongside Kermit in The Muppet Movie for his incredible acting, depth of emotion, and heroic journey from beginning to end. The Kermit we meet at the mansion has lost his way without his friends. If his song, “Pictures in My Head,” does not move you in some fashion, then you’re not giving credit to the history of Kermit the Frog and the amazing talents of Steve Whitmire. “Pictures in My Head” will surely go down in history as one of the great Kermit songs. It carries the weight of his entire plight in about two minutes, and it’s perfect.

And I am thrilled to say that the biggest emotional storyline is carried out by Miss Piggy and Kermit. Their falling out and rising back up is amazing. I’ve honestly never loved and believed in the frog and the pig more–and that all has to do with the way the characters were respectfully handled and written. They reference their history, they confront each other about past issues, and they finally come together and share the sweetest moment you could imagine. However, Piggy fans will be pleased to know that it’s not all sweetness and kissy kissy, Miss Piggy shows variety brilliance throughout. One of my favorite scenes comes when Piggy executes her idea to get a celebrity guest host for the telethon. You’ll be in stitches.

Chris Cooper’s Tex Richman is one of the most evil of Muppet villains, ranking up with Doc Hopper in his cruelty and attempts to destroy the Muppets. But he would not have been nearly as fun if not for his great sidekicks, Uncle Deadly and Bobo. Bobo is a laugh riot, as always, and really is just there to make goofy comments for no real reason, which is perfect for the bear. Uncle Deadly takes the cake, however, and Matt Vogel should be commended for bringing back a character whose potential is undeniable. Just wait until you see Uncle Deadly’s big scene… I doubt you ever thought you would be moved by Uncle Deadly, but you will.

One of my favorite things about this movie was the soaring, hilarious, and wonderful music. Almost every song is not only catchy, but also takes you on an emotional, heartwarming, and hysterical ride. Even the rendition of “Rainbow Connection” performed by Fozzie Bear and the Moopets, which is just meant to crack you up, carries the emotional wait of seeing poor Fozzie trying to perform but stuck with an act that he doesn’t believe in. Every song has this sort of wonderful subtext. The undoubted musical highlights are both the opening and closing “Life’s a Happy Song” (Oscar worthy, seriously), Kermit’s “Pictures in My Head,” Gary and Walter’s “Man or Muppet,” and the unbelievably touching group version of “Rainbow Connection.” The only song I didn’t love (in fact, the only moment in the movie that left me feeling sort of “meh”) was Amy Adams and Miss Piggy’s “Me Party.” The set up was just a little strange and it didn’t really work for me, but every other song in this film will make you smile, laugh, and, maybe, tear up.

There’s just so much that happens in the movie and I’m forgetting to talk about quite a lot. The “getting the gang back together” montage is wonderful and closes with an inside joke that will make you fall out of your seat. There is a wonderfully funny running gag with Gonzo during the telethon. This is probably Scooter’s biggest role in a Muppet movie. Rowlf is charming and funny and delightful. The Electric Mayhem rocks hard. Marvin Suggs sings a line in a song. Link Hogthrob is a featured member of a quartet. Every single cameo is handled perfectly (and some were even trailer-exclusives). Rashida Jones is so much fun. The voices of Jim Henson, Jerry Nelson, Richard Hunt, and Frank Oz all appear in the film (including a very, very special piece from Jerry). There are direct references to The Muppet Movie, The Muppets Take Manhattan, and The Muppet Show, with allusions to The Great Muppet Caper. Wayne and Wanda have one of the biggest laughs in the movie. Remember that all of this is happening in a feature film in 2011.

But, above all, The Muppets reminds us that there is always a place for singing, and dancing, and making people happy; we remember that laughter is the greatest gift you can give someone (no, not children or ice cream) and that it doesn’t have to be cruel or vulgar to make people happy. I truly believe that this is something the world is waiting for and more than ready to have back in their lives… they are ready for the Muppets. Luckily, the Muppets are ready for them with a film that breathes amazing life into the characters, the franchise, and the world of movies.

“Life’s a Happy Song” sums up The Muppets in the best way: “Everything is perfect, it’s falling into place, I can’t seem to wipe this smile off my face!” And it’s true… in so many, many ways. The Muppets have fallen into their place and on November 23rd and the days after, the support of the audience needs to prove it to see more and more Muppet projects. Go see this movie, Muppet fans. From one hardcore fan to however many of you are out there… Go see this movie. There is guaranteed to be at least one thing to make you grin from ear to ear, tap your toes, and give you shivers.

24 thoughts on “THE MUPPETS Movie Review”