There is SO MUCH Muppet stuff happening, people!! They are literally everywhere. Professional reviews of the movie from huge sources (some of which you can read from the links on our homepage) are pouring in like crazy, Kermit, Miss Piggy, and everyone in between are popping up on talk shows all the time, articles are flooding the internet… it really is Muppet Domination, and I really can’t keep up anymore (I mean, I can, it’s just exhausting).

As you all know, The Muppets opens in US theaters in TWO DAYS. I was wracking my brain to figure out what to post today… another News Update, a bunch of video clips, nothing… but you can get all of that anywhere you go. Today, I wanted to showcase what makes The Muppet Mindset special: Muppet fan contributions. That’s why today we’re presenting another review of The Muppets from friend of the blog Elizabeth Leary, who happens to work at The Center for Puppetry Arts in Atlanta (which is amazing). So enjoy the review, brace yourself for even more Muppets, and try not to explode before Wednesday!

Thoughts on The Muppets

Elizabeth Leary – On Monday, November 14th I had the incredibly good fortune of getting to see a preview screening of The Muppets. I’d hoped to see it for the first time at a midnight screening (how awesome would that be?), but I haven’t heard of one in my area, and even if I had, how could I turn down the opportunity to see it early?! I just wish everyone reading this could have joined me.

Before I continue on, some background on me: Lifelong Muppet fan. Became a bigger fan around the age of 13. Went to Vassar College–its campus was used in the opening sequence of The Muppets Take Manhattan (did NOT know this before I was committed to go–spooky!). Interned at The Jim Henson Company my junior year. Interned at The Jim Henson Legacy my senior year. Majored in Film and wrote my senior thesis on Labyrinth. Currently the Grants Manager and Film Series Coordinator at the Center for Puppetry Arts in Atlanta, Georgia.

So, yeah, I’m a VERY BIG fan of Jim Henson and the Muppets and definitely among the great community of people who’ve been anxiously awaiting this film since we first heard about it four years ago. Most of us started out thinking “I’ll believe it when I see it,” which slowly gave way to a cautiously optimistic attitude, which more recently turned into a very optimistic outlook on the film. So with all that anticipation, it would certainly be possible for the actual movie to not live up to all of our expectations. But, as The Muppet Mindset’s Ryan Dosier reported in his own review of the film, it does live up to just about everything I could have hoped for! The movie was funny, heartfelt, and incredibly enjoyable. An excellent film for a Muppet fan, as well as an excellent film for any movie-goer. I’d like to share just some of my spoiler-free thoughts with you.

First, it wasn’t until it started that I remembered how months ago we heard there would be a Toy Story short film before The Muppets. Not sure if Ryan got to see it, but it was screened for us, and as one would expect from Pixar, it was very funny! While on the subject of that company, we also heard a while back that Pixar was recruited to take part in a table read of the script. I’d love to hear how that went, if they gave advice or just gave it the thumbs up, because whatever happened in that meeting it turned out well in the end.

As alluded to above, I saw the film with a somewhat strange audience. First, and this was extremely painful to see, the theater wasn’t full. Also, most people there were college-age. Thankfully, the audience did respond well to the film, which was great to hear. However, there was at least one weird moment of laughter at what was actually a very touching scene. I think a bit of the laughter was understandable, but as the scene continued and the laughter didn’t stop it was annoying. But as Jason Segel himself had to address while writing the script, some people don’t think about the Muppets being serious or sad. Unfortunately, those people viewed the scene as a joke. I don’t think all audiences will react that way, but this mostly younger audience did.

In the opening scenes one thing that jumped out at me, which I know was also noted in some other online article, was the amount of Muppet memorabilia in Gary and Walter’s room. I can’t wait for the DVD to be able to pause it, look at all the items, and play: “What Muppet merchandise do YOU own?” I was most excited to notice two lunchboxes that are among my small-ish but growing collection. Cool to see them on the big screen!

One thing Ryan mentioned in his review was that he didn’t enjoy the Amy Adams and Miss Piggy song “Me Party.” Fair enough, but I did! I won’t give too many details away, but I think all of the songs play to different genres, which is of course very Muppet-y, so I think “Me Party” would be their 80’s girl-power song. I’d have to listen to the music more to confirm this hypothesis, but I think it fits most of the songs.

Was the film 100%, completely perfect? No. But any issues I have are pretty small. (A few scenes seemed to be edited a bit short. Some main characters didn’t get much screen time, but that did allow for a lot of appearances from minor characters–and, as Ryan said, the Muppets are definitely the stars of the film, so it’s not like the film didn’t give them enough time overall. A couple of the younger cameos might not make much sense in a few years. I noticed what appeared to be CGI on a few puppets in “stunt scenes,” which I didn’t like and was distracting.) No matter what nit-picky things I can list, though, I continue to be extremely pleased with how close the film does get to perfection.

Was the movie exactly like the original films? No. It’s not a film that feels like it’s from the 70’s or 80’s, it’s a film from 2011. It does have a certain timeless quality, but it’s not trying to be something it never could by copying decades-old classic films that can never be recreated. It feels like the Muppets have been updated, but in a good way. Whereas past efforts to modernize the Muppets have often put them in situations that resulted in less than stellar productions (Studio DC, anyone?), Jason Segel and Nicholas Stoller were somehow able to make a film that isn’t stuck in the past yet retains the essence of what the Muppets are. Well done, sirs! This clearly wasn’t an easy task, or else some previous projects would have turned out very differently. But thankfully this time around we’ve been given an absolutely delightful film that will be adored by fans, enjoyed by the general public, and which will stand the test of time.

I would probably have seen this film in the theater a few more times no matter what. Opening day, with a larger group of friends that weekend, maybe a few weeks into the run before it leaves theaters. Even if I didn’t like it, I probably would have suffered through it multiple times. Therefore it makes me incredibly happy to know that I will ENJOY seeing it more times! In fact, there are so many things happening in the background throughout the film that I’m sure every viewing will reveal something different, which means multiple trips to the theater are practically required for Muppet fans. I also like that I can honestly encourage anyone and everyone to see it because one’s enjoyment of the film is not dependent on their level of Muppet fandom.

Final thoughts: Wonderful film! As I said before, Jason Segel and Nicholas Stoller wrote a fabulous script that they should be proud of. James Bobin, the Muppeteers, and everyone else who worked on the film should be proud of it. It honors the past, treats the characters with respect, and gives the audience a great piece of entertainment for the whole family. I can’t wait for everyone to get to see this film so we can all fully enjoy what a fabulous time it is to be a Muppet fan! 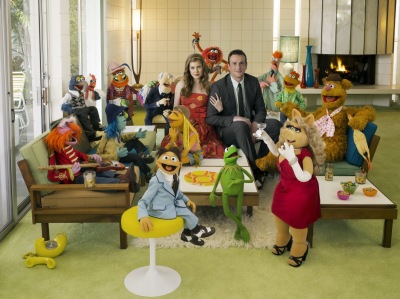 One thought on “Another Review of THE MUPPETS”