Early this morning, deep in the hills of Hollywood, nominations for the 84th Annual Academy Awards were announced. Muppet fans everywhere awaited the news of any nominations at all for The Muppets. Well, we didn’t have to wait long to find out that The Muppets was nominated for Best Original Song with the touching, powerful, hilarious, magnificent “Man or Muppet” written by Bret McKenzie and performed by Jason Segel, Walter (Peter Linz), Muppet Jason Segel (Bill Barretta), and Jim Parsons!!

This is huge news, not only because it was nominated, but because “Man or Muppet” has a 50% chance of winning the Oscar, thanks to there only being two songs nominated in the Best Original Song category this year. The other song nominated is “Real in Rio” from the animated film Rio. We may be living in the year when, for the first time, a Muppet movie takes home an Oscar.

I’m sure most of you are wondering why only one song from the film was nominated, well, I was too. It turns out, in 2008, after Disney’s Enchanted was nominated for three songs and ended up not winning for any of them, the Academy Awards announced that a limit would be placed on the number of songs that can be nominated per movie, so that votes aren’t split between them.

The 84th Annual Academy Awards air on ABC on Sunday, February 26. It hasn’t been announced yet if the song will be performed live, but with only two nominees it seems silly not to. I would be shocked if Jason and Walter, at least, weren’t there to perform, and I honestly expect a lot more! We’ll see!

It’s a great day to be a Muppet fan, a Muppet of a man, or a very manly Muppet!! Congratulations all around! 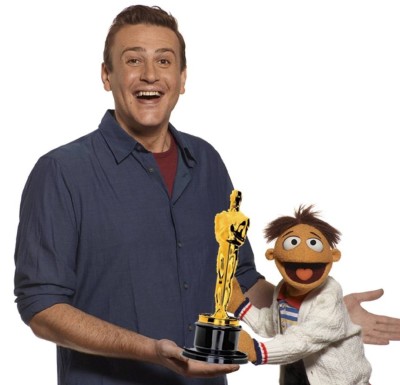 4 thoughts on “"Man or Muppet" Nominated for an Academy Award!”