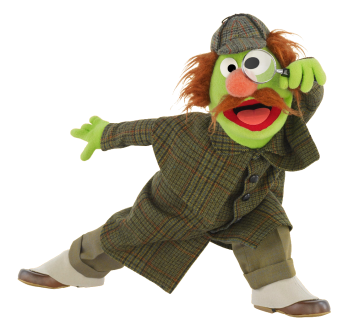 WHO IS SHERLOCK HEMLOCK?

Sherlock Hemlock is a hapless detective on Sesame Street and a clear (bumbling) parody of Sherlock Holmes. He speaks in a British accent and enters scenes with “detective music.” He often carries a magnifying glass and wears a traditional Holmes-like outfit including a deerstalker cap and an Inverness cape (whatever those are). He often shouts “Egad!” whenever he finds a clue.

In later seasons, along with solving mysteries with Ernie, Sherlock Hemlock appeared in the recurring cavemen sketches as the “Royal Smart Person.” In the cavemen days, Sherlock Hemlock helped out Caveman Ernie by inventing the EXIT sign, paper, toothbrush, and juice.

Sherlock Hemlock also appeared in two notable sketches about the letter X during his run on Sesame Street. He appeared on Guy Smiley’s game show “Mystery Guest” alongside Cookie Monster and Don Music, where the Letter X was the mystery guest. (Sherlock Hemlock guessed the Letter I was the mystery guest.) He also performed one of his only musical numbers on the show, “X Marks the Spot!” which acted as a warning/informative song about what the letter X may represent.

The most recent major appearance by Sherlock Hemlock occurred in Season 27, where he once again worked with the Letter X as the notorious letter wanted to quit the alphabet. Sherlock Hemlock did, however, appear in Season 40 in one of the “Hidden Gems” with a small speaking role demanding service at Hooper’s Store.

While Sherlock Hemlock has not appeared in a major capacity on Sesame Street in sometime, I think that it is high time he returned. Not only is he quite hilarious in his bumbling mystery “solving,” but in today’s modern adaptations of Sherlock Holmes (Robert Downey Jr.’s Sherlock Holmes film series and PBS’s Sherlock), the topic is once again ripe for parody.

The Sesame Street writers are fond of having Elmo and Abby Cadabby and other characters solve mysteries in the street stories, so why not have Sherlock Hemlock join in the fun? And with his performance as Uncle Deadly in The Muppets, Matt Vogel has proven that he can mimic Jerry Nelson’s British accent with aplomb. Bring back Sherlock Hemlock! 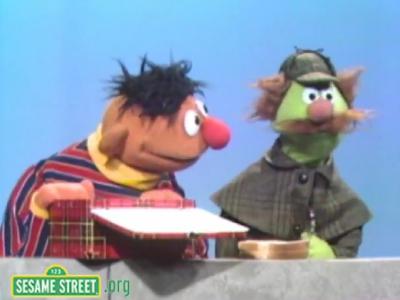