Most recent appearance…
Muppets Most Wanted (2014)

Famous quote…
“This is a Muppet News Flash!”

WHO IS THE NEWSMAN?

The Newsman is the hard working, often-injured, most likely incorrect reporter of wacky news stories on The Muppet Show. The formula for the Newsman’s reports were fairly simple: Newsman reports something ridiculous, and said ridiculous thing falls on him or otherwise ruins the news report. For example, the Newsman reports that it is the first day of fishing season, a gunshot is heard, and fish fall onto his desk. More than a few times, the reports made by the Newsman lead to something falling on top of him, rather than just on top of his desk. The objects that have landed on the Newsman have ranged from a cow, the statue of Venus, a weight, a bowling ball, a boulder, and the S.S. Swinetrek. 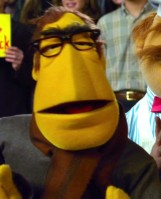 The Newsman has appeared in four of the seven Muppet feature films, starting with The Muppet Movie where he appeared in the big crowd finale scene. In The Great Muppet Caper he reported on the “breaking news” of Kermit’s date with Lady Holiday (details at 11). He sang a line in the song “Somebody’s Getting Married” in The Muppets Take Manhattan, and also appeared in A Muppet Family Christmas, The Jim Henson Hour, and made silent cameos in Muppets Tonight.

n The Muppets (2011), the Newsman was seen answering telephones for the Muppet Telethon. In one scene he was seated next to Selena Gomez, reporting that his phone was dead; “Repeat: My phone is dead.” In Muppets Most Wanted, the Newsman reported on Constantine’s explosive breakout from prison and dropped the first hint of the mysterious Lemur.

While feature films and other appearances mainly featured the Newsman when Jim Henson was performing him, he has also appeared a number of times after other performers took over. In 2001, the Newsman made his first post-Henson speaking appearance at The Muppet Show Live at the MuppetFest fan convention, where he was pelted with ping-pong balls, footballs, and a boulder. Two years later, his voice appeared in the video game Muppets Party Cruise during a mini-game. In both instances, the Newsman was performed by Brian Henson. Starting in 2008, Steve Whitmire took over the role of the Newsman, first in a video on Muppets.com. In 2009, he appeared briefly in the award-winning “Bohemian Rhapsody” viral video, The Muppets Kitchen with Cat Cora in 2010, and “The Muppet Show Theme Song” music video with OK Go in 2011.

The Newsman also made multiple appearances in The Muppet Show Comic Book and Muppet Robin Hood. An action figure of the Newsman was released by Palisades Toys as part of Series 5 of their Muppets action figure line. It is still his role on The Muppet Show, getting knocked on the head by countless objects while trying to report wacky news, that he is best known for.

WHY DO THE MUPPETS NEED THE NEWSMAN?
The Newsman is one of the more one-note Muppet characters, with no real definitive personality (other than his utter frustration with the news he has to report), but he is still hilarious. The Muppet News Flash segments are some of the most popular on The Muppet Show, and always generate a laugh. You can’t beat a good physical comedy bit like dropping a cow on a newscaster.

One thought on “Weekly Muppet Wednesdays: The Newsman”