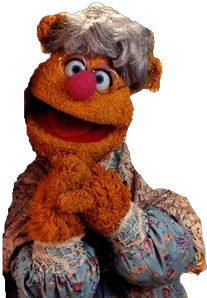 WHO IS MA BEAR?

Emily “Ma” Bear is the mother of Fozzie Bear. She lives in a farmhouse in the countryside of Grizzly Farm and loves her son and the sun. First appearing in Season Two of The Muppet Show, Ma Bear was seen waiting for Fozzie’s act to begin… only to fall sound asleep in between jokes, much to Fozzie’s dismay. Her only other appearance on The Muppet Show was in the UK Spot for Episode 410, where she and Fozzie sang “Knees Up Mother Brown.”

Her most major role in a Muppet production came in 1987 in the television special A Muppet Family Christmas. In the special, Ma Bear is all set to fly off to the beach for the holiday while renting her house to Doc and Sprocket. She is soon surprised by a visit from Fozzie and all of his friends, come to stay at Grizzly Farm for Christmas. Ma Bear is left to deal with Kermit “the lizard,” cookie-eating monsters, and a whole host of other weirdos. But, through it all, she gets to spend Christmas with her beloved Fozzie–as well as her old friends Statler and Waldorf, whom she invites for the holiday as well.

Ma Bear’s final onscreen appearance, and first big screen appearance, was in 1992 in The Muppet Christmas Carol as Fozziwig’s mom, Mrs. Fozziwig, who is quite eager to get the party started (which she does). Ma Bear is mentioned, but not seen, in a few more instances, including a bonus feature on the DVD for A Muppets Christmas: Letters to Santa, where Fozzie reveals that she knitted the hideous Christmas sweaters that he and a few others are wearing.

Most recently, Ma Bear appeared in illustrated form in the fourth issue of The Muppet Show Comic Book: Family Reunion (2010). In the comic, Ma comes to visit Fozzie at work and Fozzie pulls out all the stops to try to impress her. He impersonates Sherlock Holmes and attempts a whole host of other things–only to realize that Ma Bear loves him just the way he is.

WHY DO THE MUPPETS NEED MA BEAR?

Ma Bear is a wonderful addition to the Muppets, and one who would fit in perfectly with today’s world. Fozzie is as insecure and wonderful as ever, and he was often even more enjoyable when he was with his doting, hilarious mother. Their interactions in The Muppets at Walt Disney World are wonderful and I would love to see Ma Bear return to pester Fozzie and watch Fozzie work even harder to impress. She also has a hilarious, uninformed relationship with the other Muppets. Imagine how she and Miss Piggy would get along. Comedy waiting to happen!