Hilarie Mukavitz – A lot of the artists featured in this series have been lesser known. You might have heard of their work, but odds are you hadn’t heard of them. I’m guessing unless you’re reading this blog from Planet Koozebane, you’ve heard of the Beatles. What you may not know is while the Muppets did many covers and parodies of Beatles songs, the Beatles themselves, one in particular, were also fans of the Muppets.

On July 6, 1957 a 15 year old named Paul McCartney went to a church picnic. Local band “The Quarrymen” was playing the song “Come and Go With Me.” What caught Paul’s attention was the lead singer didn’t know the actual lyrics to the song, so he was substituting words from old blues tunes. “Come on baby come and go with me, down down to the penitentiary.” Afterwards Paul introduced himself to the singer, 16 year old John Lennon. Paul played “Twenty Flight Rock” and John was impressed that Paul got all of the difficult lyrics right. The miracle of that day is 16 year old John Lennon had enough ambition and self-confidence to get past his own ego, and invite McCartney, a considerably stronger musician, into the band. Paul would bring his younger friend from school, George Harrison, into the band. And in 1962 they brought in Ringo Starr on the drums.

If you want to hear the rest of THAT story I’d recommend renting “The Beatles Anthology.” Fast forward to 1969. In September 1969 John Lennon announced that he wanted out of the band. Although the breakup would not be official until seven months later.

John and Yoko Ono went to the United States, and John became obsessed with the brand new show Sesame Street. Sesame Street, particularly in its first season, would feature a lot of Beatles songs including: “Lucy in the Sky With Diamonds,” “All Together Now,” “Yellow Submarine,” “Octupus’ Garden,” and “Help!” John’s favorite part of the show was Cookie Monster. In his 1970 album, “Plastic Ono Band,” on the song “Hold On” at one point you can hear him shout “COOKIE!” Ringo, who was the drummer for that song, later shouts “Cookie” himself on his song “Early 1970” about his relationships with the other ex-Beatles. Later, when John was interviewed by a man named Bert, he launched into a Bert and Ernie impression. 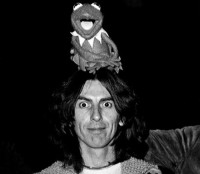 During the Muppets’ year long stint on Saturday Night Live, the characters from the Land of Gorch sang parts of Beatles songs as part of the ongoing joke that Lorne Michaels was trying to book the Beatles on the show. The famous picture of George Harrison with a Kermit doll on his head is claimed to be taken from when he was on the Saturday Night Live set.

The Muppet Show had a plethora of Beatles covers: “Octopus’ Garden” (a popular song with the Muppets, as they also did it on Sesame Street and The Ed Sullivan Show) featuring Robin, Kermit (in a bathing cap), Animal, and a Miss Piggy Mermaid, “While My Guitar Gently Weeps” with an especially strong Jerry Nelson vocal from Floyd, “In My Life” featuring Twiggy and a slide show of her career, “Good Day Sunshine” which morphed into “Dancing in the Dark” when the lights went out… and many many others. According to a Jerry Nelson interview, they tried to get Paul McCartney to host, but McCartney insisted that his band had to be there as well, and the cost proved to be too high.

Sesame Street has also done a number of Beatles parodies over the year, mostly with the parody band The Sesame Street Beetles. The first was “Letter B” by Chris Cerf and featuring Richard Hunt on vocals. I imagine there are a lot of you out there who have heard the song “Let It Be” and started singing “Letter B” along to it. That was followed by “Thinking of U” and “Hey Food”, which had Cookie Monster on vocals. (I imagine John Lennon would have been especially delighted about that last one.) Sesame Street also had a parody called “A Little Yelp From My Friends.”

In 2002, at Queen Elizabeth II’s Golden Jubilee, Paul McCartney sang “Hey Jude” with a group of celebrities behind him, including Kermit the Frog. You can view that performance, as well as several of the Muppets’ Beatle covers and parodies on our Muppet Mindset playlist:

3 thoughts on “Muppet Maestros: The Beatles”