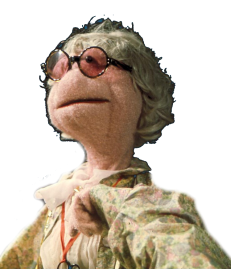 Most recent appearance…
The Muppets: A Celebration of 30 Years (1986)

Hilda is a seamstress and wardrobe mistress for the Muppets and their guest stars on The Muppet Show. She was first introduced in an episode of the program Des O’Connor Entertains when the Muppets appeared to promote The Muppet Show‘s debut. She was part of a round-table discussion with Des O’Connor, Kermit the Frog, George the Janitor, Waldorf, Sam Eagle, and others. Here she is referred to as “costume mistress” for the show.

After her introduction with Des O’Connor, Hilda became a prominent secondary, backstage character on the first season of The Muppet Show. She was often seen talking with Kermit, Fozzie, or Gonzo backstage during the show and even interacted with the guest stars from time to time. She introduced Vincent Price in Episode 119, she brought Charles Aznavour his lunch in Episode 109, was complimented on her hemstitch by Peter Ustinov in Episode 112, and gets Ben Vereen blown up by Crazy Harry in Episode 117.

While mostly a backstage character, Hilda did appear onstage a few times to perform with the cast. Aside from her introduction of Vincent Price, she was a part of the panel discussion asking “What is Man’s Role in the Universe?” in Episode 109, was part of the “Blue Danube” library sketch in Episode 124, and sang back up in multiple numbers including “Friends,” “I Got a Name,” “There’s No Business Like Show Business,” and “(Hey Won’t You Play) Another Somebody Done Somebody Wrong Song.”

But Hilda’s biggest contributions to the show were definitely in her backstage segments. In the second episode of the show, guest starring Connie Stevens, Gonzo begged Hilda to repair his ratty old teddy bear. Hilda refused, claiming the bear was rotten and useless, leading to a funny misunderstanding with Fozzie. Hilda was a major player in Episode 118, guest starring Phyllis Diller, as she tries to make herself look younger. She goes to extreme lengths to appear younger, until finally Kermit reassures her that the Muppets will always love her just how she is.

After Season 1 of The Muppet Show, Hilda fell to the background due to the departure of her performer, Eren Ozker. Although Hilda never had a speaking part again, she appeared in crowd scenes in The Muppet Movie, The Muppets Take Manhattan, and later seasons of The Muppet Show. Her final onscreen appearance was in 1986 in the television special The Muppets: A Celebration of 30 Years. She had a brief speaking cameo as Maid Marian’s (Miss Piggy) seamstress in the 2009 comic book Muppet Robin Hood and the 2010 comic series The Muppet Show Comic Book: Family Reunion, and has not been seen since.

WHY DO THE MUPPETS NEED HILDA?

Although Hilda hasn’t been seen in more than 30 years, she would still make a valuable asset to the Muppet team. Not only would she be another female character in the Muppet roster, but in her prime she was quite funny. Her classic “Hilda ha-ha” moment, which she commented on after making a terrible joke, is just one of the reasons that Hilda was so fun. It’s a shame that she left with Eren Ozker, because Hilda had the makings of a fun, popular character.