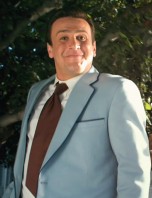 “Walter and I are great sewers!”

Gary is an all-American boy from Smalltown, USA. He was on the baseball team, was in scouts, and even started a local cleaning business with his brother Walter. Gary and Walter’s easy going life is summed up in “Life’s a Happy Song,” which takes us through Smalltown where we meet Mary, whom Gary has been dating since High School. In honor of his and Mary’s tenth anniversary, Gary decides to take Mary on a trip to Los Angeles so they can have a romantic dinner and see the sights.

But Gary feels like Walter won’t be able to survive without him, so they bring him along on the vacation as well. When Walter learns of Tex Richman’s plans to destroy the Muppets, Gary and Mary become part of the search for Kermit. After getting all the Muppets together, Gary volunteers all of his time to helping his new Muppet friends and Mary feels neglected. Gary feels like he needs to stay with Walter, while Mary realizes that Walter has found a niche within the Muppet family.

Gary tells Mary to see the sights and he’ll meet up with her later on. But when he finally meets up with her, he forgets that it was their anniversary and she storms out of their motel room. A confused Gary goes to Walter who is worried about finding a talent, the two end up in a spat over whose life is more important. During the fight, Gary realizes that he forgot the anniversary and rushes back to try and apologize to Mary, but she had already gone back to Smalltown leaving a note asking Gary whether he was a man or a Muppet.

He begins to peer deep into his soul to figure that out for himself; seeing both the man and Muppet within himself, but he realizes that he is meant to be with Mary so he returns to Smalltown. The two watch the Muppet Telethon and although Mary offers to go back and help, Gary once again states that he made his choice, especially since he just sang a whole song about it. But the two eventually head off to L.A., traveling by map, and help bring power back to the Muppet Theater. Gary and Mary’s love inspires Kermit to rekindle his love with Piggy. When the Muppets need their final act, Gary is the one to inspire Walter, because he’s his hero. While watching Walter perform his “Whistling Carouso,” Gary states that “He’s all grown up.”

After the Muppets lose the theater, leave, and see their fans, Gary lets his brother go with the Muppets. Gary joins the cast in the finale of “Life’s a Happy Song” stating that he and Mary will live happily ever after. At the very end of the movie, Gary takes out a ring and finally proposes to Mary who replies with a perfectly placed “Mahna Mahna.”

To be perfectly honest, Gary and Jason Segel are pretty much the same exact person. The Muppets was Segel’s dream project. He had always loved the Muppets and was honored when Disney agreed to let him and Nicholas Stoller write the script. Sadly Jason will not be returning to write or appear in the Unnamed Muppets Sequel. But to be honest having a reoccurring human wouldn’t be very Muppet-y.

WHY DO THE MUPPETS NEED GARY?
Without Gary, the Muppets would have never been saved and Walter would have never found his true place in the world. Gary has his flaws, such as needing to be needed by his brother and just being plain oblivious. Also, without Jason Segel, us Muppet fans might not have as much to be proud of. We need Gary, because without him, the whole adventure wouldn’t have happened, and all we would have is a demolished theater with an oil rig. But instead we have one of the best Muppet adventures we’ve had in years.