Ryan Dosier – Last night for the first time I did something I’ve been meaning to do for a long time… no, not call my Aunt Myrtle–I finally watched the 1979 Christmas television special John Denver & the Muppets: A Christmas Together. After being a Muppet fan for many years, I obviously adore the Christmas album of the same name. The music is uplifting and beautiful, so much so that it is an annual tradition for my family to listen to it every year when the holiday season begins (mostly because of my insistence).

But this was the first time I had ever sat down to watch the special. If you’ve been following The Muppet Mindset for awhile, you know that the other special the Muppets did with John Denver, Rocky Mountain Holiday, is not exactly my favorite Muppet production. Because of this I was only cautiously hopeful about the special, but with my love of the album, and knowing that some of the songs from the album crossover to the special, I knew it couldn’t be all bad. I was right, of course, because when the Muppets meet Christmas good things are bound to happen.

The special begins with John and the Muppets performing “Twelve Days of Christmas,” which has now become one of the most classic renditions of the song. After this, the special really kicks into gear with John and the Muppets sitting around a table and reading the script for the special. Confused yet? Just wait. After Miss Piggy makes her grand entrance, for some reason John leaves to imagine a Christmasy town complete with extras and back-up dancers as he sings “The Pleasure of Your Company.”

After this number, John wanders through the woods and tells the story of Alfiie the Christmas Tree then sings “It’s in Every One of Us.” It’s a nice little story, but the song is wonderful, especially with John singing it. John continues through the woods until he finds Kermit sitting sadly in a bush. Kermit tells John that he’s homesick and tells a few funny stories about Christmas on the pond. Kermit cheers up and sings what is possibly my favorite of his Christmas songs, “The Christmas Wish.” On the album Kermit sings this solo and it’s perfect, but here he duets with John and it’s still lovely.

Later John visits Miss Piggy in her dressing room as she harangues him for more screen time. Miss Piggy is really, really hysterical here. John even starts laughing at one point when Piggy does a funny take. Frank Oz was on fire as Miss Piggy in this special. She’s all over John, but only for more screen time, and it just showcases her true star power at the peak of said powers. A bit later, John sings “Have Yourself a Merry Little Christmas” with Rowlf. It’s yet another beautiful, peaceful moment that will always impress me. It’s incredibly simple but endlessly charming.

Before they jump into their final carol sing, John and the aforementioned extra back-up dancers perform a toy soldier number with Miss Piggy in the role of Fifi. They sing a few songs, they dance, it’s weird… but it ends relatively quickly and we move on. The special starts to come to an end with all of the Muppets sitting with John around a decorated living room. John begins singing “The Peace Carol” and soon Scooter joins in. Anyone who has heard this song on the album knows how perfect it is. John and Richard Hunt’s voices mix gorgeously and it makes for one of the special’s highlights. 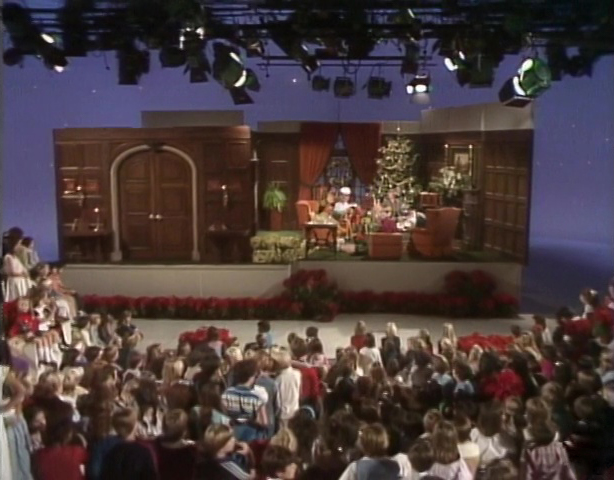 After the song, John recites the story of the Nativity with puppet versions of Mary, Joseph, Jesus, and the rest who make up the story. It’s a poignant scene, but not as poignant as the next, when the Muppets sing “Stille Nacht,” which is “Silent Night” in German, as John tells the story of how the song came to be. They soon shift into the English version of the song and are joined by an entire studio chorus of children. The special ends with a quick rendition of “We Wish You a Merry Christmas” and everyone wishing each other a Merry Christmas.

So that’s the special that the album you all know and love was derived from. It’s a lot of fun, a lot of songs, a lot of heart, and some oddities. Two of the numbers don’t strike a chord with me, “The Pleasure of Your Company” and the toy soldier number. However, any time the Muppets are on screen–especially with John–it’s magical. John has great chemistry with the characters. His scenes with Rowlf, Kermit, and Miss Piggy are delightful, and singing him so believably singing with Scooter and the others is wonderful. I think Miss Piggy completely steals the show in this special, but Kermit is right up there too. You can’t beat the frog when he’s being heart-warming.

This special is nowhere near as good as A Muppet Family Christmas, but it is a terrific entry in the Muppet Christmas canon (not to be confused with Gonzo’s Christmas cannon) from the golden age of the characters. Jim, Frank, Richard, Jerry, and Dave were all completely at the top of their games when this special was made, and it shows. Don’t believe me? You can watch the entire special for yourself on YouTube!

As they say in the special… Peace on Earth and Good Will towards men, women, frogs, chickens, dogs, bears, and Dizzy Gillespie!

2 thoughts on “Muppet Retro Reviews – John Denver & the Muppets: A Christmas Together”