Ryan Dosier – Yesterday we posted the guidelines for our brand new (but actually old) article series The Great Muppet Survey. Today, I thought I would kick off the series with my answers to the survey questions to possibly inspire you to send me your answers too! So… without any further ado, here we go!

1.   Who are your three favorite characters from The Muppet Show, Muppets Tonight, The Jim Henson Hour, the Muppet movies, etc. and why?

First and foremost always has been and always will be Gonzo the Great. It could easily be argued that Gonzo made me a Muppet fan because I connected with his desire to be accepted despite his oddities. My second favorite is Pepe the King Prawn. I immediately fell in love with Pepe the first time I saw Muppets From Space and I still can’t get enough. He’s kind of the anti-Muppet and I love it. Third but definitely not least is Fozzie Bear. Every time I’ve taken a Muppet personality quiz online, I always end up with Fozzie. He’s innocent, caring, tenacious, and just a perfect character.

2.   Who are your three favorite characters from Sesame Street and why?

Grover is my very favorite Sesame character, period. I find him absolutely hysterical and he reminds me of Gonzo in that he never, ever gives up. Grover loves unconditionally and I think he’s spectacular. Second would probably be Big Bird. It’s hard to think of a more wonderful character than Big Bird. He cares about everyone, he’s curious and smart, he’s just amazing. Third… probably Count von Count. The life and spirit and love and humor that Jerry Nelson instilled in this character was amazing. I wish I loved anything as much as the Count loves counting.

3.   Who are your three favorite characters from Fraggle Rock and why?

Wembley recently became my favorite Fraggle. His undying dedication, willingness to do whatever it takes, and pride in being a wimp remind me a lot of myself. Second would probably be Traveling Matt, simply because he’s hilarious and Dave Goelz is always the best. Third is Marjory the Trash Heap. She’s just so… lively and spirited and beautiful (for a heap of trash, that is), and boy when she starts to sing? Forget about it!

4.   What is your favorite television program starring any of Jim Henson’s creations (e.g. The Muppet Show, Sesame Street, Fraggle Rock, Dinosaurs, etc.) and why?

While I adore Sesame Street for it’s longevity and constant revamping to suit the needs of children, and Fraggle Rock for its sheer perfection in a mere four seasons, The Muppet Show is hands down my favorite. The humor, heart, talent, intelligence, and skills that brought this show to life have never been matched, in my mind. It was a perfect storm of writers, performers, guest stars, and characters. I will always be in the mood to watch the Raquel Welch episode or the Star Wars episode or the Pearl Bailey episode–or any episode.

5.   What is your favorite Muppet movie and why?

Such a hard question. (So why did I ask it?!) It changes so often that it’s really hard to say. Usually it’s The Great Muppet Caper (and I just watched that the other night, so it’s currently my favorite), but I think The Muppet Movie is perfect and The Muppets is insanely special to me for many, many reasons. But in the end… I always come back to Caper. It’s consistently hilarious throughout the entire movie. You barely get a second to stop laughing before something else cracks you up again. Whether it’s Beauregard driving his cab, Fozzie making some hilarious remark, Gonzo doing a photographic essay on kneecaps, or Miss Piggy being 100% perfect… The Great Muppet Caper is, in my mind, the best.

6.   What is your favorite Muppet/Sesame/Fraggle song and why?

Again, this one changes all the time too. I love “Life’s a Happy Song,” “I Don’t Want to Live on the Moon,” “Wemblin’ Fool,” and so many songs from all over the Henson universe, but I think my favorite would have to be “I’m Going to Go Back There Someday.” Gonzo’s anthem from The Muppet Movie is hauntingly beautiful and the lyrics are amazing if you really listen to them. It’s a theme song for hopes and dreams and finding that place you’ve never been but still know how to get to… it’s great.

7.   If you could have dinner with any living Muppet performer who would you choose and why?

This is hard for me because I have had dinner with Bill Barretta and conversations with practically every other major performer. I think I would have to say Steve Whitmire, though. The three times Steve and I have talked, we’ve gotten along famously and I would really like the chance to just sit and talk with him for a meal. He’s beyond impressive and completely brilliant that I’m sure I could talk to him for hours and never get bored (although he might get weirded out).

9.   If the President called you and asked to discuss Muppet projects, what would you tell him was the “Greatest Muppet Moment of All Time”?

How is anyone supposed to answer this? I can’t believe I asked it. Sheesh. Umm… I’m gonna go out on a limb and take a risky choice and say “Bohemian Rhapsody” from 2008. I know, I know, how can I say that’s better than everything from the classic period? Well… because to me, most everything from the classic period is gold. But it wasn’t truly until “Bohemian Rhapsody” that I knew the Muppets could be as amazing and incredible as they always were. It gave me hope and it because my greatest Muppet moment of all time, Mr. President.

11.   If a judge ruled that Grover had to be your personal assistant for a month, what jobs would you have him do?
He would absolutely attend every single class. I’m sure my teachers would love him so much I would never fail.

12.   In your opinion, what is the worst Muppet production ever made?

The Muppets’ Wizard of Oz. It was made in such a crazy transition period for the Muppets and the franchise that nothing really worked (except Pepe and Johnny Fiama, who keep the movie from being completely unwatchable). Thank goodness it’s basically a forgotten footnote at this point.

13.   Who is one celebrity you would love to see cameo in the next Muppet movie?
Steve Carell or Kristen Bell. Please?

14.   If you could take a picture with any Muppet, who would you choose and how would you pose?
Fozzie Bear. We would both be trying really hard to tell a joke and no one would be amused.

15.   What is your favorite piece of Muppet merchandise that you own? (Feel free to include a picture!)
A signed picture of Walter, sent to me by my absolutely amazing friend Peter Linz. It’s the craziest, greatest thing I’ll ever own… check it out below. 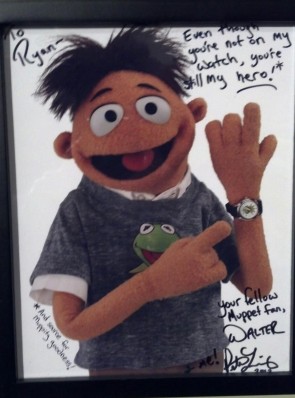 So that’s The Great Muppet Survey! It’s easy and actually quite a lot of fun to fill out these answers so… I highly recommend doing it! Submit your answers to the questions above to muppetmindset@gmail.com and join the fun!