Ryan Dosier – Greetings, class! Welcome to May the 4th. Today the world (or at least the nerds of the world) celebrate Star Wars because today’s date sort of sounds like the Star Wars mantra “May the Force be with you.” Anyway, rather than fight against this holiday (who are we to deny anyone the right to celebrate?), we thought we would lean into it by showcasing some of the Muppet connections to Star Wars in pictures! (No, it’s not our traditional way of holding class… but it’s almost summer, and we’re getting lazy.) 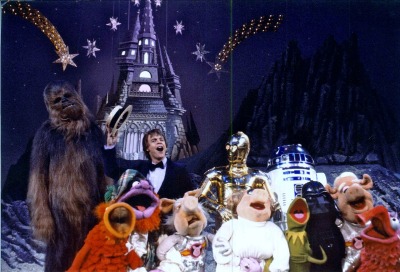 Dearth Nadir hijacks the S.S. Swinetrek on The Muppet Show (1980)

One of Muppet Babies many Star Wars references (1984)

Oscar the Grouch with Darth Vader in Night at the Museum: Battle of the Smithsonian (2009)

Darth Chicken in “Elmo: The Musical” on Sesame Street (2012)

Disney Parks Muppets/Star Wars action figures (2011)
Well class, that’s about all the time (and energy) we have today. Your homework assignment is to watch The Muppet Show Episode 417: Star Wars and practice gargling Gershwin.

So long, Muppet fans, and may the Force be with you!