As Fraggle Rock‘s 30th Anniversary continues its year-long celebration, big time news sources are showing their love for Jim Henson’s classic show. This includes TIME.com, which has released a great new article “Ten Facts About Fraggle Rock” with help from Muppeteer extraordinaire Dave Goelz. There’s some really interesting stuff in there–and I did actually learn some stuff I didn’t know. But perhaps the biggest reveal of the article is that The Jim Henson Company is still working on a Fraggle Rock Movie. Who knows if or when it will happen… but it’s good to hear official word that one is still in the works.

Speaking of Fraggle Rock‘s 30th Anniversary, a brand new release of the Complete Series of the show on DVD came out yesterday. As a preview of the features of the release, The Jim Henson Company, Nerdist, and MTV have partnered once again to present two amazing videos from the bonus features. First is a fantastic chat with head writer/co-creator Jerry Juhl and Gobo Fraggle. The second video features Muppet workshop genius Faz Fazakas and Cotterpin Doozer. Check out both fantastic videos below!

A few months ago, Sesame Street announced its first ever open casting call searching for a new Latino human neighbor for the show. Well, they’ve finally made their decision in the form of Ismael Cruz Cordova, who will portray Armando on the show! Congratulations to Ismael, I’m sure I’m not alone in saying that I can’t wait to meet and get to know Armando next season on Sesame Street. Lucky for you, our friends over at ToughPigs.com have collected a host of different videos about Armando’s journey to Sesame Street, including his big reveal on Good Morning America.

As you’ve probably heard by now, The Muppets… Again! was seen filming on Hollywood Boulevard last Wednesday night. The folks at SlashFilm have deduced that the scenes they were filming may indicate that The Muppets… Again! may open mere seconds after The Muppets ended. Check out the pictures to decide for yourself. As some of you might also know… I just happened to be on set that night. I cannot reveal anything at all, but you can expect an article about my experiences on Friday!

Finally, our friends over at Threadless are hosting yet another Muppet-related t-shirt design contest. This time, they’re paying tribute to Fraggle Rock‘s 30th Anniversary as well with a host of amazing (and a host of not-so-amazing) t-shirt designs featuring the Fraggles, Doozers, and Gorgs. There are a ton of entries (and our friends at ToughPigs are reviewing them all), but below are five of my personal favorites. 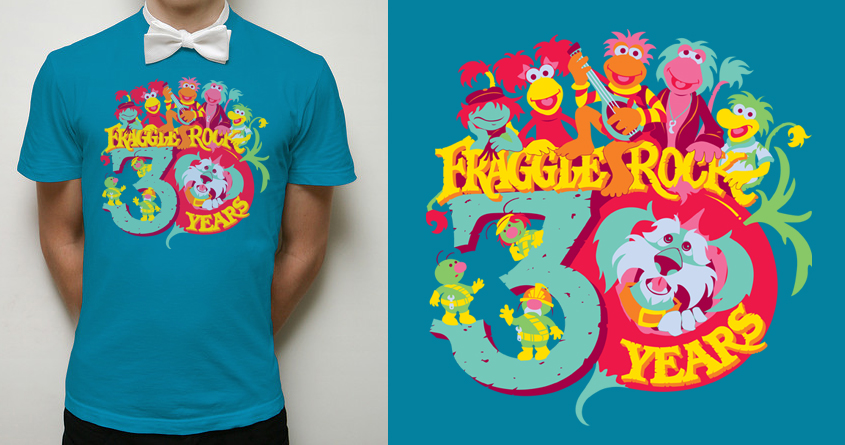 The final entry comes from our friend and frequent featured artist and always-awesome James V. Carroll, so we’re slightly biased… but c’mon, it’s still awesome. (So are the others! And many more that I didn’t feature here! Just go vote and decide for yourself, quit putting pressure on me–AHHHH!!!)