Written by Ryan Dosier. Special thanks to our friend Chris Stulz for his always-stellar Photoshop work! 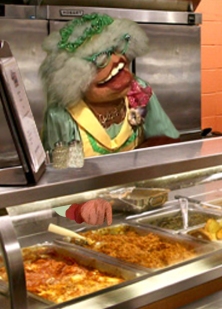 Gladys is the leader of the Muppet Theater’s canteen and cafeteria, serving food to the cast and crew of The Muppet Show. Gladys only appeared in the first half of Season 3 of The Muppet Show, but she was quite memorable as one of the few female characters to be featured prominently. Gladys worked alongside The Swedish Chef in the canteen, helping to serve up his inedible food.

Gladys’s physical appearance was quite distinct. She wore sparkly green glasses and a sparkly green headpiece. Her gray hair was untamed and spread around her head. Perhaps Miss Piggy requested that all other female characters be unattractive compared to her. Richard Hunt performed Gladys with an obnoxious, high-pitched voice that could be very funny as well as annoying.

Gladys’s final on-screen appearance was a small cameo in the “Rainbow Connection” finale in The Muppet Movie. However, she also appeared a few times in the recent Muppet comic books; most notably in The Muppet Show Comic Book series “The Treasure of Peg-Leg Wilson.” Gladys also made an illustrated appearance in the 2012 kids book The Muppets: Doodle Book where aspiring doodlers could draw food for Gladys to add to her soup of the day.

WHY DO THE MUPPETS NEED GLADYS?
Gladys obviously failed as a character because she was dropped from The Muppet Show so quickly and unceremoniously. But in a world where Uncle Deadly can have a featured role in a new Muppet movie, maybe anything is possible. Gladys did add to the dwindling roster of female Muppet characters, but she wasn’t a great representation of females… Basically, I don’t know why the Muppets need Gladys. I guess to serve them their food. 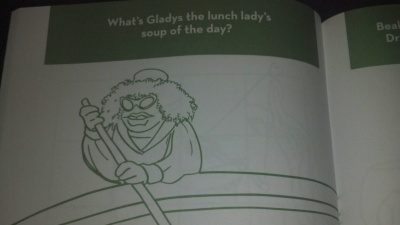