1. Who are your three favorite characters from The Muppet Show, Muppets Tonight, The Jim Henson Hour, the Muppet movies, etc. and why?
My favorite Muppet has to be Rowlf the Dog, I have been a huge fan of Rowlf because the way he plays the piano and sings. My second favorite is Gonzo The Great, he is just like me at times, weird and strange. Finally, Fozzie Bear. Like Fozzie I try to tell jokes but they backfire every once and a while.

2. Who are your three favorite characters from Sesame Street and why?
As a child growing up I watched Sesame street from the very beginning. Big Bird has always been my favorite because of the way he loves to do artwork. Would you believe my second favorite is Oscar the Grouch? Yes, as a fan I grew up loving “I Love Trash.” The third one is a tie between Ernie and Bert. When I first saw them I had thought that they were brothers. 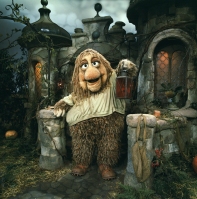 3. Who are your three favorite characters from Fraggle Rock and why?
Junior Gorg is my favorite. Why? Because he is big and goofy. Second is Cantus. I love that song of his “Let Me Be Your Song.” Boober is third. Sometimes I feel like having that quite day.

4. What is your favorite television program starring any of Jim Henson’s creations (e.g. The Muppet Show, Sesame Street, Fraggle Rock, Dinosaurs, etc.) and why?
A tough question since I have seen them all, so I will say all of them. The reason? Because of the magic that Jim created.

5. What is your favorite Muppet movie and why?
The Muppet Movie was my very first one and dear to my heart. 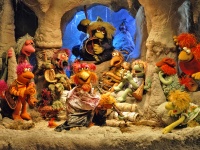 6. What is your favorite Muppet/Sesame/Fraggle song and why?
From Sesame Street, “I Love Trash,” Oscar’s signature song. From The Muppet Show it has to be “Bein’ Green.” And from Fraggle Rock it’s “Let Me Be Your Song,” which was played at my wedding.

8. If you could tell Jim Henson one thing, what would it be?
This was my dream, to shake his hand and to thank him for the magic he gave us.

9. If the President called you and asked to discuss Muppet projects, what would you tell him was the “Greatest Muppet Moment of All Time”?
The time that the Muppets finally got a star on the Hollywood Walk of fame.

11. If a judge ruled that Grover had to be your personal assistant for a month, what jobs would you have him do?
Well to help me with my house work and to put smiles on faces.

12. In your opinion, what is the worst Muppet production ever made?
It is hard to say because I love the Muppets no mater what.

13. Who is one celebrity you would love to see cameo in the next Muppet movie?
Frank Oz or Caroll Spinney

14. If you could take a picture with any Muppet, who would you choose and how would you pose?
I would choose Gonzo and Rizzo and pose in a funny way.

15. What is your favorite piece of Muppet merchandise that you own? (Feel free to include a picture!)
My Big Bird from Build-A-Bear.