Ryan Dosier – Isn’t life funny? One minute, it’s 2013, the next, it’s 2014, then it’s May 2014 and you realize it’s been literally an entire year since you had one of the greatest experiences of your life. What’s worse, you realize it’s been a year and you haven’t written anything about one of the greatest experiences of your life. I can attribute this to many things… lack of approval from Disney, not wanting to spread spoilers–but mostly it’s just me forgetting to sit down and write. But that’s being fixed right now!

One year ago today, May 6, 2013, I was on a a bus headed for Los Angeles Union Station. I had been invited by my amazing friend Peter Linz to be his guest on the set of Muppets Most Wanted while they filmed a few scenes in LA after months of filming in London. It was (and still is) an unbelievable gift for Peter to invite me and a really, truly can never thank him enough or repay him for what I got to experience over the few days I was there.

I arrived at Union Station around 9:00am. Peter had told me to get there at 10, but I wanted to make sure I was there early enough. Getting there at 9 happened to work out extremely well, because as I was walking through the station trying to get my bearings, I just happened to run into Bill Barretta. Bill and I go back almost five years. He was the first Muppet performer I ever interviewed and met in person so it’s oddly fitting that he became my guide through my first on-set Muppet experience. Bill swept me up and walked me around, showing me the train platform where they would be filming.

As we were walking out onto the platform, a security guard stopped us (obviously, since he was guarding a big-budget film set) and Bill simply told him, “We’re with the Muppets” and we got through. Me. I was with the Muppets. It was unbelievable just to hear those words… and then we went out to the train platform. There were large black crates, obviously holding the Muppets themselves. There were animatronic rats sitting on boxes that Bill was delighted to show off. Thog’s head was sitting on the ground and Bill said, “Go ahead and touch him. Take a picture if you want.” So obviously I did. Then I nearly fainted. 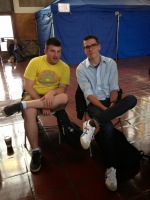 Somewhere in here, I ran into my buddy Matt Wilkie, who was on set as a correspondent for ToughPigs. I can’t express how glad I was to have Matt on set with me. Not only is he a fantastic person to have around anytime, anywhere, but he was just as geeked out and freaked out as me. The number of times Matt and I turned to each other and mouthed “Oh. My. God.” or audibly gasped together is too many for me to count. We had a blast and there’s no one I would’ve rather had alongside me on set that day.

After Bill walked us around the set, he took Matt and I to the main hub where the extras, puppeteers, and crew would wait in-between and after takes. The first person we ran into was Steve Whitmire. Steve, who I had met a handful of times before, lit up immediately when he saw us. We talked for a little bit about the movie, he signed a photo of Kermit I brought, and took photos with Matt and I. Then I believe he said, “I’ve gotta go out front and film something. Will you guys be around later?” Matt and I, stars in our eyes, nodded, and Steve said, “Great! We’ll talk more” and went off to be Kermit the Frog. Nuts.

After our Steve encounter, Matt and I discovered the bounties of craft services (thanks to Muppets Studio chief Debbie McClellan, who assured us it was fine that we eat something) and had some coffee (bad idea, considering how jittery I already was) and breakfast. We sat down with the group of extra hands–the background Muppet performers. It was such a treat to talk with hugely fun and talented folks like Nathan Danforth (my awesome friend), Michael Oosterom, Bruce Lanoil, and Mike Quinn. Mike, especially, was incredible to talk to, with more than 30 years of history with the Muppets, plus credits in Star Wars (he’s Nien Nunb!!) and Who Framed Roger Rabbit? Mike and all of the puppeteers treated us so well and I’m so glad to call them friends.

After awhile, Bill came back and assigned each of the puppeteers a character to perform. He sat down and rattled off names such as Wayne, Lips, Lew Zealand, Janice… I’m pretty sure I sat slack-jawed just hearing the Muppets I’d get to see in person. After he was done, Bill told Matt and I we could follow him out onto the platform. When we got there, we saw Kermit the Frog and I had to stop for a second. I had seen Kermit in person a few other times before, but I was never this close. I was six feet from the frog and he was on camera working his magic. The scene he was filming was unfortunately cut from the final film, but every take there was a line that required Kermit to turn and point. Each time he did, he looked directly at me and pointed, and each time my heart skipped a beat.

The scene they were filming also featured lines from Scooter and Beauregard, so David Rudman and Dave Goelz were standing off camera feeding the lines to Kermit. In between takes they both came over to talk to me and Matt. They were incredible as always (duh). During one conversation with David, he was so into our talk that he actually missed his cue. It was hilarious and probably my fault entirely… but everyone got a good laugh out of it. Eventually we were found by Matt Vogel and Peter Linz, who are two of the greatest people I know. They took us to more craft services and then talked to us for what felt like an hour chatting about the movie. Matt said, “Your the fans, ask us anything!” and they answered. It was crazy. It was here I first found out Matt was performing Constantine, found about about a helicopter scene, Walter jumping from a moving train, and more.

While we were talking with Matt and Peter, one of the puppet wranglers walked by carrying no fewer than six Muppets–including Dr. Teeth and Janice–and asked Peter if he wanted to take Walter now. He gave Matt and I a sly grin and said yes. Then he put on Walter and he came to life. Walter talked to Matt and I for a little bit and I seriously felt like a kid in a candy store. It was one of the coolest things I’ve ever gotten to do. It was my own private little moment with Walter and it doesn’t get better than that.

And then they called for the puppeteers to get in place and true Muppet magic was turned on. There, directly in front of me, maybe four feet away, was Kermit the Frog, Fozzie Bear, Gonzo, Walter, Scooter, Rowlf, Swedish Chef, Floyd, Animal, Dr. Teeth, Janice, Zoot, Lips, Bunsen, Beaker, Wayne, Lew Zealand, Sweetums, and Thog. I couldn’t believe what I was seeing, and honestly I still don’t believe it. It was truly breathtaking and like a dream to see all of these Muppets alive right in front of me. It was fascinating to see James Bobin direct them (and boy is he brilliant at it). I honestly don’t know if I’ll ever see anything quite like that again. I have no words to explain how utterly amazing it was.

After they wrapped the scene, the Muppets were whisked away (I’m still miffed I didn’t get a picture with Lew Zealand) and Matt and I finally got to talk to Eric Jacobson. Eric is really the nicest guy around and one of the easiest people to talk to. He signed a picture of Fozzie I brought and then asked Matt and I if we were sticking around for lunch. I believe we said, “If we’re allowed to” and he said, “Of course you are! Come on with me.” So Matt and I started to follow Eric… but then we had to stop because we saw Peter and Walter chatting with the members of the press that were on set that day. Eric went on to lunch and we told him we’d catch up with him later.

Thank goodness we stuck around, because, thanks to Debbie McClellan, Matt and I got to sneak into the back of the line of press people getting their photos with Walter. When I got to Walter he said, “Hey, hey, Ryan! What pose should we do? Ooooh! I got it!” Walter then jumped on my shoulder and grinned wildly… and so did I, because how can you not? Then this picture happened: 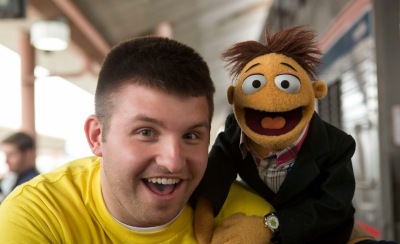 And I think that’s where I’ll stop the story for today. What happened the rest of that day is more than enough to fill another article, and then there’s a whole other day on set as well! There’s still lots more story to come, Muppet fans, so be on the lookout for Part 2 and Part 3 of my incredible visit to the set of Muppets Most Wanted–a year later!

5 thoughts on “The Muppet Mindset Most Wanted, Part 1”