WHO IS ALICE SNUFFLEUPAGUS?

Alice Snuffleupagus is the baby sister of… well, you can probably guess. She popped up at her brother’s side on Sesame Street during the show’s 19th season and remained a prominent character for the next several. Speaking strictly in babyish phrases of two or three words maximum, little Alice is sweet and curious, if mischievous and naïve.

Perpetually two years of age, Alice is one of the youngest residents of the street. As a result, she, like many young children, struggles with using her manners and communicating. Luckily, Alice is growing up on Sesame Street. Here, with help from Snuffy and their many neighbors, she is learning new words, concepts, and social behaviors every day, in addition to having a lot of fun, just like a good percentage of the viewership. Talk about relating to your audience!

Alice is almost never without her older brother, Aloysius Snuffleupagus. The two are very close, even as Alice’s inexperience and desire to mimic Snuffy frustrate him occasionally. Yet, they have a lot of love for each other, and the mutualistic relationship provides Snuffy an opportunity be a leader and teacher, while Alice gets to learn about the world. The pair dance, roller skate, recite the alphabet, explore, and play together, and neither would have it any other way.

A handful of episodes, as well as a good number of storybooks, had plots centered on Alice. Episode 3781 featured the little Snuffleupagus learning how to control the air puffs coming from her trunk. In episode 2621, Snuffy and Big Bird become devoted to creating a baby book for Alice. Alice and her brother were babysat in episode 3524, while episode 3775 focused on Alice’s throwing of temper tantrums, and her subsequent ending of the behavior.

Because Alice is so small, she isn’t performed like the other Snuffleupagi, with one performer each in the front and the rear. She requires only one puppeteer, Judy Sladky, who buckles herself into the costume and then crawls around on all fours, operating the mouth and doing the voice when necessary. The blinks and rolls of Alice’s long-lashed eyes are controlled via radio control from across the room. As far as performing full-body Muppets go, Judy Sladky has an exceptionally difficult job, for there is no room in the suit for a monitor on which she can view her progress.

Alice hasn’t been seen on Sesame Street since Season 31, and it’s really a shame. An important part of Sesame Street is exploring various relationships, and Alice and Snuffy are the best examples of young sibling interaction that you will find on the show. Whether a child viewer is the older or younger sibling in their particular relationship, they can identify easily with the Snuffleupagus siblings and their misadventures.

In addition to that, let’s be honest: she is easily one of the most adorable creatures ever to grace Sesame Street. Alice Snuffleupagus’s appealing design coupled with her endearing personality make her a welcome presence on the show any day. 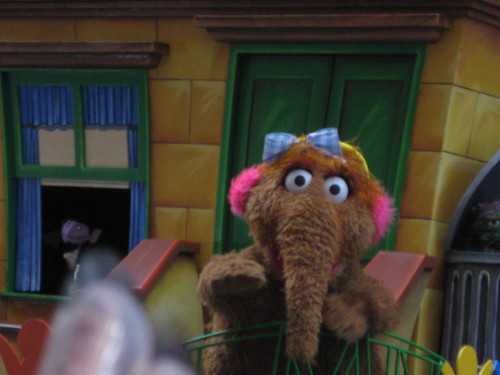