Leon is a sneaky, snarky, conniving pink and purple lizard who worked in Muppet Central on The Jim Henson Hour. While Leon’s role is basically unknown, he still appears in nearly every episode of the show’s short run. As well as being a primary performer on The Jim Henson Hour‘s new cast of characters, Leon became one of the first main Muppets performed by Kevin Clash. Leon was one of the first new-age Muppets in the wave of non-returning characters that came about in the 1990s.

In his plot-lines on The Jim Henson Hour, Leon was mostly involved in plots to overthrow Kermit and sleaze his way into the show. In the cold opening to Episode 103, Leon brings a blonde Whatnot girl to the show, promising her a job. Later in that same episode, Leon joins forces with Gonzo, and together they convince Kermit to take a vacation so they can take over the show. Of course, they soon find out that running the show is much more difficult than they expected, and they go to great lengths to get Kermit back.

Leon continued to run amuck in Muppet Central throughout the run of The Jim Henson Hour. He appeared above Kevin Clash in the episode “The Secrets of the Muppets,” finally getting to show off his tail on camera. Leon also joined the rest of The Jim Henson Hour Muppet cast when they appeared on The Cosby Show episode “Cliff’s Nightmare.” Leon tries to sell Dr. Cliff Huxtable (Bill Cosby) a hall pass… in his own hospital. Obviously that doesn’t go too well for Leon.

Leon has not appeared since The Jim Henson Hour ended and he appeared briefly on The Cosby Show in 1990.

WHY DO THE MUPPETS NEED LEON?
Leon provides an interesting dichotomy in the Muppet cast, being one of the few sleazy, con-artist type Muppets. It would be interesting to see Leon interacting with the likes of Pepe and Rizzo to pull a big con against Kermit and the gang. It’s highly unlikely that we’ll ever see Leon again, but with his unique design and clever personality, he would fit in well if he were ever to return in some capacity. 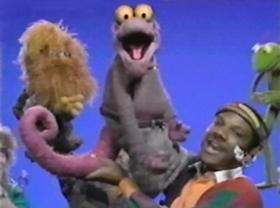