WHO IS MATT VOGEL?
Matt Vogel, born in October of 1970, is an accomplished puppeteer who joined the Sesame Street troupe in 1996, currently serving as the show’s Muppet Captain. Vogel was first heard as Caroll Spinney’s understudy for Big Bird, providing the bird’s voice during green-screened inserts, most notably the recurring segment “Journey to Ernie” from Seasons 33-36. Interestingly, when Matt Vogel was introduced to Caroll Spinney at his first audition for the part of Big Bird, the latter remarked, “Vogel is German for Bird. That’s a good sign.”

Vogel is now more famously known as having taken over a majority of Jerry Nelson’s characters, due to Jerry’s own recommendation as well as his semi-retirement from active puppeteering in the late 2000s. After Nelson’s death in 2012, Matt fully inherited The Count, now providing both the voice and puppetry. He also played Baby Big Bird in the Sesame Beginnings DVD series. Over time, Vogel has also accumulated his own recurring characters on Sesame Street, including Herb the dinosaur and Hansel. His early Muppet credits include work on Big Bag, Bear in the Big Blue House, Sesame English, and The Adventures of Elmo in Grouchland, as well as singing pigeons for the Creature Shop in the remake of the film The Producers. He also has the distinction of being one of many on-set directors for Sesame Street, beginning with Season 39 and the recurring segment, “Murray Has a Little Lamb.” 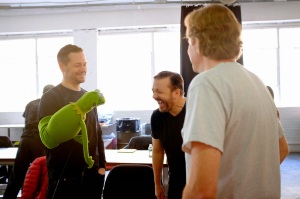 Matt became a star in the Disney-owned Muppets side of things in 2008, when he was made one of the lead Muppet performers and the permanent performer of most of Jerry Nelson’s characters, including Floyd Pepper, Lew Zealand, Crazy Harry, Robin the Frog, and Uncle Deadly. In The Muppets in 2011, Matt also took on the role of Sweetums and originated the role of 80s Robot. Matt’s star rose to great new heights in Muppets Most Wanted in 2014, where Matt originated the role of Constantine, the World’s Most Dangerous Frog.

Outside the Henson fold, Matt has worked on the video series “MATHmatazz,” Jack’s Big Music Show, The Puzzle Place, the HBO drama Oz, Oobi, Blue’s Room, and Between the Lions. In theater, Vogel has acted in regional productions of various plays, including The Foreigner and Six Degrees of Separation, and was involved in the 2003-2004 Broadway run of Little Shop of Horrors, manipulating Audrey II and playing various bums and Skid Row residents (alongside Martin P. Robinson and Anthony Asbury).

In addition to puppeteering, Matt’s interest in music is made evident by his non-Sesame role as front man for the band, The Mighty Weaklings who released a CD of songs “for kids–and grown-ups” called You Can’t Rock Sittin’ Down in June of 2008 after appearing in the video for their song “Rocket Ship” on Jack’s Big Music Show. Their most recent album is “Keep it Weak,” and it’s a knockout.