James Gannon – The Fraggle’s journey continues in “Journey to the Everspring” Issue 2, Archaia’s latest Henson based offering. When the Rock runs dry, it’s up to Gobo and the rest to find the restorative waters deep within their cavernous home. Writer Kate Leth and artist Jake Myler have done a remarkable job with this series, capturing the characters and settings to a TV perfect T.
Continuing on their quest, fear runs high in Boober and Wembley (naturally) as they’re surrounded by horrible creatures, and they can see and even more terrifying ones left up to their imaginations. True to the series, songs are sung and Uncle Matt Postcards are read. Anything else I’d say about the plot line would inevitably spoil it, so I’m cutting you off there.
I’ve been speaking the praises of Muppet based comic books for years since the original BOOM! Muppet Show series came out. The overall picture is that these licensed comics based on existing licenses both current and nostalgic have been solidly getting better since the 90s. There have always been one off comics based on animation, movie, and television projects, and up until now they’ve been hit or miss. They either capture the spirit and humor of the project, fail to do so, or just split the difference and basically reprint a story already used on television.

That’s what the 80s Fraggle comic did by the third issue, but at least you have Marie Severin’s artwork going for it. I once bought a “Dudley Do-Right” with terrible art and poorly adapted dialogue that would fall deeply into terrible territory. As for the ones that were just blatant merchandise based tie-ins, I’ve read some incomprehensible “Yogi Bear: comics from the 60’s (reprinted, of course). There was a sharp turn in the 90s with “Looney Tunes: comics that felt like the cartoon characters, “Ren and Stimpy,” and “Animaniacs.” Today, these comics are treated more like a medium than a merchandising tie in, and the Muppet-based comics have been no exception. Great art, great writing, true to character settings and plotlines. I’m glad we have Fraggles continuing this line of excellence. And we have the likes of Jake Myler and Kate Leth to think for this particular series. 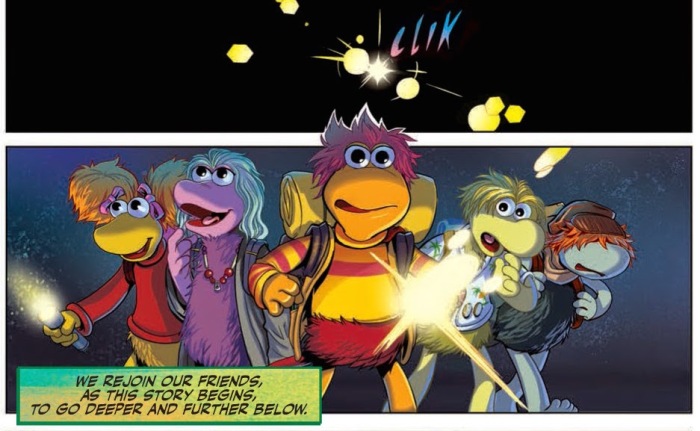