GHOST OF CHRISTMAS PAST

Only appearance…
The Muppet Christmas Carol (1992)

Best known role…
The Ghost of Christmas Past

Memorable quote…
“I told you, these are the shadows of the things that have been. That they are what they are, do not blame me.”

WHO IS THE GHOST OF CHRISTMAS PAST? 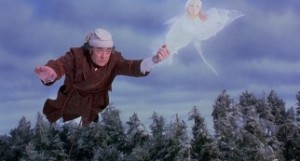 The Ghost of Christmas Past is the first spirit sent by the Marley brothers to save Ebenezer Scrooge’s soul from an eternity in chains for his selfish acts in life. The spirit resembles and sounds like a young girl, but according to her, has been around for “nearly nineteen hundred years.” She has humanoid facial features, orange hair, flowing white garb, and ethereally floats through the movie. As her name implies, she takes Scrooge on a trip through the Christmases of his early life, specifically ones that showcase his solitude and unsympathetic demeanor.

The ghost begins the journey down Scrooge’s memory lane by flying him, along with omniscient narrators Charles Dickens and Rizzo the Rat, over the city of London, through time and space, to Scrooge’s old school. He sees his younger self—a solitary, cranky child mentored by Sam the Eagle—growing up spending various Christmases the same way, alone. It shows that Scrooge has always been alone at Christmas and that he never associated parties, family and festivities with the holiday.

After this, she shows Scrooge two Christmases featuring himself as an already-miserly young man. The first spotlights him working at Fozziwig’s Rubber Chicken Factory and meeting eventual fiancée Belle. This segues to the ghost’s grand finale in the breaking down of Ebenezer Scrooge’s wall—when Belle ends her relationship with Scrooge due to his perpetually parsimonious unwillingness to commit to marriage. Reliving the memory leaves Scrooge in tears, so the Ghost of Christmas Past, her mission accomplished, leaves him to the mercy of the Ghost of Christmas Present.

PERFORMING THE GHOST OF CHRISTMAS PAST
To achieve the floating, flowing effect of the Ghost of Christmas Past, she was puppeteered and filmed in a tank of baby oil, and eventually water when the oil got too expensive and cumbersome. The puppetry for her was much like a standard Muppet, but with the performers reaching down from above. She was later matted into the film with Scrooge and company, and voiced over by nine-year-old British actress Jessica Fox.

WHY DOES SCROOGE NEED THE GHOST OF CHRISTMAS PAST?
The Ghost of Christmas Past gives Scrooge a guilt trip that infiltrates his stony defenses and allows the other spirits to sway him more easily. That isn’t to say that she herself doesn’t have any influence on his character development. By showing him the particularly painful moments of his past Christmases, most self-inflicted, she illuminates to him that his curmudgeonly personality hasn’t only damaged other people’s lives, but his own as well.