Last week we posted part one of my interview with Muppet director and writer extraordinaire Kirk Thatcher, and I’m excited to proudly bring you the second installment of our in-depth interview. In this week, we’ll be discussing a little more about the fate and creation of Muppets Tonight and the creation behind Muppet Treasure Island!

Mitchell Stein: The humor in the Muppets Tonight scripts were edgier than what the crew took on in Muppets Tonight. Would you say there is a specific reason for that change?

Kirk Thatcher: Yeah, well we really had to compete with what was on television at the time. I mean we were up against South Park and Ren & Stimpy so there was a need to create a bit of an edgier side to the Muppets in order to be a worthy component.

The Muppets were quaint and charming in the 70’s because they were doing riffs on 70’s style variety shows. One of my concerns, which was my concern and not necessarily the company’s was something that Jim and I even discussed once: The Muppets are not Sesame Street. They are not meant to be a kid-franchise. They are meant to be kid-friendly, but not geared exclusively to kids. A good example would be the Muppet Show pilot episode was named Sex and Violence and was supposed to be a fun and satirical show that could steer any audience in society and not just tell warm fuzzy stories about a pig trying to marry a frog. People like that, but even Mickey Mouse started out as a bit of a jerk in those old Mickey shorts playing pranks on people. It seems as characters start becoming more beloved, you tend to start writing more softer stories for them and that was one of  the reasons why Pepe the King Prawn was created, I kept saying “we need our Daffy Duck”. 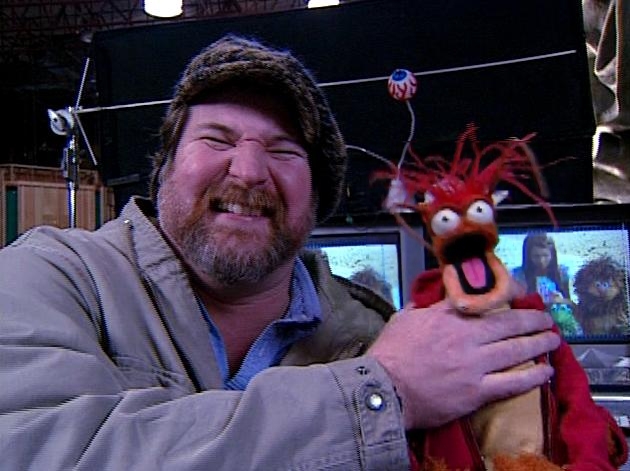 The Muppets at that point have been doing movies and they’ve all been so nice to each other and all that it was hard to creating conflict, and by conflict I don’t mean people fighting (other than Piggy karate chopping) but there wasn’t much happening. They were just kind of odd.

I felt the need to make sure they didn’t become Sesame Street, and was a curse that we’ve been fighting since before I joined the company. I always thought the Muppets were really funny similar to the Monty Python troupe, and they weren’t a kid’s show, which is something that played out strangely when Muppets Tonight won an Emmy for Best Children’s Programming which kind of felt like a double-edged sword. It was kind of like “great work, you won an Emmy” but it was for the exact thing we were trying to work against.

So I think that’s where the edginess comes from. Jim himself had a pretty wild sense of humor, and it wasn’t ever intended for the Muppets to be “safe” and the whole point is that they weren’t always “safe” and I was a big proponent of that. There were obviously a lot of pushbacks, I was kind of vocal about it and there were other people who wanted to keep it safe and I kept pushing for it because I was worried they would just get boring.

MS: Unfortunately, Muppets Tonight didn’t stay on the air for long. Are there any specific reasons to that, other than ratings?

KT: I think one of our setbacks was that ABC was just taken over by a woman named Jamie Tarsis, and she did Friends over at NBC and I remember going over to ABC for a meeting with her and her one question to me was “how are you going to guarantee men 18-35?” If you look a chart of where the Muppets’ score popularity, that demographic is one that doesn’t always score 100%. Once they are married or with their own kids, many people become fans because it’s a show that adults can enjoy with their kids as well, but the demographic between college and having kids is not exactly their strong point all the time so I think they cancelled us (after moving our schedule slot around three times) because they were looking more into that specific demographic and they were looking for the next Friends and they thought we were a kids’ show. I mean I’m not blaming Jamie for any of this, but that seemed to be the attitude of the network at the time.

MS: You were an integral part in the writing of Muppet Treasure Island. Where did the inspiration for the Muppets to take on this story come from?

KT: It came from me being so frustrated about Muppet Christmas Carol being so cute and sweet. I don’t want to come across as a frustrated angry person, but again there was that fear that we needed to keep the Muppets non-kiddy and more family oriented. Christmas Carol kind of made them “bedtime story characters” so I said “Great! We did Christmas Carol so let’s do another period film” which would be a wacky zany comedy. There were a whole bunch of ideas out there and I was most keen Treasure Island and a King Arthur story with medival dragons and knights, in the end we all agreed as a group that Treasure Island was a better story for the Muppets to take on.

MS: I’m assuming the casting of Kermit’s role brushed off to a supporting character was due to the fact that Jim had passed away and the company wasn’t sure how to handle the character at that point?

KT: It’s interesting, because Kermit didn’t really lend himself as Jim Hawkins, at one point we talked about Robin [the Frog] playing Hawkins, but Robin was really just too young for the role. The original story I wrote with Jerry was that Gonzo and Rizzo played Jim, they were two characters Jim and Hawkins. I think Rizzo was Jim and Gonzo was Hawkins if memory serves correctly. So originally they worked for Mrs. Bluveridge and there was no human boy and I remember the studio was nervous that they couldn’t hold the emotional heart of the movie, so eventually the human Jim Hawkins was written in, and we cast Gonzo and Rizzo alongside him.

So, it wasn’t about Kermit necessarily in Muppet Treasure Island as it kind of was in Muppets Tonight, we just didn’t feel that Kermit could carry the story as Jim. We felt there wasn’t any other great leading men roles for Kermit besides Captain Smollet. In my mind, I think placing Kermit in the front of every movie could get kind of boring, I mean we got an entire ensemble to choose from, and Kermit didn’t really fit as the lead role.

MS: Can you tell me a bit about the creation of the famous Muppet viral videos, specifically Boheniam Rhapsody?

KT: That was an idea before the movies were started to sort of bring the Muppets back in a way that people would recognize them, so the best way to that these days is to bring something on YouTube or the internet and go viral. It was meant as a fun video that didn’t cost a lot to make and I think it really paid off and we made a whole bunch of short and funny videos, which I love, because I feel that the Muppets are at their best in short comedy bits.

MS: I also wanted to speak to you about the 2001 Muppet Show (titled The Muppets Present) script that never came to be. Can you explain a little bit about why the pitch never really took off?

MS: According to Muppet Wiki, the pitch is out there somewhere.

KT: We certainly never released it, I think it was really just intended as an in-studio thing as like a short demo for people in the studio to see what kind of show we were intending to make, I remember shooting some segments out on the streets in Hollywood and on the stage. We had Bruce Lanson, who is a very well known comedy writer writing with us, Martin Olsen (currently a writer for Phineas and Ferb) and we drew up some sketches and shot them, but I don’t think it went anywhere beyond that.

EDITORS NOTE: If you want to learn more about this potential television show, some more info is available on Muppet Wiki as well as the entire full script written by Matthew Berry. 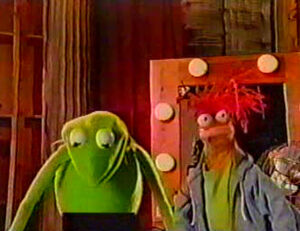 Be on the lookout for Part 3 of our interview with Kirk soon!