In ‘Little Shop of Horrors’, we delve deep in to the world of online shopping to find some of the most horrific Muppet items available.

Jarrod Fairclough – The world is a scary place.  It’s a sentiment that we’ve heard a million times before, but one that bears repeating.  There are, unfortunately, people in this world who want to hurt others.  There are people reading this right now who are petrified of any number of things.  Well, I’m scared too.  But today I face my fears head on so that I can bring you some of the most horrifying Miss Piggy merchandise currently available on eBay…  Spooooooooooky!

Our first horrifying piece of merchandise is this 1980’s Piggy teapot made by Sigma.  Miss Piggy is not an elegant woman.  She’s a tough as nails, karate chopping hunk of ham.  Try as she might, this side of her IS her character, so it’s confusing to me that they made such a rough woman in to such a delicate teapot.  And such a pale one, too.  If you’re going to purchase it, be wary that you’ll probably also need our next item… 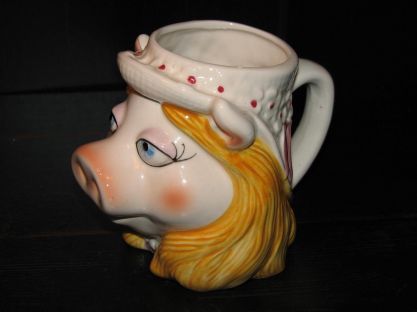 Looking just as lady like and pale as before, only without the curvy body, you too can fulfill your fantasy of drinking tea out of a pigs head.  Also by Sigma, and made as a companion piece to the teapot above, this mug gives Piggy’s role as Rob Schneider’s coffee pig a whole new meaning!

Piggy looks just as horrified as we are about this item.  Who hasn’t wanted to slot a coin in to a pig puppet’s chest?  There are some places where you’d pay good money to do that!
The stare is lifeless, almost as if Piggy’s been caught in the act doing something wrong – either that or she’s performing open heart surgery on herself and the anesthetic just wore off…

I have weird feelings on this doll.  One the one hand, I don’t hate the design of it.  Her face is very reminiscent of the early Miss Piggy puppet, and her necklace is lovely.  But her hair looks like she just got off the end of a 5 day bender, and the flocked texture is a bit iffy.  This looks like something your grandmother had on her shelf when you were 5 that you really wanted to play with but couldn’t.  Then when you were old enough you grabbed a hold of it, and all the anticipation you’ve built up for years suddenly seem like the biggest waste of time ever.  So you put it back, and then for your 16th birthday she gifts it to you, and then you lose it.

I’m doing it.  I’m calling shenanigans.  There is no way in the world that this was ever a real product.  Instead someone put some wool and fake eyelashes on their daughters pink pig toy, and chucked it on eBay so they could afford to buy some smokes…
(An hour later)
Well, slap me down and call me Mary, this isn’t a homemade atrocity.  This is in fact a genuine lady pig hand puppet.  I have serious doubts it was a licensed toy, but it would certainly have to be a rip off of the delightful Miss Piggy.

For the small price of your sanity, you too can own petrifying porcelain porcine, horrifying hand held hog or scary stuffed swine.  We can only be thankful that there is no way known that Disney would EVER released such a terribly designed toy…

One thought on “Little Shop of Horrors – Miss Piggy Edition”