Michael Wermuth Jnr – Count on Elmo is the latest Sesame Street DVD, featuring an extended version of the season 44 episode where The Count is honored with a noble prize for counting. New footage taking place before the ceremony takes up the first half, with Elmo, Grover, Cookie Monster, and Abby Cadabby learning about a contest to award the greatest counter, and decide to nominate The Count as a surprise. In order for the nominee to qualify, they need to video record The Count counting, but submissions for the contest just happen to be due on that day. It shouldn’t be hard to record The Count counting, since he’s always counting, but doing so ends up being more trouble than they expect, as a number of things go wrong when recording, but they eventually succeed in getting him nominated and he wins, leading to the street story in which The Count is late to his own ceremony. It’s interesting how Elmo, Abby, Grover, and Cookie are all heavily involved in the new footage, when they (with the minor exception of Elmo) are not as heavily featured in the existing street story. After the ceremony episode is over, we get one additional scene with The Count and those who nominated him, singing a fun new song, “Count on Me”.

When this DVD was first announced, I was hoping that it would be a spotlight DVD for The Count. After all, a DVD release of the best of the Count is long overdue, and I always thought this street story would make a good framing device for such a release. However, the video is not a spotlight video on The Count (I should have known that from the bonus features), instead being themed around number segments. There’s a montage of Count clips at the beginning, but besides that and the street story, the only complete Count von  Count segment is the “Number of the Day Song”, which plays during the end credits. 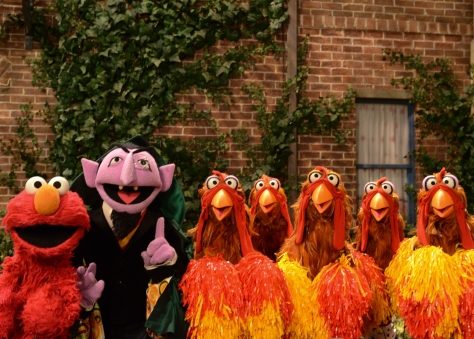 And the selection of inserts is one of the weakest things about this. For the most part, they’re all animated or live action film segments. Besides the mentioned clips with The Count, there is only one Muppet segment, in which a fish counts to eight. Many of the segments on this release also appear in Elmo’s Super Numbers, which was released just last year. Many of the segments are bland or forgettable. Of course it does have some segments not on that release, such as the remakes of “Martian Beauty” and “Pinball Number Count”, and some of the segments are kind of cool, but for the most part I wish there were better clips. Clips from the 1970s and 1980s, more Muppet clips, some additional clips with The Count, early recurring series like Numerosity, Jazz Numbers, and Mad Painter… Those would have made the release better.

And while all of the inserts have to do with counting, none of the bonus features do. I would have expected some features involving The Count, maybe some bonus clips starring the character, but instead we get Preschool is Cool: ABCs with Elmo, which is about the alphabet instead of numbers, and Elmo’s World: Friendship (if friendship is as much a theme as counting, then either of the other two videos in the Preschool is Cool series would have been a better choice). If I was in charge of this release, the bonus video would have been either Learning About Numbers, Count It Higher: Great Music Videos from Sesame Street, or Elmo Says Boo!  The DVD also comes with a  pop-up book, Elmo the Musical: Ahoy, Elmo!  For a video about The Count, there sure are a lot of Elmo-centric features.
But despite the disappointing selection of inserts and the odd choices of bonus features, this video is worth owning. The new footage is great, as is the featured street story, and the ending song is catchy.