Last night we were excited to see footage from the first episode of the new series ‘The Muppets’, starting September 22nd at 8/7c.  Featuring Hollywood stars and probably one liner cameos, we’re treated to Kermit insulting Tom Bergeron and Miss Piggy refusing to interview Elizabeth Banks.  Plus we see full-size Fozzie, a gorgeously dressed dancing Rizzo and Pepe, plus Bunsen electrocuting Beaker, similar to the pilot presentation.
Watch it right now, 10,000 times, below! 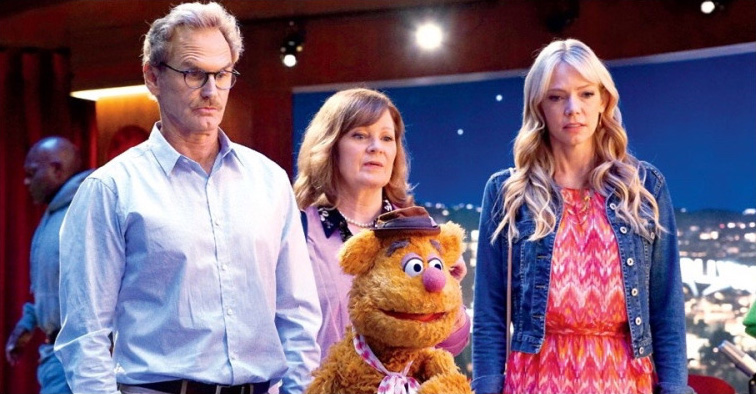 Meanwhile, we’ve also learnt that Fozzie’s girlfriend Becky, as seen in the pilot, has been recast for the series.  After originally being played by Margo Harshman, Becky will now be played by actress and comedian Riki Lindhome, who you might recognize as one half of the comedy music duo ‘Garfunkel and Oates’ alongside Kate Micucci, also starring in the TV series of the same name.  Riki also stars in the Comedy Central series Another Period, and has appeared in TV shows like Gilmore Girls, The Big Bang Theory and Adventure Time, as well as movies like Million Dollar Baby, Much Ado About Nothing and The Last House on the Left.  She’s a hilarious actress and comedian, and one whose timing and sensibilities fit perfectly in line with The Muppets.
Meagan Fay and Jere Burns reprise their roles from the pilot as Becky’s parents, now named Holly and Carl.