Our pal Michael Wermuth Jnr has been schooling us on the history of The Jim Henson Company and The Muppets.  Make sure to read Part 1, Part 2 and Part 3.

Michael Wermuth Jnr – Jim Henson died unexpectedly on May 16, 1990. Although he died young and unexpectedly, Henson had a bit of foresight. A few years earlier, he had written letters to his kids, instructing them not to read them until after he died. He actually wrote up instructions on what he wanted his memorial service to be like. And since Kermit was the most important Muppet, he had informed a few people of who he wanted to have take over the role, and that performer was Steve Whitmire

, who continues to perform Kermit to this day. However, for most of the decade, Kermit would typically take on supporting roles, with other characters taking the lead, particularly Gonzo and Rizzo the Rat, now a duo (and Rizzo now becoming one of the main characters, after a decade as a more minor character). In previous years, if a performer departed from the Muppets (and sometimes even if a performer was still active with the Muppets), their characters would usually be recast right away, but now, although Kermit was recast right away, most of Jim Henson’s other characters – as well as most of those performed by Richard Hunt, who died two years later – would remain silent for most of the decade.

Jim Henson’s children inherited the company, with Brian Henson becoming the company’s vice president. In a 2014 Tough Pigs interview, Henson Company historian Craig Shemin pointed out that in the ten years after Jim Henson died, the company produced a lot more hours of television than they did during Jim Henson’s life time. 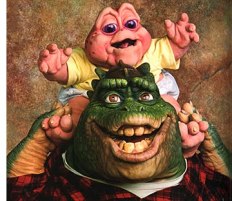 Among the shows that the company produced during this period included Mother Goose Stories, Dinosaurs, Dog City, Secret Life of Toys, Animal Show with Stinky and Jake, and The Wubbulous World of Dr. Seuss. Two of the companies most notable shows came out near the end of the decade, those being Bear in the Big Blue House, which was a big hit for the company during the years it was broadcast (it’s popularity on par with the Muppets and Sesame Street), and Farscape, which has gone on to be a cult classic with fans of science fiction.

The Muppets also came back to weekly television with Muppets Tonight. In many ways, this show was different from The Muppet Show (the MuppeTelevision portions of The Jim Henson Hour were also quite different), with Kermit serving as producer, giving hosting duties to Clifford. Unlike on The Muppet Show,

which didn’t have any humans except for the guest star, most episodes of Muppets Tonight featured appearances by other celebrities in addition to the guest star (some such celebrities were even the focus of a subplot). It was also common for musical numbers (and sometimes other sketches) to not be shown in full, often cutting to backstage before the numbers ended. Unfortunatley, the show only ran for two seasons (the first on ABC, the second on The Disney Channel), and until the end of production the writers couldn’t decide on the format – a variety show with backstage scenes, or a sitcom about making a show with on-stage material. This show did bring a few Muppet performers to prominence, most notably Bill Baretta, who had become one of the main performers at this time (having joined in 1991), and although he had performed in a lot of productions from the Creature Shop, Brian Henson now performed actively with the Muppets. Muppets Tonight also introduced a lot of new Muppet characters, including Johnny Fiama and Sal Minella, Bobo the Bear, and, most notably, Pepe the King Prawn, who would become one of the main characters after the show ended.

Jim Henson passed away before he could sign the contracts finalizing his intended sale of the company to Disney, and the Henson family decided not to sell. Although Disney did not get the company, Disney did help out Henson, distributing the series Dinosaurs as well as the next two Muppet films, 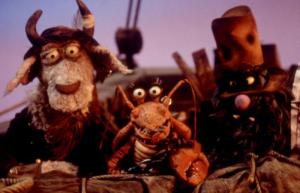 The Muppet Christmas Carol and Muppet Treasure Island, while The Disney Channel broadcasted reruns of Fraggle Rock (both the original and the animated series), in addition to several Sesame Street specials and all of Jim Henson’s films, and Disney’s Buena Vista Home Video got the video rights to the majority of the Henson Company library, releasing videos under the Jim Henson Video label. This was also a difference from before – back in the 1980s, the video rights to Jim Henson’s various productions were held by many different home video companies, but now almost all of them were held by one company. Disney wasn’t the only company making Jim Henson Company content available, though – Nickelodeon ran reruns of Muppet Babies, The Muppet Show, and many Muppet specials, and BMG Kidz formed the Jim Henson Records label. 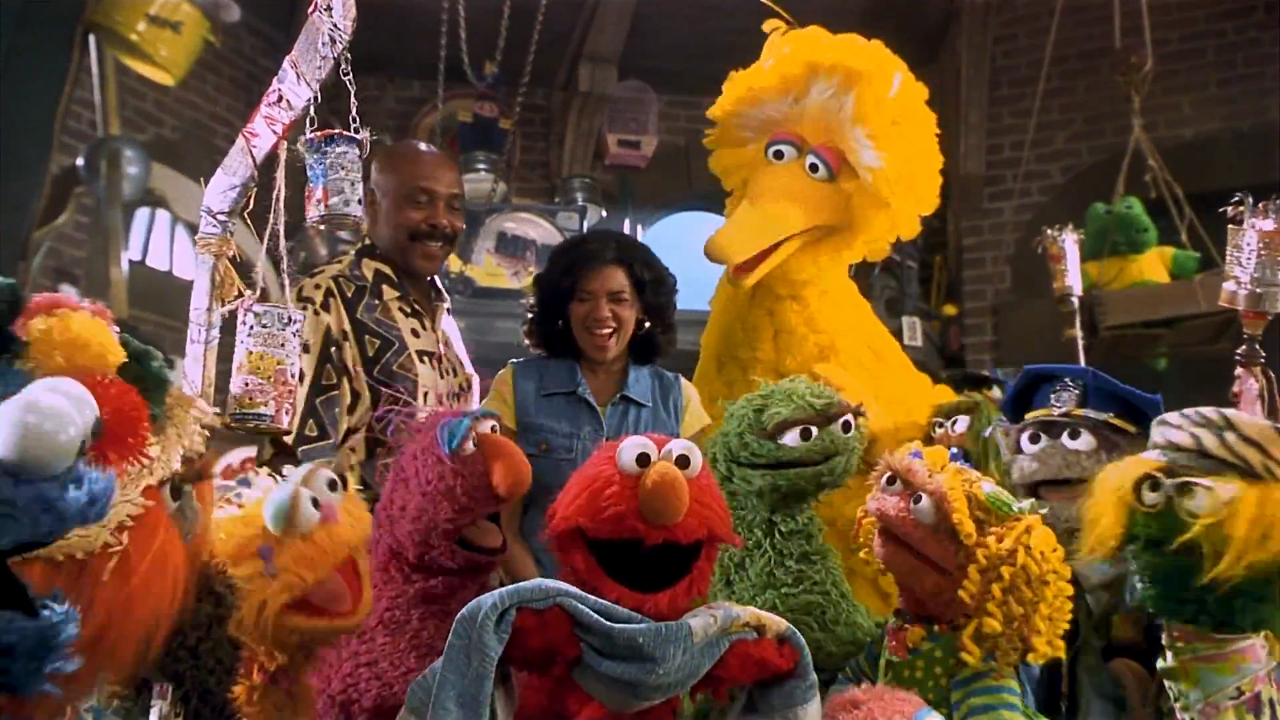 Around 1996, The Jim Henson Company started a deal with Sony. Forming Jim Henson Pictures, the agreement was for Columbia Pictures to distribute 10-15 films over a period of five years. Unfortunately, the movies that came out of this deal (Buddy, Muppets from Space, and The Adventures of Elmo in Grouchland) did so poorly at the box office that only three were made. Columbia Home Video also obtained the video rights to the Henson library (in addition to already owning the distribution rights to a handful of Henson films), releasing videos under the Jim Henson Home Entertainment label from 1998-2004. Sony also released a number of Muppet video games on its PlayStation and PlayStation 2 systems.

In 1999, The Jim Henson Company started producing shows broadcast outside of the United States, including Mopatops Shop and Construction Site. Also in 1999, Henson partnered with Hallmark to purchase and relaunch The Odyssey Channel (and also launched The Kermit Channel in Asia), airing the company’s back catalogue of productions as well as a handful of original Henson programming, includingDonna’s Day (which had already aired on PBS for a year, independent of Henson) and Telling Stories with Tommie dePaola. 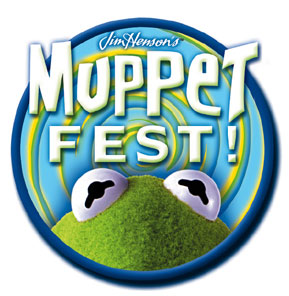 In 2001, The Jim Henson Company celebrated the 25th anniversary of The Muppet Show, most notably with Muppetfest, the first and only official Muppet fan convention, which concluded with The Muppet Show Live, a special one-time live performance of the show, allowing for the fans to see the puppeteers (as well as why the original show couldn’t have aired live). A surge in Muppet merchandise came out during this period, with perhaps the most notable Muppet merchandise of the period being the action figures from Palisades Toys. While the Muppets wouldn’t come back to the theaters for over a decade, the year 2002 brought not just one but two Muppet films, the made-for-video
Kermit’s Swamp Years and the made-for-television It’s a Very Merry Muppet Christmas Movie.

As mentioned earlier, after the passings of Jim Henson and Richard Hunt, only a handful of their characters were recast right away, with the majority of their characters either completely absent or given only non-speaking appearances in the background. 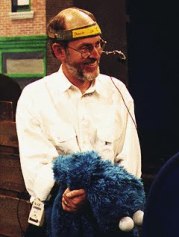 Frank Oz’s busy directing schedule also affected his involvement with the Muppets more and more, to the point that in some productions (such as Muppet Treasure Island and Muppets from Space), his involvement was mostly limited to just providing the voices of his characters, only spending a short amount of time on the sets. By the late-1990s, the company began to not only recast characters originated by Henson and Hunt, but also gave alternate performers to Frank Oz’s characters, to allow them to continue being used without working around Oz’s schedule. At first Oz was still the main performer of his characters, but now Eric Jacobson is the primary performer of his characters (with David Rudman performing Cookie Monster). Oz has not performed any of his Muppet characters since 2002, while he only spends one day a year (if at all) onSesame Street these days.

In 2000, the German media company EM.TV purchased The Jim Henson Company, but shortly afterwards experienced major financial issues, and spent four years trying to sell the company, while selling off a few of the companies assets, including its ownership of The Odyssey Channel (now called Hallmark Channel) and Kermit Channel, and ownership of the Sesame Street Muppets (though The Jim Henson Company continues to built the puppets and the characters continue to legally be called Muppets) to Sesame Workshop (formerly the Children’s Television Workshop). Although many major companies were reportedly interested in buying The Jim Henson Company, in the end it was the children of Jim Henson who bought back the company in 2003. A year later, The Jim Henson Company made a major decision, selling the rights to both The Muppets and Bear in the Big Blue House to The Walt Disney Company, while retaining the rest of its copyrights and remaining a separate company.

We’ll wrap up this article series next time with a look at what The Jim Henson Company has been up to since, as well as Disney’s handling of the Muppets.

One thought on “60 Years of Henson / Muppets History Part 4”