Jarrod Fairclough – One of my favorite things about ‘The Muppets’ is how they’ve been using some of the more obscure characters from the franchise.  Whether in the background or brought forward for a bigger role, it’s such a delight to see characters we haven’t seen in a long time in a prime time show!  With the series being a success, we’ve had an influx of visitors to this site, and not all of them may be aware of who these ‘people’ actually are! 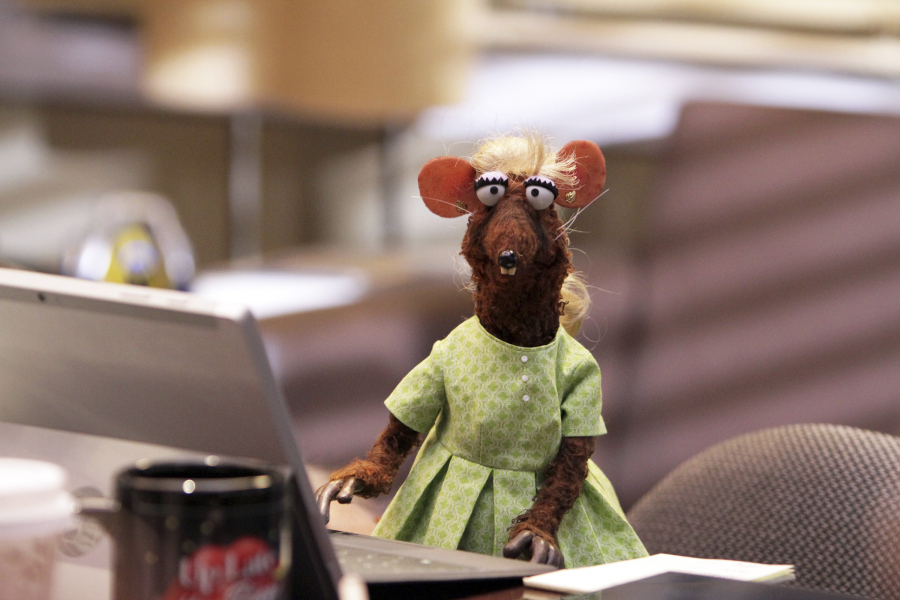 Yolanda Rat
Yolanda first appeared in the 1984 film The Muppets Take Manhattan as a friend of Rizzo, eventually becoming a waitress at Pete’s Luncheonette.  She’s often been used as a love interest of Rizzo, and will either reciprocate the feelings or shut them down as needed.
She appeared sporadically over the years in various specials.  She played the Head of Muppet Studios in the VCR game You’re the Director and a huckster in Muppet Classic Theatre.  Though not used in the group of cruising rats in Muppet Treasure Island, Yolanda returned in the web series The Muppets Kitchen with Cat Cora and in the 2011 film The Muppets.  She has been performed by Karen Prell, Camille Bonora, Alice Dinnean and is currently played by Julianne Buescher.

Chip
Chip originated in the 1989 series The Jim Henson Hour, working for the pirate broadcasting TV station ‘Gorilla Television’.  He was a big fan of the alien puppet character Alf, often wearing a pin stating ‘ALF FOR PRESIDENT’.  He made silent appearances in Muppets Tonight, Muppets From Space, It’s a Very Merry Muppet Christmas Movie and Muppets Wizard of Oz.  He was designed by Michael Frith as a caricature of then writer and now co-creator of The Muppets Bill Prady.  He was originally performed by Gord Robertson, and is now performed by Dave Goelz. 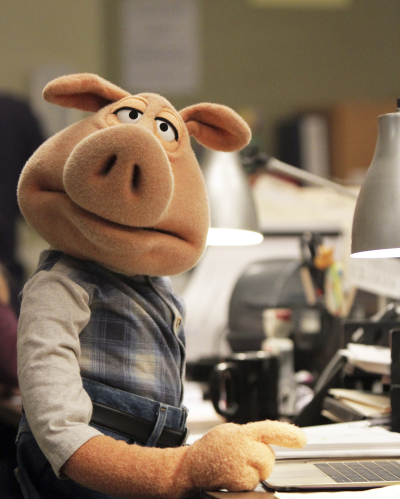 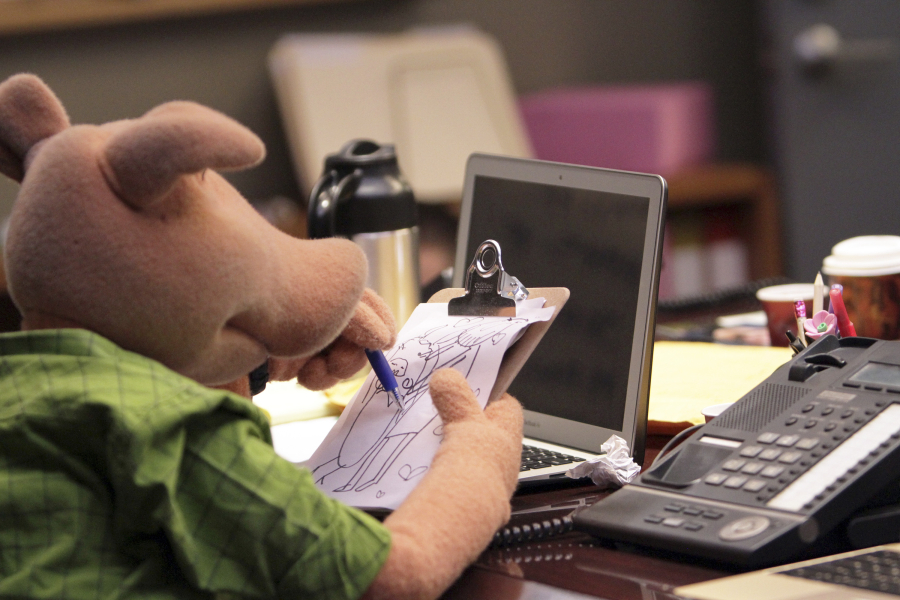 Andy and Randy Pig
Andy and Randy are twins and Miss Piggy’s dim witted nephews.  They originated in 1994’s Muppet Classic Theatre playing 2 of the 3 little pigs, and later appeared in Muppets Tonight, hired to be production assistants so that Miss Piggy would be on the show.  They were incompetent and clueless, often ruining the smallest of tasks.  They were the bane of John Goodman’s existence, after he saved their life.  They disappeared in the 2000’s, but appeared again The Muppets Kitchen with Cat Cora in leading roles.  They sang a single line in ‘We’re Doing A Sequel’ at the beginning of Muppets Most Wanted.  While they are yet to talk or really do anything in the new series, it’s assumed that they are the same characters, as they’re often seen together.

Angel Marie
Angel made his first appearance as a pirate in the 1996 film Muppet Treasure Island, where he was fearsome and tough.  He displayed a softer side during ‘Cabin Fever’ as he grabbed a ukulele and donned a fruit basket hat.  He later played a villainous Flying Monkey in The Muppets Wizard of Oz, and made a cameo in Muppets Most Wanted as the Gulag chef.  He’s been performed by John Kennedy and Bill Barretta, and is currently being performed by Peter Linz.

Gene
Originally named Behemoth, Gene debuted in Season 1 of The Muppet Show where he slams a pie in to the face of Sandy Duncan.  He is known to eat almost anyone, and in the past has chowed down on Pepe.  He disappeared in the 1980’s, later appearing in Muppets Tonight as the assistant and bodyguard of tycoon Ernst Stavros Grouper.  He surprisingly made several appearances in the promotions for the 2011 Muppet film, where he spoke a line, complimenting Jack Black’s teeth.  His named was changed to Gene by performer Bill Barretta as a reference to his brother.  He’s been performed by Richard Hunt, Dave Goelz, Jerry Nelson is currently performed by Bill Barretta.

Beautiful Day Monster
Though you may not know his name, Beautiful Day Monster is one of the longest running continually used characters in Muppet history, getting his name from a sketch where he ruins a little girl’s beautiful day.  Originated in 1966 for a snack commercial, he made appearances on The Ed Sullivan Show and was a regular fixture of Sesame Street in it’s early run, making him one of the rare characters who’s made appearances in both franchises.  In one appearance he was played by Frank Oz, and won a cookie.  It was this sketch that inspired the beloved Cookie Monster.  When Sesame Street decided to phase out some of it’s scarier monsters for those we know and love today, Beautiful Day Monster was put aside and later rebuilt for The Muppet Show.  He made numerous appearances during the series, including a sketch with Paul Williams where he inquires about the cheapest price to get to Pittsburgh. Not used much in the 1990’s, Beautiful Day Monster returned in ‘The Muppet Show Theme’ video by OK Go, and sang a line in the 2011 film.  He has been performed by almost every main Muppet performer, including Jim Henson, Frank Oz, Jerry Nelson and Caroll Spinney.  In his 2011 performance he was performed by Bill Barretta.

One thought on “Muppetology 101: Those ‘Obscure’ Characters in ‘The Muppets’”