Mitchell Stein-Being a Muppet fan is tough business. While The Muppets are a strong franchise with major brand recognition, it doesn’t quite match the security of Disney’s other multi-billion dollar franchises, namely Marvel and Star Wars. So the future of the franchise at hand can always hang in the balance of many frustrating factors. Being the nervous fan that I am, with every passing week of an airing of The Muppets I always get very excited to see that week’s episode of perfection, yet I dread waking up in the morning for the follow up television ratings. Did it meet the network’s expectations? What if it missed the margin by a few million?

The good news for paranoid fans like myself (and other forms of Muppet fans) is that ABC has just ordered three additional episodes of The Muppets. For those not keeping track, that brings our season one episode count to sixteen episodes! Wait…only three episodes? 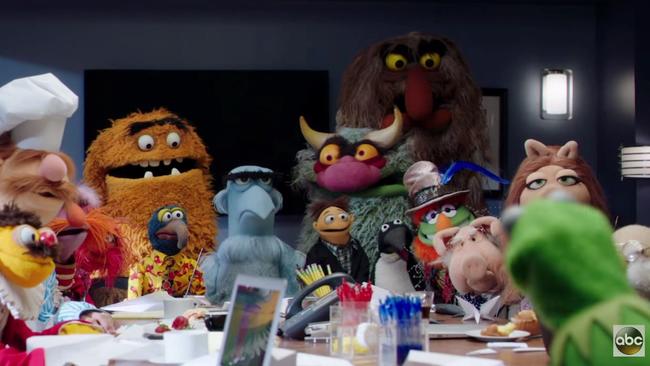 The weird thing about this announcement is the very strange and odd number ABC picked to order from the series. Around this time of year, standard successful comedies receive what they call in the television business “the back nine”. The standard procedure is that the network first picks up a series for a season, and if things are going smoothly for the show at hand, the network will order more episodes for the second half of the television season. If things are going rough, well…some shows are that lucky. So as standard comedies are generally twenty-two episodes seasons, it’s at around this point in the season in which the networks make the decision of ordering the final nine episodes (or the “back nine” as they call it) to finish up the season. Which puts the entire case of The Muppets into a strange perspective.

There could be multiple explanations as to why ABC is choosing such an odd and unexpected number. Sources like Deadline and The Hollywood Reporter both claim the reason of such an odd number is due to the ridiculous overload of ABC’s midseason series. As explained by network exec Paul Lee at the ABC Upfronts in May, The Muppets was intended to be seen as a “limited series” which in the television business generally means a thirteen-episode season- less than a standard full season- but with the possibility of more episodes. Taking that into account, it’s actually pretty exciting to see ABC confident and satisfied enough to put out three more episodes of the show. Unfortunately, the numbers for The Muppets have dropped due to backlash by some of the general audience of the new format and style, but seeing as how that “adult” edge has rubbed off and faded from the show, ratings remain steady and will hopefully bounce back up. The numbers aren’t awful by any means, but that could be reason as to why ABC feels a full 22 episode season could be a risk. However, it’s nice to see that the network is clearly confident enough in any more episodes, because had they felt the show is doomed they would just let the thirteen episode season run its course and show no more interest in producing any more.

Like these major media sources have stated, the main purpose of this seems that ABC’s midseason lineup is stuffed. The original plan, shared at the Upfronts, was that when the Muppets ended it’s limited run, Fresh off the Boat will move over to the Muppet’s 8PM slot and the new midseason comedy Real O’Neals will take Fresh‘s 8:30 slot.
Looking at the situation with that in mind, its actually quite good to see ABC has added a few additional episodes even if originally intended for a shorter season. What we can hope for as fans is that the ratings remain strong and steady or increase as it progresses to the end of the season to help make Season Two a possibility.

As far as I can honestly tell, no one can tell the true intentions of ABC at the moment. Regardless of their intentions, the wonderful thing is that it’s great to see additional episodes being added on to the series. It’s a great security knowing that straight off the bat we’ll be seeing sixteen episodes of The Muppets. That’s already more than Muppets Tonights’ entire ABC run! As far as the ratings remain steady or increase as the season progresses, in my own opinion we could breathe just a bit easier. The Muppets is still one of the season’s strongest performing shows (so long as it doesn’t drop within the upcoming weeks) and one of ABC’s leading comedies in the 18-49 age range.

Of course, you can help make a difference in the result of the show’s presence as well. By tweeting along with the show (#TheMuppets), watching it live and streaming it the next day on one of ABC’s affiliated official sites (ABC.com, Hulu.com) can make a big difference in the shows survival. The TV ratings game is fierce, and every view counts. Spread the word and help draw more attention to the series.

With all that being said, I think we can breathe a bit easier in the weeks to come. For one, we have sixteen guaranteed episodes coming our way, plus with our help we can make Season Two a reality. I think at this point regardless of the outcome we can kick back and enjoy the next ten episodes of perfection heading our way.

Oh yeah…there’s a new episode TONIGHT at 8/7c on ABC. Watch it!