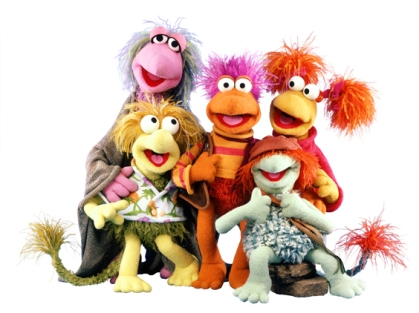 Michael Wermuth Jnr – Fraggle Rock is one of The Jim Henson Company’s three biggest shows, along with The Muppet Show and Sesame Street, made during Jim Henson’s lifetime. But it seems like it gets less attention than the other shows, both from The Jim Henson Company (at least before 2004) and by fans, though there is a fairly big fanbase. But why does it seem like, of the three big Henson franchises, it is the “lesser” of the three shows?

The two major crossovers between the three Henson franchises – The Muppets: A Celebration of 30 Years and A Muppet Family Chrismtas – feature less characters from Fraggle Rock, while the specials are dominated by Muppet characters with Sesame Street a big second. In the 30 Years special Traveling Matt and Sprocket are the only characters in attendance, while in A Muppet Family Christmas, Doc and Sprocket are there for most of the special, but the Fraggles only get one big scene and a cameo during the carol sing (at least Traveling Matt stays for the whole carol sing). To be fair, Matt, Sprocket, and Doc are the ones with the most experience in our world, with Matt and Sprocket being the ones to make guest appearances most frequently.

It also seems like Fraggle Rock has less characters. Granted, Sesame Street has been on the air longer, and the Muppets have had many productions and have added many new characters over the years. But what I mean is that Fraggle Rock seems to have less characters that casual fans know of. The Muppets and Sesame Street seem to have a lot more “main characters”, not to mention more supporting and minor characters that casual fans know about. With Fraggle Rock, there’s really only 14 major Muppet characters, and I don’t think casual fans (or people who never really watched the show much) know any of the more minor characters (with the possible exception of Cantus and Convincing John, but that could be due to the fact that Jim Henson performed them). It’s especially odd when both Sesame Street and The Muppet Show started out with a lot less performers, most of them being main performers when the show started, while Fraggle Rock started out with a large amount of additional background performers.

Part of it could be a case of longevity. Sesame Street has been on the air for 45 years (and  counting). The Muppet Show may have only lasted five seasons, but the Muppets from that show have lived on all these years since, appearing in multiple follow-up shows, movies, specials, books, and so on. 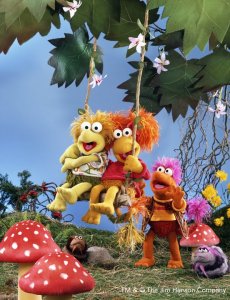 But Fraggle, Sesame Street and the Muppets have had scores of television specials, the characters have made a lot more guest appearances on various shows, there have been loads of viral videos with the characters, lots of storybooks and comic books were made, and the two franchises have had their own movies, while fans are still awaiting the long-awaited Fraggle Rock movie, there haven’t really been any Fraggle Rock specials (though Henson.com used to have “The Bells of Fraggle Rock” listed as a special, but I consider that a regular episode), and there have been less books of the series. There have also been a lot more compilation videos for Sesame Street and The Muppet Show, while Fraggle Rock has only had two, both music-themed, though to be fair, Sesame Street and The Muppet Show lend themselves better to compilation videos. I can’t really think of too many ways there could be non-music-themed Fraggle compilations (though a video compiling the best of Traveling Matt’s adventures in Outer Space would be awesome). There was Fraggle Songs: Volume 1, too bad there weren’t more volumes, and there was Doozer Music, too bad there wasn’t a Gorgs-themed video. As far as other Fraggle Rock productions go, all we really got were an animated series and the current Doozers spin-off series.

It could also be a case of where it was originally broadcast. Fraggle Rock originally aired on HBO, at a time when many households didn’t have basic cable, let alone channels you’d have to pay extra for. In fact, Karen Prell stated in a Muppet Central interview that, because of this, there wasn’t much Fraggle Rock merchandise until the show was ending it’s run. Meanwhile, Sesame Street has always aired on PBS (though new episodes will now premiere on HBO), while The Muppet Show ran in first-run syndication. More people were able to watch those when they were new. Fraggle Rock has also been rerun on channels that many didn’t have. In the 1990s, it was rerun on The Disney Channel, back when it was a premium channel. It was later rerun on The Odyssey Channel, a basic cable channel that many cable providers didn’t carry. It’s also been rerun on The Hub, though I don’t know how accessible that channel’s been. Reruns were also shown on TNT from 1988-1992, at a time when more people were getting cable.

Of course, Fraggle Rock has not entirely gotten the short end of the stick compared to the Muppets and Sesame Street. After all, every episode is available on DVD (and have had a few rereleases) as well as digitally and for streaming, while Sesame Street has too many episodes for the whole show to be released and The Muppet Show is still awaiting its fourth season’s DVD release, and both shows have various clearances required for video releases, while Fraggle Rock doesn’t have anything that needs to be cleared. And after The Jim Henson Company sold off the Muppets in 2004, Fraggle Rock has been among the Henson productions to get the most attention from the company.

3 thoughts on “Why Does Fraggle Rock Get Less Attention?”