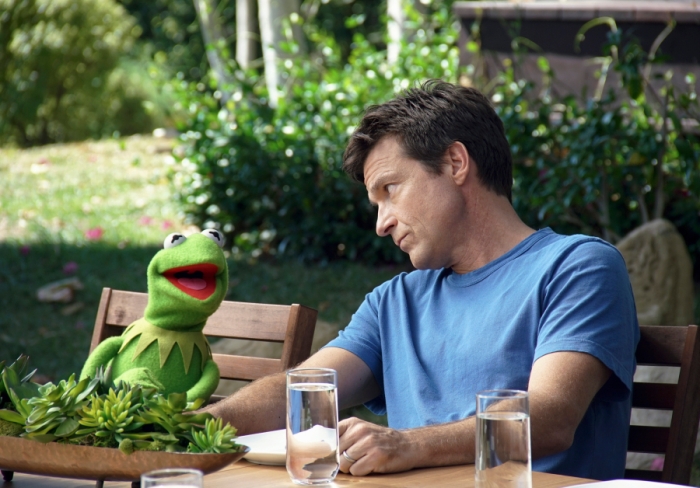 I think it’s safe to say that we’ve finally seen The Muppets find it’s proper footing in primetime TV. In my own personal opinion, it’s pretty much everything I would want from a contemporary Muppet television show in 2015. After much trouble, the writers and crew have learned to blend the characters and madcap humor with the mockumentary style format, and serves up some wonderful nostalgia to wrap it all together.

This week finds a stressed-out Kermit taking a day off to kick back and relax and learn to control his stress at an upstate private Yoga retreat. While he’s away, he puts Scooter in charge of running the daily show operations. This being the Muppets, mayhem obviously ensues causing for hilarious distress from the cast and crew of Up Late with Miss Piggy. It’s a nice return to the silly elements that the show previously lacked and certainly ensures me of any doubts or concerns about the characterization of the cast that I had.

Removing Kermit from the Muppet troupe, only to ensure mayhem in his absence is a story we’ve seen before multiple times, yet its a subplot that’s welcome within this episode. In a show in the process of finding itself, its always nice to see the gang realize how much they depend on Kermit and the other way around. In a show that’s been criticized about the characters being “too mean” towards each other, it is nice to see them that heart of the characters have such a big part in the show. 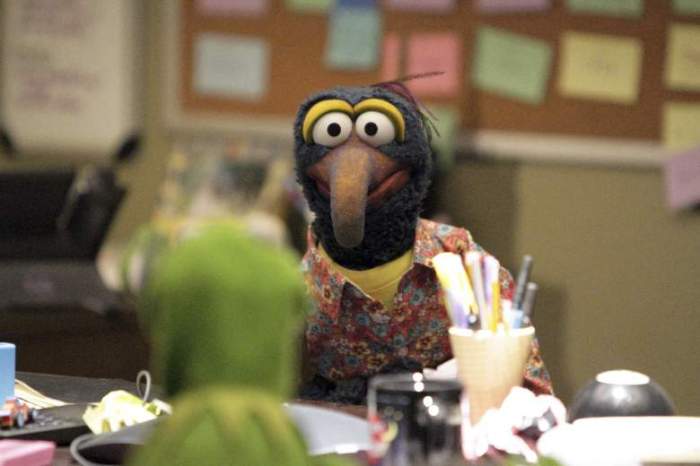 That caring also allowed Gonzo to get a chance in the spotlight for the first time this season. With Pepe and Rizzo stealing the spotlight, Gonzo seemed to have been demoted to a much duller version of his personality. I’m hoping with time we’ll have a bit more room for that madcap daredevil once more.

Back in episode four, I wasn’t too thrilled about the weird Sam Eagle and Janice plotline. It felt out of place, and just not really anything too particularly funny or original. However, this episode plays with this subplot to it’s advantage. Its still just an odd fit and slightly out of place for Sam, that subplot worked wonderfully within this week’s episode. I loved watching Sam with his ridiculous failed attempts at winning Janice over. Although, I’d say it’s a plot bound to grow stale really quick, but in this episode itself, it was simple yet hilarious.

Scooter returns as the show’s breakout character yet again. I absolutely adore what David Rudman has been doing with the character, and I don’t think I’ve enjoyed him Scooter this much since The Muppet Show. However, I hope his weird unhealthy relationship with his mom doesn’t cause a bad case of Flanderization for his character. I wouldn’t want Scooter’s character turning into a full blown Mamas Boy, but still I’m having a really fun time watching Scooter steal the show every week. Who would have predicted this?

Moving on to the weekly guest star aspect of the show, I think Jason Bateman delivered his part well, his character was just a bit annoyance, but did call for some great comedy. Also we were treated to an unexpected appearance by Penatonix which is apparently is a big deal that kids are into these days. I wasn’t aware of this group until tonight’s episode, but it was certainly a very welcome surprising appearance. 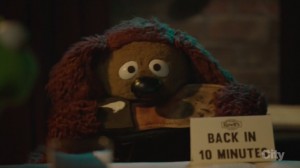 Of course I couldn’t possibly not mention how amazing it was to see that fantastic interaction between Rowlf and Kermit, which I’m guessing was intended to mirror the iconic scene from The Muppet Movie. Rowlf may not have had the opportunity for a lot of chance to shine in this series, but his short appearance is this week will definitely be a memorable one.

Wrapping up our episode, we are being served a wonderful dish of nostalgia as Kermit recreates the gorgeous magic of The Muppet Movie as he strums his banjo to the tube of Rainbow Connection. As a long time fan, it reminds me of a simpler time for the Muppets and perhaps an indication of what the show will attempt to accomplish moving forward. That being said, if this episode of creative contemporary comedy and a blend of nostalgia is any indication of the future of the show, we are in for quite a treat.