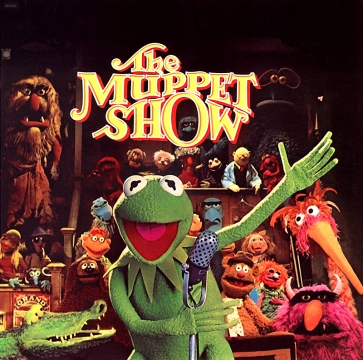 Jarrod Fairclough – In 1977, The Muppet Show was a huge hit.  It had run for a season, and was on it’s way to becoming the worlds most popular series.  In a show filled with music and comedy, it only made sense that they would release a soundtrack, so The Jim Henson Company and Arista Records got together to produce The Muppet Show Album.  And we thought we’d review it, track by track.  But with 21 tracks, we’ve decided to split it in to 2…

1 – The Muppet Show Theme
The most recognizable theme songs of all time would have to be The Muppet Show, and here we’re treated to an early version of it.  It includes Fozzie doing one of his comedy pieces, a staple in the first season that was eventually phased out.  Kermit then introduces the one and only original genuine no money back guaranteed Muppet Show cast album.  The song would remain relatively the same over the years, with lines from Statler and Waldorf, and the classic ‘Why don’t you get things started’.  Personally, I think they were better than this original one, but it’s still a classic.
Kermit then introduces the album and the next track.

2 – Mississippi Mud
This track always tricks me.  See, I own this album on vinyl, and that’s where I listen to it, including for this review.  But the song is fast and higher pitched than the others, so I always think I’ve got the record player settings wrong.  Sung by The Gogolala Jubilee Jugband, you can really hear Jerry Nelson and Richard Hunt.  Surprisingly, the mixture of their voices sounds a little like Steve Whitmire, but of course he wouldn’t be a cast member for another couple of years.

Do I really need to review this song?  It’s one of The Muppets most popular songs, still greatly used today in a number of ways.  It’s made a star out of Mahna Mahna and the Snowths, and while they may not be recognizable by name, many people would be able to tell you exactly what they’re from when they see them.

4 – The Great Gonzo Eats A Rubber Tyre To The Flight Of The Bumblebee
This is a sketch that doesn’t quite work on a record.  Gonzo’s shtick is always a visual treat, so to hear him eat a tyre isn’t as exciting to see it, which is the case on the show.  Still, the music itself is great to listen to, and the whole orchestral band behind the Muppets don’t get the recognition they so rightly deserve. 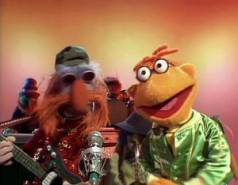 Scooter and Floyd team up here to sing a little ditty about being a fan of the bass player.  Scooter and The Electric Mayhem were paired together a few times throughout the run, even having Scooter as the bands manager in The Muppet Movie.  I wonder if they were planning to continue that, or if it’s something we’ll see return in the new series.  Richard and Jerry really sound great together, and you can hear the chemistry that made these two work in so many great pairings.

6 – Cottleston Pie
One of Jim Henson’s favorite songs since he was young was Cottleston Pie, and it was one of the only he could comfortably play on piano.  Rowlf does a lovely rendition here, and it’s such a Muppety song, too.  He includes an introduction, which is recycled from the couple of times he had sung this song on different variety shows between The Jimmy Dean Show and The Muppet Show.

7 – The Amazing Marvin Suggs & His Muppaphones

Here Marvin and his Muppaphones play Lady of Spain.  It’s another piece that loses something without the visual appeal, and while it’s implied that they’re being beaten, the visual adds a lot to the piece.  But it’s still funny. In fact, Marvin is my brother-in-law’s favorite.

8 – Pachalafaka (International Releases Only)
This is the first song on the album sung by a one-time character.  Jim Henson plays a tourist in Turkey, who sings about the delights of the country, and the beautiful girl (who has a mustache) who whispers ‘pachalafaka’ to him. Unfortunately he has no idea what it means.  It seems to be a made up word, although there was some discussion on the Muppet Central forums way back in 2002 that it could mean ‘transvestite’. 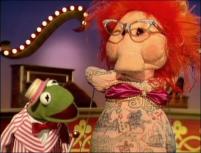 The only reason I prefer the video of this song is to see the various drawings that Jim drew on the Lydia puppet.  This is another one of those songs that is such a Muppet classic, and one of Jim’s favorites, so much so that it was one of the songs sung during his memorial service, by Kevin Clash as Elmo.

10 – Halfway Down The Stairs
This is another classic Muppet song, sung incredibly sweetly by Jerry Nelson as Robin.  It showcases that amazing voice that Jerry had, and in beautiful in its simplicity.  It’s easy to see why it’s so loved.

Check back soon for Part 2 of our review of The Muppet Show Album! 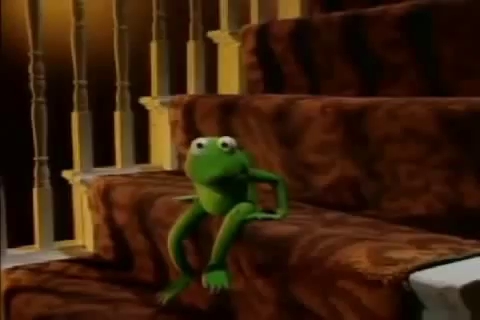