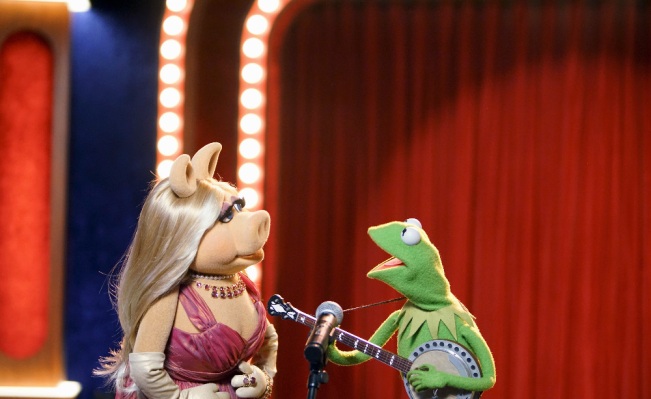 Jarrod Fairclough – After close to 2 months on hiatus, The Muppets returned last night, with audiences getting their first look at the new ‘retooled’ series under show runner Kristen Newman.  Since the announcement of the ‘reboot’, there was tonnes of speculation online about what exactly this would entail.  Some assumed it would revert back to The Muppet Show, while others went a little crazy and claimed it was going to be exactly like The Tonight Show with Jimmy Fallon.  Well, finally these crazy ideas can be put to rest, because the changes weren’t nearly as drastic as everyone thought they’d be.  And they worked.

The episode is pretty much one huge meta look at the reactions to the first 10 episodes of the series.  When the gang return from hiatus, they’re told the show just isn’t working, and a new Branding guru is brought in.  Of course he wants to make huge changes to the show, including firing Fozzie and airing the show live so people can tweet along. The gang rallies together in order to prove him wrong and show that if anything, Up Late needs a few more elements that made The Muppets great back in the day.
Of course this whole thing is a thinly veiled response to the critical reception the show received, especially in its first few episodes.  So, just as Kermit and Miss Piggy start putting all their friends on stage, Kristen Newman starts putting all our friends on the screen.

One of the main points of issue with the show has been the fact that Miss Piggy has often been pretty obnoxious.  I mean, of course she’s ALWAYS been obnoxious, but that softer side that we used to see barely reared its head in the first 10 episodes.  Newman has stated a few times that this was one of her first priorities, and Episode 11 doesn’t shy away from it.  Miss Piggy returns from a trip in Argentina revitalized and ready to get back to work. To show the beginnings of her softer side, she’s adopted a little penguin named Gloria Estefan, and she’s much more accepting of Kermit’s personal life without her. When he announces that he will be leaving to prepare for a 5k run with Denise, the previous Piggy might have snapped a little or made fun of his new girlfriend.  Not this time, as Piggy says that it’s a great idea to have boundaries and its great that he’s doing stuff for charity. As much as she might have karate chopped him over the years, there’s a reason that they dated for so long, and its nice to see that friendship explored in a way we haven’t seen for a long time.

Which brings me to the Kermit/Piggy/Denise triangle that has been a part of the show since the beginning, but really came to a head in Single All The Way.  Piggy and Kermit were always going to get back together.  It’s what they do.  So when Denise was introduced and the internet threw their arms up (when they weren’t comparing her to actress Natalie Dormer) we Muppet fans knew that it would only ever be a temporary thing.  It seems that Denise finally accepted this, and she told Kermit she wanted to take a break.  It’s a wise decision from the writers, Denise was never really formed in to a full character, and audiences weren’t warming to her as the network hoped they might.  While I’m sure she’ll still be around in future episodes, it will likely be more in her professional role in the Marketing department than as Kermit’s girlfriend.  It will be interesting to see her dynamic with him now that the relationship is over, and whether she’ll be able to put her feelings aside. 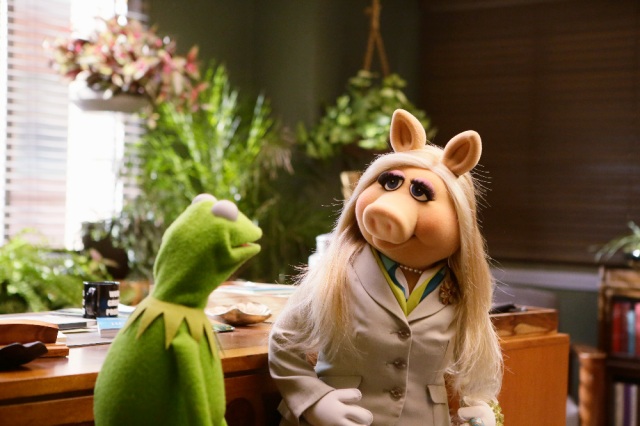 Kermit and Miss Piggy work.  For all their relationship flaws, they work.  They have a huge amount of respect for each other, and a real affection between them.  It’s a testament to Steve Whitmire and Eric Jacobson that it can be seen without them even saying anything, as evident in the look they give each other at the end of their musical number.  They have chemistry, and its nice to see it put to work in such a sweet way.  Now that Kermit is single, the spark between them will only glow brighter, and I suspect we’ll see that continue over the next 5 episodes.

Another change Kristen Newman wanted to make was have the Muppets be Muppets again!  While the show is still about their personal lives, Newman wanted the audiences to see just glimpses of what makes The Muppets themselves.  And so Up Late becomes a little more Muppety, with segments from Pepe, Bobo and a duet between Kermit and Miss Piggy.  Pepe’s ‘Uber Driver’ spot was a highlight, and it’s always fun to watch Bill Barretta go crazy with the prawn on his arm.  Bobo’s dramatic reading from The Real Housewives of Atlanta was great, with Bobo’s gruff voice and calm demeanor contrasting the ridiculousness of NeNe Leakes’ (whoever that is) description of a rental home.  The whole piece felt very reminiscent of a bit David Letterman used to do, called ‘Pat and Kenny Read Oprah Transcripts’.  Then there was the musical number, with Kermit and Piggy singing the John Prine number ‘In Spite Of Ourselves’.  I’m sure it’s a moment that will go down in the show’s history as one of the sweetest, as it was the biggest sign of a spark between the two exes in the series so far.  And honestly, it’s just nice to hear them sing together again.  It’s been a while.  And of course, I can’t go on without mentioning the lovely moment where the cast scat the theme from The Muppet Show.  I was there when they filmed the piece, and you can read more about that tomorrow! 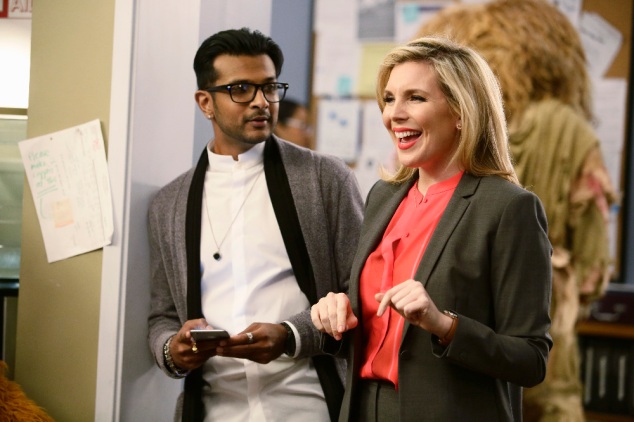 Last night we were introduced to two new human characters, Network Head Lucy Royce and Branding Expert Pache (or is it Pizza?) played by June Diane Raphael and Utkarsh Ambudkar respectively.  June is a great comedic actress, having done guest appearances on shows like Parks and Recreation and New Girl.  She plays the ‘little too sweet’ Lucy extremely well, and I’m guessing we’ll be seeing more of her as the show continues (She also appears in next week’s episode).  I’m not sure how necessary Pache will be as the show moves forward, the character may have already used up his shtick, but I’m sure guest appearances every so often won’t hurt.  Either way, Utkarsh is a great foil in the episode, and I’m a little scared of him.

Speaking of guest stars, Swine Song utilized comedy duo Key and Peele.  Truthfully I was never a huge fan of their show so I was surprised at just how much i enjoyed their guest spot.  If this is the way guests are going to be used in the future, I think it’s a step in the right direction.  So far this show hasn’t always known how to work in a guest (for every Lawrence Fishburne there’s a Nick Offerman) but this was a promising look.

So is the show perfect now that the retool has been put in to effect?  For some, yes.  For others, no.  Let’s face it, a large percentage of the audience really just wants the Muppets to sing old time vaudeville songs with silly sketches between them.  That’s not going to happen, and frankly in this day and age it just wouldn’t work.  But for now this is the series we’re getting, like it or not, but personally I love it, and think it’s a lot of fun.

Just a reminder to come back tomorrow as I recount my two days on set as they filmed this episode!