Michael Wermuth Jnr – Over the years, there have been many Muppet and Henson productions on home video, and today, class, we’ll take a look at the many video deals. Today’s class won’t be including Sesame Street videos (that’s a whole ‘nother lesson) or international releases. Let’s begin!

During the 1980s, various Henson properties were split up when it came to who held the video rights. Muppet Home Video released some of the specials and a couple of Fraggle Rock releases, CBS/FOX released the first three Muppet movies on video, Playhouse Video (which was the children’s division of CBS/FOX) released a series of Muppet Show compilation videos under its “Jim Henson’s Muppet Video” banner, HBO released several episodes of Fraggle Rock, Kids Klassics released the Muppet Babies Video Storybook series, InteractiVision released a couple of Muppet VHS games and Lorimar Home Video released the Jim Henson’s Play-Along Video series. 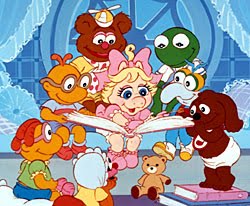 It wasn’t until after Jim Henson died that the majority of home video releases of his company’s productions would be released by the same company, though some productions would still be released by others (mainly those that the company didn’t own the distribution rights to). From 1992-1997, Buena Vista Home Video launched the Jim Henson Video label, which brought us two new Muppet Show compilations under the It’s the Muppets! Title, the direct-to-video Muppet Classic Theater and Muppet Sing-Alongs video series, several episodes of Fraggle Rock and Muppet Babies, and some of the movies and specials. In 1994, Buena Vista launched the Jim Henson’s Preschool Collection, which included the Muppet Babies “Yes, I Can” series (with new live-action introductions by Kermit and Robin) and episodes of Mother Goose Stories. Meanwhile, Walt Disney Home Video released episodes of Dinosaurs on video.

Following the end of the Jim Henson Video line, Columbia Home Video picked up the video rights and launched Jim Henson Home Entertainment. The line heavily focused on Bear in the Big Blue House and, to a lesser extent, The Wubbulous World of Dr. Seuss, but also released the original Muppet trilogy, The Dark Crystal, Labyrinth, and the Jim Henson Pictures releases (though Buddy was already released by Columbia Home Video before the label was launched), episodes of The StoryTeller and The StoryTeller: Greek Myths, and some of the Christmas specials. Near the end of Columbia’s contract, the company released the direct-to-video movie Kermit’s Swamp Years, as well as retail releases of some of The Best of the Muppet Show videos and DVDs that were already available from Time-Life, and even released the rarely-seen special John Denver and the Muppets: Rocky Mountain Holiday. While most of Henson’s distribution deals with video companies lasted five years, the deal with Columbia actually lasted eight, from 1998-2004, ending the year that Disney got the rights to the Muppets and Bear in the Big Blue House.

Following the Disney sale, Muppet and Bear in the Big Blue House videos have primarily been under the control of Walt Disney Home Video and Buena Vista Home Entertainment, which rereleased nearly all of the existing Bear in the Big Blue House DVDs in addition to all the Muppet movies Disney has the rights to as well as the first three seasons of The Muppet Show (and one existing special as a bonus feature per boxed set). Unfortunately, new releases have been a bit sluggish. Many Muppet releases came out in 2005, and Disney put out all of its theatrical Muppet films on Blu-ray between 2012 and 2014 (with Sony putting out the first Muppet Blu-ray releases in 2011), but there’s still a lot of content left unreleased. Fans have been waiting since 2008 for the fourth season of The Muppet Show (the show in general requires a lot of music clearances), and even the recent sitcom The Muppets has yet to have an official announcement for a DVD or Blu-ray release (though the show is available on iTunes).

Meanwhile, the remaining Henson properties were more-or-less split up on home video. Sony continues to hold the rights to the films it always owned the distribution rights to, but has also kept the home video rights to The Dark Crystal and The StoryTeller series’. The Jim Henson Company has otherwise limited it’s video deals to its library of family programming, including Fraggle Rock, Emmet Otter’s Jug-Band Christmas, and other shows. The first post-Sony video deal was held by Hit! Entertainment, who continued to release videos under the Jim Henson Home Entertainment label, though that label isn’t as prominent on the packaging. Among the releases were the first-ever Fraggle Rock DVDs, at first single-disc releases of three episodes (two episodes on the VHS versions), with a bonus unlockable episode if you pass a trivia game feature. Fraggle Rock then became the first series to have complete season sets from Hit!, then it became the first series where Hit! Released a complete series set – unfortunately, this happened before the last season as available on its own. 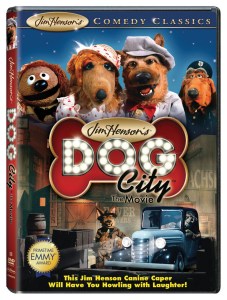 In 2009, LionsGate took over the video rights, rereleasing the Fraggle Rock complete series and individual season sets (and finally releasing the last season on its own), but also released the complete animated Fraggle Rock as well the home video debuts of a few specials on DVD, including Song of the Cloud Forrest, Dog City, Sesame Street: 20 and Still Counting, and Henson’s Place. While post-2004 DVD releases of Emmet Otter’s Jug-Band Christmas and The Christmas Toy had to remove scenes with Kermit the Frog, scenes with Disney-owned Muppet characters remained on these releases. Since 2013, the Henson video rights have been held by Gaiam Vivendi Entertainment.