1. What is your favorite Sesame Street sketch, and why?
Big Bird learns about the death of Mr. Hooper.  Do I remember seeing this episode on its original airdate?  No.  Did I?  I don’t know.  I would’ve been 4 years old at the time.  But when I eventually became acquainted with it, it always stayed with me.  So powerful, full of raw emotion from Will Lee’s close friends and cast members.  How they got through it, I don’t know.  What other childrens’ show would’ve had the guts to pull this off?  Instead of running from the issue, they faced it head-on and used it as an opportunity to teach children about death and loss with a beautifully written scene that never talks down to them once.  It’s the Sesame Street way and television at its finest. 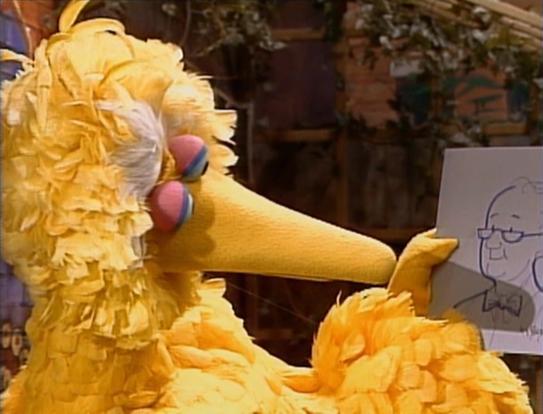 2. What is your favorite Muppet Show sketch, and why?
Harry Belafonte – Banana Boat Song.  Great, catchy song, and Frank Oz’s comedic timing as Fozzie is spot-on, especially later in the sketch when he is trying to accompany Belafonte as one of his backup singers.

3. Who is your favorite character (from any franchise) and why?
Probably Kermit.  He’s the one who started it all, and I find he’s my spirit animal in some ways.  We can both get crazy from time to time, but it often also feels like we’re the lone sane voice in a sea of insanity.

4. Who is your least favorite character (from any franchise) and why?
I don’t appreciate the fact that Elmo changed the demographic of Sesame Street to that of an even younger one.  And as a nostalgic, I don’t like the fact that Elmo dominates the programming and has pushed to the sidelines all the other great characters who made the show what it was.  There’s room for everyone on the Street, and Elmo certainly has his place, but let’s not go overboard.  If kids think Sesame Street begins and ends with Elmo and can’t pick Grover out of a police lineup, that’s a problem.

5. What is your least favorite production (from any franchise) and why?
I tend to avoid the productions that have really bad word of mouth in Muppet circles, but I did try watching “Muppet Wizard of Oz” once out of sheer morbid curiosity and didn’t get it.  It was a weird choice and I could see why people weren’t fans.  I should also add that while it does have its merits, watching “The Muppets Take Manhattan” as an adult, it doesn’t hold up nearly as well as I remember.  The storyline doesn’t make a lot of sense and it’s hard for me to wrap my head around that and really enjoy it as I once did.

6.  What’s your favorite song from any Muppet movie, and why?

“Rainbow Connection”.  It’s still “the” iconic Muppet song – so catchy, feel-good and inspirational.  Seems like it was pretty much Jim Henson’s philosophy in a nutshell. 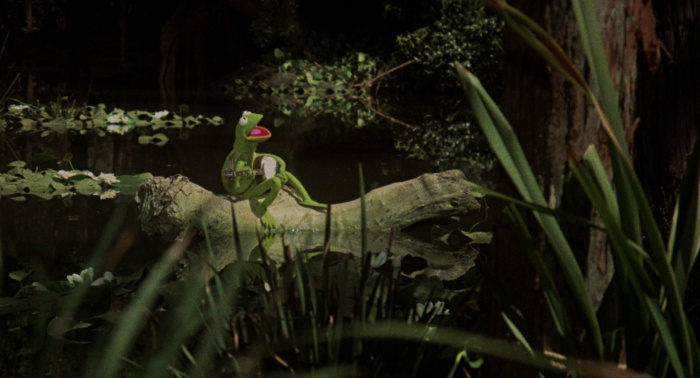 7.  Who is your favorite Muppet performer, and why?
Jim Henson.  So versatile.  He could play it funny, straight, whatever the situation required.  For a guy who considered puppetry to be a way to hide from the outside world, he sure found his voice through it, didn’t he?

8.  What is your favorite post-1990 Muppet production, and why?
“The Muppets” (2011).  It seemed like the Muppets were destined to fade into obscurity until Jason Segel saved them.  This movie reintroduced them to the world, reminded us why we loved them and made them popular again.  For that, I will be forever grateful.

9. What is your favorite bit of Muppet merchandise (you don’t necessarily have to own it)?
Probably this:

It’s the fan letter briefly seen in Kermit’s office in the 2011 movie, more prominently displayed on his desk in the set recreation at the El Capitan theatre during the film’s premiere:

Yes, Kermit is a fictional character, but he’s very real to me and was a big part of my childhood.  Owning something that resided on his desk is pretty cool.  This letter sums up why we all need Kermit, and I’d like to think that if he was real and had a desk, he would indeed have something like this on it.

10. You get to spend a day on Sesame Street.  What do you do?
Been a while since I was acquainted with the Street – does it still look the same?  Assuming all the iconic places like Hooper’s Store and Big Bird’s nest are still there, of course I’m visiting them all.  And if I could weasel my way into a scene, I would die a happy man.

11. Which is better – The Muppets (2011) or Muppets Most Wanted (2014) and why?
“The Muppets” for me.  They went back to basics and created something that really feels like it fits in the canon with a storyline that pretty much parallels their real-life resurgence.  Jason Segel’s love for them shines through, and I can relate to fanboy Walter carrying a torch for them while the rest of the world has given up on them.  But with that being said, I don’t dislike MMW.  It has its moments and the same kind of self-referential humor I love, along with some inspired human performances by the likes of Ty Burrell.  And I loved the Constantine character.  It had a lot going for it too and didn’t disappoint me as a follow-up, so I don’t know why it failed to connect with audiences.  Not enough Kermit?

12. Pitch a Muppet movie in no more than 140 characters.
It’s back to school for the gang at Muppet University.  Can they make the grade?

13. What’s the name of that song?
Tit Willow

14. Be honest: How many times have you had to tell your friends he isn’t the Veggie Monster now?
Not very often.  I remember my disgust when I first heard about that.  I get why they would want to do that, but as a non veggie fan with a pronounced sweet tooth, which side of the debate do you think I’m gonna fall on?  Sure we should all eat our veggies, but nobody should get excited about them.  Cookie Monster is all about excitement and instant gratification.  I understand him.  I get him.  Veggie Monster just sounds like a monster, period.

15. If you got to interview one Muppet/Sesame Street character, who would you pick, and what would you ask?
As someone who works for an understaffed company in a bad economy, I would interview Kermit and ask him how he does it.  How does he not unravel when things just seem to be falling apart around him?  And what was it like working with Jim?  Was he very hands-on?