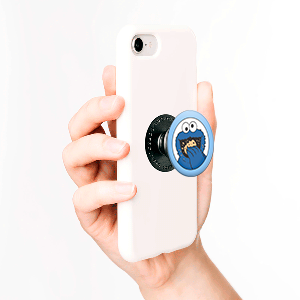 Cookie Monster’s Pop Socket
Old googly eyes himself Cookie Monster is getting his own phone PopSocket, one of those things you buy to help you hold your phone which seems like a great idea but I never think to buy one because where do you even buy them and how annoying will it be in my pocket I mean I know it pops in and out but the question is how thick is it unpopped and also how long is too long for a run on sentence?

Well, the good folks at PopSockets.com have released a PopSocket over on their website, and in great news, 50% of all proceeds will be going to the Yellow Feather Fund, Sesame Workshop’s tremendous charity.

Henson Are Making A Teddy Ruxpin Series
Even while making films with dirty words, The Jim Henson Company are still in the business of family entertainment, and have announced that they’re working on a new series centered on the old 1980’s talking toy Teddy Ruxpin.  The series will be made via digital puppetry (think Sid The Science Kid or even Waldo from MuppetVision*3D), and the showrunner is the extremely talented John Tartaglia!  That guy nails whatever he touches, so we’re sure this show will be no different.

Floyd Want You To Get A Credit Card
The Muppets are in the process of taking England little by little before their big show at the O2 in a couple of months, and part of that means they’re working with British bank Barclay to promote their credit cards.  It’s a cute little ad starring Floyd, with a few fun appearances from the rest of the gang.  It’s caused a little bit of a stink in some comment sections to see The Muppets selling stuff, but let’s remember that not only did Jim Henson get his start in advertisments, he even did an ad selling a credit card!