Mitchell Stein – Greetings, Muppet fans (and others…)! Today, we’re taking a look at one of the most complex topics to baffle humanity through the ages. A topic so complex, that even the world’s greatest minds have difficulties comprehending: Muppet canon. Of course, official canon is at the forefront of every major franchise these days, so much to the point that canon can be determined and withdrawn at any point, even leading to an entire team at Lucasfilm just to determine what is Star Wars canon.  While the intricacies of many franchises leave fans with much to speculate, there are few properties that have more timeline complications than The Muppets. It’s always difficult to determine what the actual canonical structure of these characters are, or where reality and fantasy begin–it’s almost as if each Muppet film is its own version of Inception. However, today, we attempt the unthinkable, and attempt to understand the deeper complexities of the universe inhabited by The Muppets. 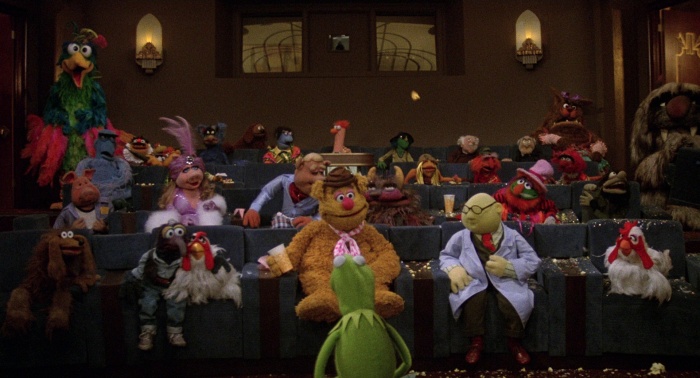 Assuming that the formula for The Muppet Movie can be attributed to the films that are about the lives of the Muppets, let’s assume that The Muppets (2011) follows a similar pattern. Thanks to the characters breaking the fourth wall, we know for certain that The Muppets is structured as the characters putting on a movie, further cemented by the opening scene of Muppets Most Wanted, which begins with the production wrap of the final shot on the last film. However, in the realm of these characters, is the film ‘a true story’ that these characters are just re-enacting for their newest film? While The Muppet Movie is undoubtedly a movie about how the Muppets got started (well, approximately) it would almost be safe to assume that The Muppets is a true life story about how the characters got together again. That could certainly be assumed if it wasn’t for one important factor…

The Characters Are Actors Within Their Own Films
The thing that is always truly fascinating about The Muppets is that the characters are actors–just like all of the actors you know in the rest of Hollywood. I mean, Tom Hanks is just the human version of Kermit the Frog anyway, and just like Tom will go back home after recording Toy Story 7, Kermit is a humble frog that certainly returns back to his swamp between films to decompress and play his banjo. We can establish that the Muppets are actors in most of their films, as The Great Muppet Caper begins with Kermit establishing this fact (“in this film, me and Fozzie play investigative reporters…”) and The Muppets Take Manhattan is the only film to date in which the characters don’t address that they’re in a movie, but the story stands as so far from the reality of the characters that we understand it to be a movie.

Additionally, the most important thing to remember is that the personalities of the characters often exist differently outside of the films, which in some opinions, are the true personalities of each character.  This only causes things to get more complex, as the characters off-screen will often speak about the roles that they play in their films. When Walter went on tour to promote The Muppets in 2011, he would discuss his fortune of perfectly fitting the role of the character, Walter, as portrayed in the script written by Nic Stroller and Jason Segel.

Thanks to super-confusing character differences both on-screen and off, perhaps the workings of the Muppets is almost that of Jerry Seinfeld and his relationship with Seinfeld. Loosely based off his life as a comedian, Jerry’s character is a shell representation of his real alter-ego, but of course, should never be taken at face value for who Seinfeld really is. We can only draw the conclusion to be the same in these films, whereas Kermit may play Kermit in which his character matches his own, but his off-screen personality may contradict that very slightly.

Where Does The Movie End and Reality Begin?
Just like The Muppet Movie, all Muppet feature films are extremely complex. The most comprehensive topic is to wonder where exactly ‘reality’ and the confinements of each movie truly begins. In The Great Muppet Caper, the movie begins after Kermit, Fozzie, and Gonzo finish watching the opening credits and crash land their hot-air balloon into a London street. Luckily, an entire production set has already been installed, allowing the movie to quickly begin with a show-stopping musical number.

Take the Muppets’ most recent feature film, Muppets Most Wanted. The film begins as the Muppets wrap production on their last movie, The Muppets, and the faux director calls a wrap on the film. Then, the characters regroup and wonder why the camera is still lingering after the wrap of the film, and conclude that the studio must have ordered a sequel. This launches the Muppets into a discussion to figure out what the plot of their next film is going to be. After a recommendation from leading actor Ricky Gervais, the plot the Muppets concede on is that the characters are going to go on a world tour.

But this is where canon for The Muppets is absolutely non-existent. Nobody can know for certain if Gervais’ plot recommendation is actor Ricky Gervais as himself, before the start of the film, or the character he plays in the film, Dominic Badguy. Additionally, from that point on, did the Muppets intend to include an entire plot about an evil Russian Kermit doppelganger named Constantine, or is the hijacking of the Muppets’ world tour one of the crimes committed by Constantine and Dominic? Perhaps the intended plot of Muppets Most Wanted was just that the characters go on a world tour, and nothing goes wrong? But.. if this was all part of the plot from the start, then perhaps we deserve more credit to the many characters who were oblivious that Kermit had been replaced by an evil doppelganger that sounds nothing like him, as that was just the role they were playing. The characters are fully aware that they’re in the movie, but at what point did the movie intended by the characters end, or was it just a movie all along?

In Conclusion: Muppet Canon Doesn’t Exist And Nothing in This World Makes Sense
Does Muppet canon exist? Absolutely not. Either the Muppets met as toddlers in Muppet Babies (all believed just to be the imagination of Miss Piggy in The Muppets Take Manhattan) or they met in their origin story of The Muppet Movie, or they met when an ambitious frog decided to rent a theater to put on a production titled The Muppet Show. Did the Muppets’ truly disband The Muppet Show and their theater in the late ’90s, leading to a diehard fan needing to recruit the band? Probably not, but instead it was probably the studio who approached Kermit to pitch the idea for the film. While the new era of the Muppets seems to attempt to have some sort of canonical continuity between them, (like the upcoming series that may or may not take place after The Muppets Take Manhattan), it’s continuously evident that none of this makes sense and to attempt to do so results in more confusion than possible.

Thank you all for coming to my TED Talk.