What was Sundered and Undone:  Brea faces a hard path of committing a small betrayal for the greater good after abandoning the Order of Lesser Service. Rian deals with being a falsely accused fugitive. Aughra pays the overindulgent Skeksis a visit and has a conversation with herself. Deet has the naïve idea to trust her fellow Gelfling and it ends in Hup starting a bar fight.

The First Thing I Remember is Fire: Deet rescues Hup from the rascal hole and trouble ends up finding them. Chamberlain is mad that the General took his spot at the big boy table so he calls in someone for terrifying to do the job for him. Brea has an anti-racism puzzle to solve and Aughra needs to take a ten-mile hike for a Mystic to point out the obvious. 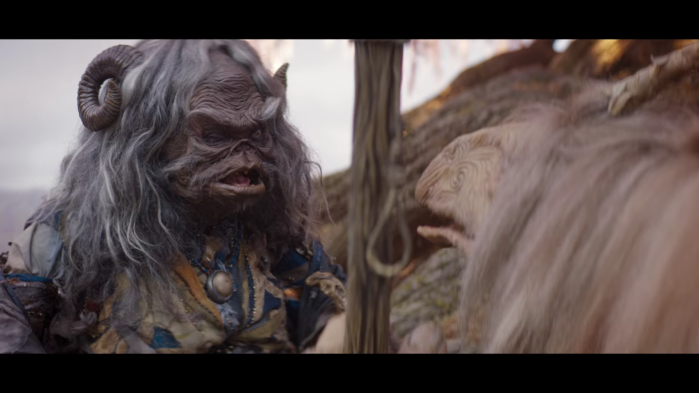 Marni Hill – After putting up with the many Dumbledores of fiction, may I say that Aughra is truly a breath of fresh air in this series. It’s quite tiring to constantly put up with immortal, omnipresent characters who merely sit back and let the heroes do all the work instead of applying the knowledge they have accumulated over time and actively getting involved. As previously stated, Aughra is Thra and Thra is the Crystal. If Aughra is getting involved, that means the Crystal is desperate to fix things before it’s too late.

Aughra has her own lesson in overcoming ignorance, which is an even greater deviation from other characters of her status. Even being omnipresent can’t stop one from become blind to certain truths, in Aughra’s case, it’s to the point of forgetting that the answer has always and will always be Thra. The Skeksis had managed to lead her away from her duties, turning her to the sweet temptation of materialism and in her haste, she started to forget the obvious. If she wants to hear Thra’s Song, then she better start listening to Thra. urVa the Archer shouldn’t have had to point that out. Kudos to the writers for pointing out that even the wisest of characters still have lessons to learn.

Meanwhile in the Castle of the Crystal, the Skeksis are continuing their feebleminded politics which leaves me questioning how they could believe they can pull off mass genocide when they can’t even solidify their interpersonal relationships. skekTek is stuck in his lab with his various pets that make him seem almost sympathetic (something I plan on getting back to in a later review). skekSo is pulling chunks of himself off at the dinner table for a reason we don’t find out until later while Chamberlain and the General reach their breaking point (with the breaking mainly being Chamberlain’s hand). Chamberlain continues to be one of the most intriguing of the series, pulling twists and turns I certainly wasn’t expecting. Calling in skekMal the Hunter on the coolest horn I have ever seen (well done to the prop makers), Chamberlain is even willing to defer to someone else if it means he’ll get his precious emperor-side seat back.

What is there to say about Rian’s arc so far other than it being extremely unfortunate and tragic? To have his own father come after him and believe him to be delusional, ill, infected with heresy is nothing less than horrible. However, Ordon is coming after him out of concern for his son. Despite his ignorance regarding the Skeksis, Ordon is not a bad Gelfling. This becomes very clear when he is comes upon Rian dream-fasting with the group and is willing, against the Skeksis lies, to join in and finally listen to his son. His death, while narratively inevitable, is sad but heroic, yet another martyr to stir the fires of rebellion within Rian’s heart. That is, if he can escape skekMal first.

Did you know Gelfling are actually quite racist? Not even quietly racist either. Loudly and obnoxiously so. Honestly, I don’t blame Hup. I, too, would lose my cool if someone insulted my adorable Grottan travel buddy.

Episodes 3 &4 oversee the beginnings of a social and cultural intertwining that has clearly not been seen in Thra for trine upon trine. I have an inkling the Skeksis may have had a hand in keeping the Gelfling to their factions, allowing for stigmas and rumours about the other clans to fester over time. All the better to keep the masses blinded in their ignorance, right?

Brea and Deet each find themselves being challenged by this issue in their own respective ways. Something I’ve come to appreciate about Deet is that while her naivete makes her a magnet for trouble, it also nurtures her natural desire to see the good in others. Her instant friendship with Hup is a prime example of this. Upon stepping into Stone-in-the-Wood, she simply wants to explore and greet everyone as she has been doing in the forest, despite Hup’s best efforts to warn her that a Grottan gelfling is not likely to be welcomed.

They ridicule her clothing, her hygiene, the green tinge of her skin and even rudely question the population status of her clan. Hup, with nobility and righteousness that would leave Sir Didymus swooning, takes on full-grown Gelfling to defend Deet’s honour and pays for it with a trip to the local rascal hole.

And here is where Deet earned her spot as my favourite of the three main protagonists: she doesn’t accept this injustice. At all. Underneath that sweet exterior is a determined and fierce young woman who can and will retaliate with her vast resourcefulness. She proves to be an excellent strategist, using her special moss and her experience in the shadows to freak out the Stonewood Guards in a masterfully crafted scene aligning with that of a horror movie. Her later determination to help Rian against the likes of skekMal the Hunter just solidifies the brilliant writing behind this character.

Brea’s challenge in bringing Lore to life came with some heavy decisions to make, forced to choose between her mothers’ choices on her part and the path Brea must pave for herself in order to achieve a better outcome. The interaction with Onica is another example of the systematic stigmas against the Sifa Brea has been raised to believe, following the mishap with Elder Cadia, foreshadowing the answer to the puzzle under the throne. It’s quite satisfying to watch Brea slowly learn that being book smart is one thing, but true intelligence is the ability to analyse the evidence for yourself and to draw your own conclusion. The balance of Thra isn’t in the many outweighing the few, but everyone being able to stand together as one. And thus, Lore was born.

One of the biggest thrills of watching The Crystal Calls was learning Lore was actually built as a puppet. A creature of his design tends to make you believe that it would be easier to use CGI, but that’s the beauty of this series. Moments such as skekMal running through the treetops are the exception, but the Creature builders and puppeteers pulled out all the stops to use puppetry, no matter how complicated the puppet could potentially be. Lore is beautiful and one of the best puppets to ever come from the JHC in a very long time. 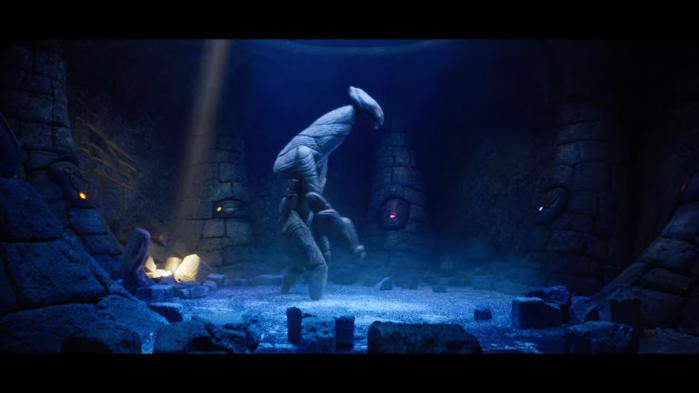 Four episodes in, the narrative has become far more cohesive and the careful intricacies of each character’s story arc is starting to shine through. The writers have done an exemplary job of ensuring that the characters influence each other just as much as the story’s events do. The cinematography is beautiful, catering to each scene as needed, whether giving Deet’s stunt as a “monster” a perfect horror feel, or giving us unnecessary underwater shots of the Scroll keepers crotch we cannot un-see no matter how hard we try to erase it from our minds.

What can I say folks? It just keeps getting better.