Jarrod Fairclough – We’re less than 2 weeks away from the first episode of Muppets Now debuting on Disney+, and so far we’ve had very little idea of what to expect.  Sure, we’ve had trailers, and Joe the Legal Weasel has sent out a statement, but now Disney have released the descriptions of the first 5 episodes.  Of course, there are only 6 episodes, so who knows what happens in Episode 6?  Maybe it’s the leaked rumor of Sweetums snapping and going crazy?*

Anyway, here are the descriptions – and no, we haven’t made an error; they really do mention Taye Diggs and Linda Cardellini this much.

Muppets Now Premiere Episode 101 – “Due Date” (July 31)
Muppets Now is The Muppets Studio’s first unscripted series and first original series for Disney+. In the six-episode season, Scooter rushes to make his delivery deadlines and upload the brand-new Muppet series for streaming. They are due now, and he’ll need to navigate whatever obstacles, distractions, and complications the rest of the Muppet gang throws at him.

Muppets Now Episode 102 – “Fever Pitch” (August 7)
Fozzie Bear has some big ideas for Muppets Now, and there’s no time like the deadline to start pitching! He’s found a very tough audience in Scooter, who just wants to finish uploading the latest delivery. We see the very first episode of a game show that Pepe The King Prawn totally just made up. The Swedish Chef tries to cook a better molé sauce than his competitor, Danny Trejo. Dr. Bunsen Honeydew has replaced Beaker with a new smart assistant, and things get fired up. Miss Piggy and her guests, Taye Diggs and Linda Cardellini, show viewers how to work it out when they share the secret to staying healthy.

Muppets Now Episode 103 – “Getting Testy” (August 14)
Joe, the new legal counsel for The Muppets, interrupts the scheduled delivery of Muppets Now to announce that all streaming content must be vetted by a focus group. Things go from bad to worse when Scooter meets up with the assigned test audience – curmudgeonly critics Statler & Waldorf. The Swedish Chef collaborates with Chef Roy Choi as the two try to make a one-of-kind kalbi bowl. Dr. Bunsen Honeydew and his assistant, Beaker, enlist a Pizza Delivery Person (Al Madrigal) to explore velocity. Miss Piggy and her guests, Linda Cardellini and Taye Diggs, dig deep into the workings of a healthy relationship. Pepe The King Prawn’s unbelievable game show features new contestants, new challenges, new rules, and no planning at all.

Muppets Now Episode 104 – “Sleep Mode” (August 21)
Scooter wakes up in horror to discover his all-nighters have finally gotten the best of him, and he has only 30 minutes to upload Muppets Now. With the clock ticking and his eyelids drooping, Scooter enlists Animal to help him stay awake. Dr. Bunsen Honeydew and his assistant, Beaker, conduct a series of vibrational experiments with the help of a lonely, outdated computer. The Swedish Chef uncovers the secrets of Spaghetti Carbonara when staring down his competitor, Giuseppe Losavio. Miss Piggy sits down with Aubrey Plaza to conduct a fabulous one-on-one interview. Later, she looks out for number one as she focuses on self-care with guests Linda Cardellini and Taye Diggs.

Muppets Now Episode 105 – “The I.T. Factor” (August 28)
Chip the I.T. guy installs an upgrade to Scooter’s overtaxed computer just as Scooter is beginning to upload the latest episode of Muppets Now. Scooter must work fast to get everything in place before the hard reboot goes into effect. Miss Piggy takes a trip through the topic of travel with guests Linda Cardellini and Taye Diggs. Pepe The King Prawn makes up a new game show on the spot, and the contestants do their best to keep up. Uncle Deadly demonstrates the drama, disciplines, and danger of stage combat for Muppet fanboy, Walter. Dr. Bunsen Honeydew puts the pressure on his assistant, Beaker, with a hydraulic-press experiment that requires a personal touch. 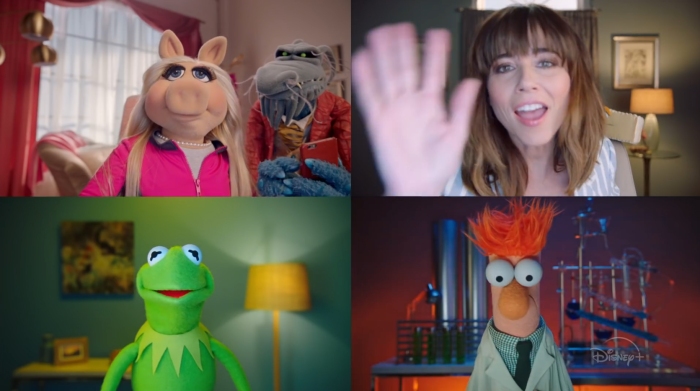 *Come on, how many of you fell for that?